Seattle: Wide awake on the coffee and grunge trail 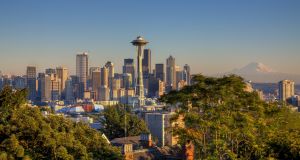 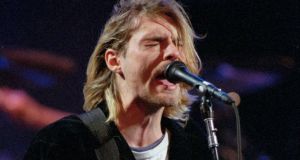 The last time I was in Seattle, it was by accident. A missed flight meant a detour on the way to San Francisco, and I cut a bleary-eyed figure trudging through its airport. This time, I am paying more attention and descending into Seattle is a fresh surprise with its tall trees and lush green landscape. Driving into the city, we pass the immense port, the third biggest in the US, crowded with cranes and the Lego of shipping containers.

Seattle was once just a place to pass through. In the late 1800s, it was the Gateway to Alaska through which the “stampeders” passed during the Klondike Gold Rush. Even today, people just spend a night or two here before boarding one of the many Alaskan cruise ships that leave from its port, but there is plenty of exploring to be done in Seattle’s own streets.

We are staying in the Fairmont Olympic Hotel, a landmark grand dame of Seattle located downtown. The Ramones played in the Georgian Room here in 1977; starting what some say was the domino effect that led to grunge. The Eagles once had an impromptu jamming session in the penthouse and invited up the doormen. But it’s not the Chelsea Hotel. It’s one of those beautiful high-ceilinged old-money hotels that would cost you a small fortune in Ireland but are somewhat more doable in the US.

In what turns out to be a theme in Seattle, sustainability is a focus for the hotel. Up on the roof, there’s a “Bee Hotel” built from old kitchen pallets, where the chef produces his own honey, and an organic garden, which the staff work on voluntarily. The honey is incorporated into several of the delicious seasonal breakfast dishes.

On the first night, we have dinner in the Purple Café on Fourth Avenue, across the road from the hotel. Shelves of wine here are two storeys high and we sample some of Washington’s own vintages, and eat the famous Seattle salted caramel.

The next morning, well fed by the bees, we set out to investigate Seattle’s thriving art scene. Seattle Art Museum is a short walk away and there, alongside modern works, you can see sacred artefacts of the Native American people who lived here for 4000 years before the European settlers. (Seattle is named after a Native American chief.)

One item on display, a soulcatcher with embedded sapphire eyes, was used by Tsimshian shamans to catch lost and bewildered souls that they believed had left the body through fright or dreaming, causing chronic illness. I feel a bit bewitched myself just looking at it and step back from the case.

Next, we head to the entirely different vibe of Bubblegum Alley and its colourful walls of dried chewing gum. It’s packed with tourists popping bubbles to add their own contribution and I still can’t decide if it’s sickly or sweet. Though I do take offence to the suggestion it’s only the second “germiest” attraction in the world after the Blarney Stone.

From there, we meet our bubbly guide Emily and embark on the Savour Seattle Food Tour in the famous 109-year-old Pike Place Market, a cobblestoned thoroughfare by the water under an iconic neon red sign.

We pass stands of gorgeous cheap peonies and gleaming Washington Rainer cherries and eat some delicious samples: cheese curds from Beechers, (one of Oprah’s favourite things so you’d have to), and cabernet chocolate Chukar cherries, then crabcakes and chowder and piroshky, oh my.

The tour is probably the best way to bypass the huge queues here and we are stuffed to the gills with samples, death by a thousand gluts. We watch the fishmongers throw salmon across the market to each other and sing. They sell fresh scallops here the size of your fist.

And more environmental consciousness: a huge “Harvester” processes the food scraps from the vendors into organic liquid fertiliser, which you can buy there.

The market is home to the original 1971 Starbucks. On the window, you can see the original Starbucks logo from braver times when the coffee cup Siren still bared her mermaid breasts. As expected, there are coffee shops on every corner – Starbucks yes, but also independent gems such as Biscuit Bitch, from which I bought a bag of Bitch Brew that smelled so delightfully pungent that I expected to lose it to a discerning customs officer’s cafetiere on its journey back to Ireland.

While still a town with an incredible musical heritage – Jimi Hendrix was born here – everyone I speak to seems far more excited about Jeff Bezos’ sprawling new Amazon campus, or Expedia moving its headquarters across town. Boeing and Microsoft were established here so perhaps it was inevitable it would become a Silicon Valley. Property prices are rising steadily and artists and musicians are getting pushed out. Money trumps culture. Driving through the trendy neighbourhood of Ballard, Expedia’s new home, I see a tent park – one way the city deals with its homelessness problem, the fourth largest in the US.

The birthplace of Nirvana, the Seattle grunge scene now seems as much a thing of the past as Nirvana’s broken guitars, which lie behind the museum glass of the EMP Museum. Old clubs are being sold to developers. (Although our driver Patrick is delighted to impart that Eddie Vedder lives just around the corner from him).

The EMP is the metallic Frank Gehry-designed building in the shadow of the Space Needle, considered a delight or an eyesore depending on whom you talk to, and dedicated to music history and sci-fi. Trekkies can see original set pieces and uniforms.

Within walking distance from the EMP is the Chihuly Garden and Glass where you can view the colour and play of artist Dale Chihuly and a garden where nature and sculpture become barely distinguishable.

We eat dinner at the top of the famous 605ft Space Needle, in its revolving restaurant. It was built for the 1962 World State Fair and still earns its keep with views of the spinning globe of the old Seattle Post-Intelligencer newspaper building, the sunset and huge cruise ships waiting in the harbour. It is pricey but a once-off, and every so often you pass a pianist at a baby grand performing gentle Ed Sheeran covers.

Nightcaps are had in the Rock Bottom Bar and after two of the world’s strongest margaritas, sleeplessness is not a problem.

Seattle is more a good food town than a party town, I am told. So brunch the next day is in Salty’s in West Seattle, a waterfront restaurant where for just under $50 you get a plate and hit the buffet as many times as you like. Salty’s never heard of #eatclean so leave your avocado notions at the door. There are no tossed salads and scrambled eggs, but there is good seafood, prime rib and a Bloody Mary bar with garnishes of chocolate bacon. There is fruit too, but it lies in the shadow of a chocolate fountain. The abundance nearly has some reverse psychology effect of making me shy away – nearly. Across Elliott Bay, you can watch speedboats and floatplanes rush past the Seattle skyline of the Frasier credits.

On my last day in Seattle, we head for Pioneer Square where traditional shop fronts, ornate lampposts and flower baskets give the place an English country charm. We go on Bill Speidel’s Underground tour to see the place Seattle used to be. After the Great Fire of 1889, the city was rebuilt at a higher level for drainage reasons so subterranean shop fronts, taverns and brothels are entombed underground. The original Skid Row is also here, a road down which logs were skidded toward a mill.

A visit to the innovative Seattle salmon ladder built in 1976 to help salmon migrate upstream through the Ballard Locks, where seawater and freshwater meet, may not sound too thrilling. But watching through murky glass as baby salmon battle the current alone to get to their destiny was oddly inspiring, a real-life Monday morning gift.

Not that we wouldn’t eat them. The last Seattle supper was the signature dish of black cod (or sablefish here) in Ray’s Boathouse in Ballard, with views of the Olympic Mountains.

On the way to the airport, we drive past the Edgewater Inn, the venue for Led Zeppelin’s infamous shark incident (Google it, ahem), past the restaurant where Tom Hanks eats in Sleepless in Seattle, past the building where Demi Moore sexually harasses Michael Douglas in Disclosure.

Then we head up steep hills to Kerry Park for the best view of that skyline. On a good day here you can see Mount McKinley, but more fittingly, we take our final photos in Seattle’s ever-present misty rain.