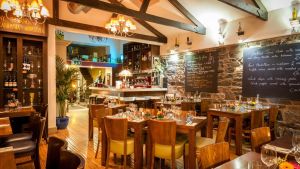 This restaurant feels like an act of imagination. It’s down from street level but is flooded with light. Under its glass roof are the ceiling beams of a Tuscan farmhouse, as if outside the sun were beating down and animals bleating. The reality is more biting wind and endless traffic, but here there is a staff of smartly dressed Italian waiters, all male, all business, apologising to at least three groups of hopeful eaters as all the tables in this imaginary Italy are booked.

We have squeezed into Il Caffe di Napoli by the skin of our teeth with an early arrival and a promise that we are fast eaters in the annex to the main room. It’s cheerful enough: a tiled floor, low ceilinged space, walls lined with bookshelves and a table cloth that’s fern green velour with a few patches where hot plates have worn the nape. It all adds to the feeling of stepping out of downtown Dublin and into some gentler space.

The restaurant is on Westland Row, just down from Pearse Station and beside a scaffolded building that can only have added to the challenge of maintaining serenity within its walls. There’s a cafe upstairs; the restaurant itself opens tardislike into pretend stone farmhouse.

The Royal Irish Academy of Music sits on the other side of the restaurant, and my friend is on her way there later for a masterclass. Il Caffe di Napoli is, she has been told, virtually the unofficial canteen of the music school. It seems apt given how much of the grammar of classical music is Italian.

The menu is a hooked-on-classics rendition of all the favourites. Mushroom bruschetta are made with hot toast that is like the baby a focaccia and a loaf of batch bread would have – leaning more heavily on the batch side of the gene pool. The mushrooms are fine. They need some good olive oil and a pinch of salt to make them sing.

I have the arancini di riso, two snooker-ball-sized offerings of chewy, stringy, cheesy rice coated in crumb and drowned in a tomato sauce that could have been reduced a little less to retain more of its fresh tomato flavour. There’s an olden-days salad of leaves with chunks of cucumber on the side, nicely dressed and fresh.

My fish casserole is the best savoury dish we get, although it seems to have none of the clams promised on the menu. Instead there are juicy mussels, chunks of smoked white fish (haddock, I’m guessing) and gnarly rings of calamari in a gutsy tomato sauce. It’s a properly authentic version of this dish, made with the fish that needed some stewing and tomato flavour to make it work, a rustic use of the humbler pieces of fish. There are toast soldiers from the batch-bread school on the side, to mop up the sauce.

My friend’s ravioli are matchbox-sized parcels of ricotta and spinach with more of the tomato and basil sauce poured over them. They’re fine, but the pasta has a plasticky, chewy texture and tastes of a preprepped dish rather than something freshly rolled, pinched and boiled by a sad-eyed woman in a housecoat sitting at a floury table with a slowly ticking clock on the wall and a sleeping cat curled up in an armchair. But perhaps that’s fantasy Italy taken to the extreme.

Classical sums up Il Caffe di Napoli. Nothing reimagined or overworked. This is a restaurant that knows what people like and rolls it out without anyone trying terribly hard

We fall on the shared dish of cannoli with glad spoons. I’m surprised these biscuity tubes don’t turn up on more menus. The tube can, presumably, be made in advance and then filled with the fluffy, creamy sweetened ricotta to order. That’s what has been done here, and the cheesy filling is made with buffalo ricotta from Naples. “It is the secret,” our waiter tells us when we turn gooey eyed about the cannoli. Along with the sweetness there’s some citrus zest, a raspberry and a base of nutty chocolate, which is as close to Nutella, that Italian delicacy gone global, as you’ll find on a dessert plate.

Classical sums up Il Caffe di Napoli. Nothing reimagined or overworked. This is a restaurant that knows what people like and rolls it out without anyone trying terribly hard. One person’s lacklustre staple is another person’s comfort dish, and Il Caffe di Napoli seems to have cornered a loyal clientele. It’s the pasta and pizza of the trattoria on one side and a fish stew and cannoli that feel more like home cooking on the other. As good lunch choices go, it’s the gutsy rustic cooking that would be mine.

Lunch for two with a glass of wine and two coffees came to €67.35