Bracing outdoor pursuits, vibrant nightlife and showstopping restaurants make for one of the most lively weekend breaks in the country 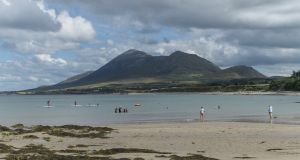 Along with ‘The Reek’, Westport offers a large range of outdoor activities. Photograph: Brian Cregan

For many years, Westport as a destination appeared to play second fiddle to its nearby relative, the rugged, enchanting Connemara. But that was then, and this is now. In fact, Westport – a three-hour drive from Dublin – is fast shaping up as one of the most lively weekend breaks in the land. A number of new initiatives and businesses, thanks in no small part to its location on the Wild Atlantic Way, have breathed a whole new energy into the town once known primarily as the location of ‘The Reek’. The 764m-high Croagh Patrick has long been a destination for religious pilgrims – a tradition that stretches back more than 5,000 years. Yet in more recent times the Christians have shared the mountain with those who are interested in being rewarded after a two-hour climb with breathtaking views over Clew Bay.

Year-round, however, Westport is more than just a one-mountain town, blending as it does a brilliant stew of Georgian history, family-friendly amenities, bracing outdoor pursuits, vibrant nightlife and the odd show-stopping restaurant. Perennial favourites like the superb Old Head Beach, on the Louisburgh Road, have kept Irish people coming to the area for years in the summer months. New amenities have attracted a fresh following, making Westport a none-too-distant relative of the likes of Kilkenny or Killarney.

Still, Westport is a town that seems (just about, and for now) able to hold a sense of tourism overload and general paddywhackery at bay.

This weekend sees the inaugural outing of Westival, formerly the Westport Arts Festival (runs until October 29th, see westival.ie). Offered a facelift after 42 years in operation, Westival is a multi-venue event with a busy schedule of music, theatre, literature and visual arts events.

Where Croagh Patrick is best described as Westport’s geographical centre of gravity, Westport House has become its linchpin (tickets from €12.35, see westporthouse.ie). The 480-acre grounds are sandwiched between the quays and the town centre. It was famously home to the Pirate Queen Grace O’Malley in the 1500s, although the current house – a prime slice of Downton Abbey splendour – was built by her descendants, the Browne Family. Much effort has been expended in preserving Westport House’s olde-worlde opulence, and the results, coupled with a very helpful and informative front-of-house staff, are fantastic. In the 30 rooms open to the public, there are thousands of artworks and historical artefacts on display.

Local brothers Cathal, Harry and Owen Hughes bought Westport House for an undisclosed sum from the Brownes, who had been in the house for 400 years, in November 2017. The brothers are in the midst of planning a reported €50 million restoration. “The house needs a lot of work,” Owen says. “We knew when we purchased the house that it was a long-term project. The [restoration] plans are very detailed; people won’t see where the money is spent, but it will stand to the house for another 300 years.”

The on-site Pirate Adventure Park is expected to receive a boost in the forthcoming restoration, although in its current incarnation, it makes for a good kid-friendly morning (along with a host of other amenities within the grounds, among them pony rides, go-karting, swan pedalo boating and archery).

Weather permitting, Westport’s great outdoors can be enjoyed via Adventure West (adventurewest.ie), which offers guided kayaking trips to Old Head Beach, where groups can kayak right into the caves surrounding Clew Bay. The company also offers zorbing, zipwires, rock-climbing, abseiling and hill-walking afternoons, so if milking the best of Westport’s great outdoors is of interest, this company should certainly be among your first ports of call.

Clew Bay Bike Hire (clewbaybikehire.ie), meanwhile, offers various packages to those who’d rather stick to two wheels. These include options of outbound or return shuttles, children’s bikes or trailers for toddlers, electric bikes, roadside assistance and a return boat trip via Clew Bay.

One of Westport’s newer kids on the block is the Mescan Brewery (mescanbrwery.com), a working brewery on a working farm at Cartoor, Kilsallagh, that is certainly worth the 20-minute drive. Ireland has seen a proliferation of microbreweries, but Mescan stands out. A partnership between Irishman Cillian Ó Móráin and Belgian Bart Adons, Mescan was born when the pair – who met in the UK while working as vets – decided to turn their love of brewing Belgian beer into a full-time pursuit. Much of their vet/farming equipment has effectively been upcycled to brew Belgian beers that range from effervescent blonde beers to heady stouts. They offer regular tasting tours (with cheese aplenty)and their beers are available across Westport; recently a small trial batch of their Red Tripel somehow made it to Dublin without their knowing, and sold out immediately. They’ve been inundated with enquiries from the capital since.

Job done on building up an appetite with a range of activities, Westport’s restaurant scene is building to a decent buzz. An Port Mór on Brewery Place and Knockranny House at Knockranny have long been established as safe bets in the town. Euro-Toques chef José Barroso and his Westport-born wife Sinead Lambert run Sol Rio on Bridge Street (solrio.ie), and are doing wonderfully inventive things with locally sourced food.

Cian’s On Bridge Street (ciansonbridgestreet.com) was awarded the ‘Best Connaught Restaurant’ at the Irish Restaurant Awards, and its owner Cian Hayes has been collecting superlatives ever since. And not without reason: modern dishes abound on the menu – think goat’s cheese ice cream with pineapple and pickled shallot, or monkfish with curried cauliflower, mango chutney and yoghurt. Unfussy and casual , the restaurant deserves its many garlands.

Bar-hopping can be a hectic, if diverse enough, pursuit. The Gallery Westport (Brewery Place, thegallerywestport.com) has been mooted as Ireland’s best wine bar, and not without justification. The traditional Mac Brides Bar on Bridge Street, McGing’s on High Street and Campbell’s Bar at the Murrisk offers a change in pace, albeit a more traditional one. Matt Molloy’s is certainly not a new addition to Westport’s nightlife scene, but is legendary for its trad music sessions and general sense of bonhomie.

Its owner, Chieftain’s member Matt Molloy, is something of a local legend, and he (and, on most days, his Grammy award) can be seen hanging out and soaking up the atmosphere in the labyrinthine bar. In fact, Matt Molloy’s makes for a rather neat microcosm of the town as a whole: there’s plenty to see and do there, albeit with some welcome quiet pockets. And when it comes to soaking up a vibe that strikes the balance between laid-back, charming and unassuming, its visitors are rarely left wanting.

Westport boasts a number of family-run hotels, among them the centrally located, three-star Clew Bay Hotel (clewbayhotel.com), in the heart of the town on James Street. Ask for a quiet room at the back, overlooking the babbling river. Among the special rates on offer at the time of going to press are a two-night stay with one dinner for €75 per person sharing.

Closer to the Quays, where trendy shops, art galleries and cafes are in no short supply, the four-star Westport Coast Hotel (the Quay, Cloonmonad, see westportcoasthotel.ie) boasts magnificent views. Rooms are from €98 per night (be sure to ask for Gigi, who offers divine Ayurvedic treatments in the hotel’s spa).