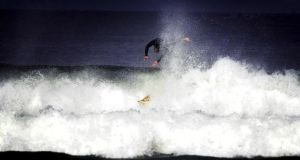 A surfer in Strandhill Co Sligo – one of three non-Blue Flag beaches on the TripAdvisor list. Photograph: Bryan O’Brien

Rugged, windswept, and a bit untamed. Sounding not unlike a cliché from a romantic fiction novel, that is how Irish people like their beaches, according to the results of the annual Travellers’ Choice “Best Beaches” survey on TripAdvisor.

Banna Strand in Tralee, Co Kerry heads the TripAdvisor top 10 beaches in Ireland 2017 list, as voted for by the public in the Travellers’ Choice Awards. The Atlantic Ocean beach, 12km north west of Tralee, moved up from seventh place in the rankings last year and sixth in 2015.

Inchydoney beach, near in Clonakilty, Co Cork, another vast expanse of sand and sea rather than a cosy cove or intimate inlet, is the second best beach in Ireland, according to the survey.

Inchydoney, popular with surfers, kayakers, and those in search of “the cure” at the nearby thalassotherapy spa, previously topped the ratings for three years in a row between 2014-2016.

Kerry dominated the awards, with three of the top four beaches being located in that county.

Derrynane beach, just outside Caherdaniel on the Ring of Kerry, took third place in the poll.

Another Dingle beach, Coumeenoole, was voted the sixth best beach in Ireland, completing a four out of 10 sweep of the top rankings for the county.

Strandhill beach in Co Sligo was the people’s choice for fifth best beach, and Cork got another look in with Barleycove beach near Schull finishing seventh.

Wexford (Curracloe), Donegal (Narin/Portnoo) and Galway (Dog’s Bay) each got one beach into the rankings, filling eighth, ninth and 10th slots.

Nine out of the top 10 beaches are located on the Wild Atlantic Way, with only Curracloe being outside the designated touring route, which runs from Donegal to west Cork.

All but three of the top 10 – Strandhill, Coumeenoole and Dog’s Bay – were accorded Blue Flag bathing status in 2016, meaning they met the requirements of the EU Bathing Water Directive. The Blue Flag programme is administered in Ireland b y An Taisce.