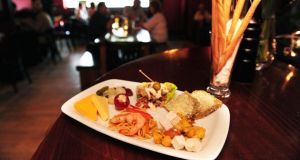 Secret Europe, 50 Truly Unforgettable Experiences to Inspire Your Next Trip includes the hidden beauty of Kerry’s Cromane Peninsula at a haughty number five in its list, while noted Dublin pub John Kavanagh’s, more widely known as the Gravediggers, creeps in at number 46.

The compilation, which focuses on “undiscovered and overlooked destinations and experiences” in Europe, plumped for the Cromane Peninsula, a lesser-known detour off the popular Ring of Kerry trail, because of its “spectacular water vistas and multihued sunsets”.

The peninsula, which boasts an idyllic fishing village along with pristine views of the nearby McGillycuddy Reeks, typifies the majestic scenery and serenity which somewhat ironically makes the surrounding region such a famed tourist hotspot.

One of the capital’s most famous haunts, Kavanagh’s pub has always been synonymous with the nearby Glasnevin cemetery, from where the nickname Gravediggers derives. Although he’s never touched a drop, owner Eugene Kavanagh is delighted to see one of the country’s oldest family-run pubs get a bit of attention.

“It’s an original pub, and I’m the sixth generation Kavanagh to run the joint. I still live over the premises and reared a family here. We’re a traditional pub and we carry on as we’ve always done, but to be successful you also have to be different - which we also are,” said Mr Kavanagh.

The Czech town of Olomouc tops the list of places to visit with its charming main square, while Italy and the UK, which boasts the Kinmel Arms in Wales as its highest-ranked entry at 26, share the most mentions in the list, with five each.