World-class hotel is a delight, thanks to a restoration and its friendly, expert staff 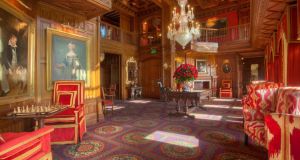 ‘Would you like something to eat or shall I start the film straight away?” There were only two of us in the cinema, plus the waiter; 32 plush red velvet Pullman seats arranged in an elegant crescent in front of a large screen. On pause were the opening credits of High Society, the 1956 musical starring Bing Crosby, Frank Sinatra and Grace Kelly.

We settled for popcorn and drinks, which came on a silver tray along with some chips and a bag of pick ’n’ mix. (“I figured you’d enjoy these too,” the waiter said. He was right.) As we tucked into our chips I began to understood that Ashford Castle isn’t just another elegant country pile but a world-class hotel that bears its five-star status with ease.

The absence of any consistent, recognised standard of excellence makes an imperfect science out of the star system. And so a hotel that merits no more than four stars can casually lob on an extra one for the added cache and bumped-up room rate; lodgings little better than decorated shoe boxes can parade as three-star; while, at the other end of the scale, a hotel can declare itself the most luxurious property in the world merely because it has seven, self-assigned stars next to its name.

Ashford’s five stars gleam brighter than ever thanks to a two-year programme of restoration that has seen the addition of new amenities such as the cinema, and a billiard room, where I played a frame of snooker against the bartender. The hotel’s 85 rooms and suites have also been spruced up, with new technology (underfloor heating in the bathrooms, fancy flat-screen TVs) and old antiques (Room 332 has a pair of Elizabeth II coronation chairs; Room 329 a pair of pier cabinets from the early 19th century). By July the spa should be open, along with a games room for the kids and wine cellars, where guests can dine privately.

Ashford’s comfort levels and amenities are in line with any top-end European hotel, but what cements its five-star status is the staff’s seamless interaction with its guests. Your every need is expertly attended to, but it’s done with friendliness and warmth from the moment you arrive at the front gate to the moment you say goodbye.

We sunk into the armchairs to watch Crosby, Kelly and Sinatra play out the lovable farce. I’m hardly high society, but Ashford Castle made me feel like I was.