Wine country: How to drink your way around Europe’s best vineyards

Less developed for tourism than California, the wine regions of France, Spain and Portugal are all the better for it 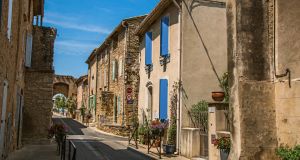 The stone houses in the centre of Châteauneuf-du-Pape

For wine lovers, there are few better ways to spend a weekend than visiting some of the wine regions of Europe. While they are often less developed for tourism than the wine regions of California, where you often have to book your wine-tasting in advance (and pay top-dollar), they are all the better for it.

Joining an organised trip can make the journey hassle-free, but doesn’t allow you to stop when and where you want, should you spot the perfect village or vineyard along the way. With some advance planning (over a glass of wine perhaps), independent travel can be the best way to go.

Don’t forget to have the vineyards ship a case of your favourite of the wines you tasted home; there is nothing like the smell and taste to remind you of your trip.

Aer Lingus and Ryanair fly to the southern regions of France, so depending on the season, you can get to the Rhone Valley from Marseille, Montpellier, Carcassonne or Nice. Pick up a car at the airport and within an hour or two you’ll be driving through wine country, heading to the famous Rhone wine town of Châteauneuf-du-Pape.

About 17km north of Avignon, Châteauneuf-du-Pape is the site of a castle built for the pope in the 14th century, when the papal base was in France. Though now in ruins, you can still visit the pope’s castle on the hill in the town. The village has other historic places to visit – a château dating from 914, a church built in the 1300s – but the real draw are the many tasting houses from the famous Châteauneuf-du-Pape AOC that line the streets. Set in pretty stone buildings, you can ditch the car and spend an afternoon learning about the wines, tasting and deciding what to ship home, in whichever cellar catches your eye.

Venturing beyond the village, you can drive to other southern Rhone wine villages. Gigondas wines are regarded as the “little brothers” to Châteauneuf-du-Pape, so while not as famous, they are often less expensive. Surrounded by mountains, the ancient, pretty village of Gigondas is well worth a visit and a trip to some tasting rooms. Rasteau and Cairanne wines are also highly-regarded, so you might find yourself venturing to visit vineyards in those areas.

While the village of Châteauneuf-du-Pape has a population of only about 2,000, it has a number of good restaurants. I love La Mère Germaine (lameregermaine.fr; rooms from €80), in the centre of the village. It’s a small hotel with simple rooms and charming service, but the restaurant is the real draw. The menu changes daily and is small but serves the best of the season, beautifully presented. You will also get great advice on what wine to have with your meal from the owner – and it’s not likely to be the most expensive.

Le Pistou is a simpler affair, but the food is very good and reasonably priced. For an upmarket experience, La Table de Fines Roches, about 2km from the village, is set in a beautiful château and offers a range of gourmet menus and fine wines.

Both La Mère Germaine and La Château Des Fine Roches (chateaufinesroches.com; rooms from €200 in high season) offer accommodation, but it’s also worth checking out Airbnb for small apartments in the village. Some are above tasting rooms and offer free wine-tastings with your stay.

La Rioja is probably the best-known wine region in Spain. Situated in the north of the country, a few hours inland from San Sebastian and Bilbao, Rioja is famous for more than wine; the running of the bulls in Pamploma for example, or the fossilised dinosaur footprints, which are well-preserved in the region.

Wine, however, is probably the best reason to visit. Base yourself in the official regional capital, Logrono, or in Haro, regarded as the wine capital of Rioja. Fly from Dublin with Aer Lingus to Bilbao or with Ryanair to Biarritz, just over the border in France.

There is written evidence of winemaking by monks in the Rioja region from about 800AD. It became so important to the region that in the 1600s, carts were not allowed through some streets in Logrono, lest the vibrations have an adverse effect on wine stored there. Visit the Rioja Cultural Centre, in a beautiful 16th-century palace, to learn about the region’s wine before visiting the vineyards.

Many Spanish wine fans in Ireland will be familiar with the well-regarded Faustino label, and you can visit their pretty bodega just outside Logrono city centre. The home of the equally familiar Valdemar wines is close too, and their bodega visit includes family-friendly activities to learn about viniculture.

Haro is smaller than Logrono, but with plenty of historic buildings and architecture. An on-street “wine train” will take you around the sights. Many producers have tasting houses in the town, so you can taste the Cvne and Muga wines without a designated driver.

Haro is famous for its wine festival, celebrated in June. It starts innocently enough with a procession to Mass but once that’s over, a huge wine fight starts where everyone ends up soaked from head to toe. It only ends when all the wine is either drunk or poured on someone.

Logrono also has a somewhat more civilised harvest festival in September. The whole city eats outside with huge marquees set up to house the food and wine sellers. When I visited the festival, I loved how they dyed the water in the city’s fountains to a Rioja red.

Hotel Los Agustinos in Haro (hotellosagustinos.com; rooms from €102 in high season) has nice rooms in a beautiful ancient convent, while the Wine and Soul Suites has luxury suites in the centre of the town. The Eurostars Fuerte Ruavieja in Logrono (eurostarshotels.co.uk/eurostarts-fuerte-ruavieja; rooms from €150) has well-appointed rooms with a cool bar and restaurant. Hotel Calle Mayor (hotelcallemayor.com; rooms from €89) is in the city centre, with great decor.

The Alentejo region of Portugal is in the middle of the country, within a few hours’ drive of Faro or Lisbon, both served by direct flights on Ryanair or Aer Lingus. Evora and Beja are two of the main cities and both have a strong wine culture, dating back to Roman times. Both cities are ancient with several antiquities to visit but for me Evora is a more charming place to stay. The centre is enclosed by old city walls and boasts a Roman temple, a 500-year-old university and a chapel made from human bones.

Evora has a wine tourism centre, Rota dos Vinhos, where you can taste wines from Alentejo and get information on visiting the local herdade (roughly translated as a farm or rural property). The town of Monsaraz, about 55km from Evora, is a good place to start your wine tour. Herdade do Esporao is a well-known wine producer offering a range of activities, from tastings and courses to boat tours of the estate. Other producers in the area include Adega de Jose de Sousa and Carmim, a local producer co-op. If you tire of tasting, the hilltop village of Monsaraz is worth visiting for its ancient fortress and views over the Alentejo region.

The Noble House (thenoblehouse.pt; rooms from €89) is a charming hotel in a renovated old hotel in Evora, while the Convento do Evora (pousadasofportugal.com/pousadas/evora; rooms from €152) is a beautiful historic hotel in the city centre with a small pool.

As an alternative to basing your trip in Evora, you can stay on a vineyard and visit other places from there. Herdade da Malhadinha Nova (malhadinhanova.pt; rooms from €250) is a stunning small hotel situated on a vineyard about halfway between Evora and the Algarve. Its highly-regarded wines are named after the children of the family, and the gourmet restaurant is in the cellar building. Much of the food served, such as the traditional black pork, is produced on-site and you can tour the estate in a jeep to see the pigs grazing among the vines.

Meet the Bearman of Buncrana: ‘I knew about Joe Exotic for years’
8