Loretta’s, Phibsborough: Dublin’s coolest neighbourhood gets a slice of Americana 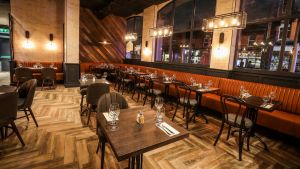 She scrubs up well, Phibsborough, and Loretta’s is the newest shiny brooch on her lapel. The north Dublin district still has a tilt to its chin after being named as one of the 50 coolest neighbourhoods in the world in a Time Out list in September. The news was greeted with equal amounts bemusement and told-ya-so glow that a Cinderella quarter was finally getting the recognition she deserved. Just avert your gaze from the hideousness of Phibsborough tower.

Loretta’s is on the busy corner of Phibsborough Road and the North Circular Road, or the North Circular Wind Tunnel as we’ll grow to think of it, as it channels a crisp draught through the bits of the building that haven’t been sealed up tight yet.

It’s a former bank on the corner, all granite pillars and big windows that once were hung with signs offering home loans and credit cards. The formality of the bank has been replaced with the down home decor of wood panelling, American home den style and a herringbone floor.

Superpub or burger joint would have been the accountants’ recommendation for a room as big as this. But instead they’ve let feelings and memories dictate the menu

Unusually for this kind of brown and tan decor the lighting is bright. I am becoming the Goldilocks of restaurant lighting. Too dark and you need a head torch and a watchmaker’s eye glass to read the menu. Too bright and you lose the cosy feel of limpid marmalade coloured light. Loretta’s is definitely on the brighter side of the spectrum.

My friend Gerry is impressed. He’s installed near the kitchen on a long banquette when I get blown in out of the dank dark night. They’ve done a brave thing with this great space. Superpub or burger joint would have been the accountants’ recommendation for a room as big as this. But instead they’ve let feelings and memories dictate the menu.

Loretta’s is the work of American chef Jimmy Wiley and is named after his aunt. It’s full of that rare thing in the cut-and-paste midrange restaurant sector: personality. More dinner than diner, Loretta’s is the work of someone who’s cooking his favourite dishes from the heart; big gutsy plates of Americana with all the Italian, French and southern influences that make up what we think of as food from the other side of the pond.

“Great space,” a friend text a few days earlier. “You must warn me when that review is for so I can be sure to go before everyone else.”

There’s an almost pink chicken-liver mousse piped on to small doorsteps of soft brioche and sprinkled with candied walnuts and golden raisins macerated in white port. We’re on the sweet savoury sweet riff that’s a couple of steps down from marshmallows on the yams but it works really well. I have the oyster mushrooms on toast, which are great, flecked with parsley and piled in a generous mound with lines of Parmesan fondue squeezed over it before it arrives. There are chunks of aubergine relish under all those mushrooms which have a lovely chutney tang. I’d have gone heavier on the relish but that’s the only quibble.

The American biscuit is to Irish eyes something we would only ever call a scone. Here it’s a buttermilk version, crumbly and freshly, made with a melting centre of honey jalapeno butter. I predict this biscuit served with Loretta’s fried chicken and a corn and fennel salad will never leave the menu, or if it does it will have to be given a guard of honour and carried out in a box. It’s a keeper; chicken breasts are flattened into escalopes, battered in a lightly spiced coating and fried. The corn and fennel salad is a great lemony finish to the dish. Combining chicken and salad under the lid of the honey-jalapeno buttered scone makes for a truly satisfying mouthful.

Gerry’s sea trout is described as cured on the menu, and then fried in a thick juicy fillet dotted with olives and pillowy butternut squash gnocchi which makes for a rib-sticking finish. By the end of the meal it’s clear they’re still putting things together. “I am the dessert menu,” our lovely server says before reciting a list of desserts that make it sound like all the thinking went into the savoury option. A brownie and banana split are fine. The split is served with so much ice cream, piped cream and squeezy bottled chocolate sauce that it’s a struggle to find the actual piece of fruit hidden underneath. My kids would love it.

When we mention the force five draught whistling in from the North Circular we’re told it’s on the list of jobs to be attacked with a sealing gun the following day.

Loretta’s is a space that will draw a crowd and feel more settled into itself, not to mention warmer, when it does. It’s a place to sit back and look out the big windows at the passing traffic and enjoy a district reinventing itself through small businesses wearing their hearts on their sleeves.

Dinner for two with sparkling water came to €85.50