Dublin 3rd most friendly city in the world

Conde Naste have voted Dublin and Galway in the top ten most friendly cities, but who else made the list? 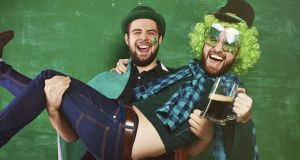 Charleston, South Carolina was declared to be the friendliest place in the world while Sydney finished in second spot just ahead of dear old Dublin

In Ireland we like nothing better than being told how friendly we are.

It doesn’t matter how many times we see smacked out skobies thieving mobile phones on Dublin’s mean streets or watch ridiculous drunken brawls break out over late-night coleslaw chips in Galway’s Eyre Square, if Conde Nast Traveler tells us we’re friendly than we must be friendly.

Once again, the readers of that most celebrated of glossy travel magazines has handed goings of friendliness to Dublin and Galway with the capital finishing in third place and Galway ending up in sixth position.

Clearly, there was some class of typographical error when the magazine was putting the final touches to its list as it seems unlikely that anyone anywhere in the world – apart, perhaps from Hill 16 on certain summer Sundays could think Galway was less friendly that than Dublin but apart from that the list rocks.

All told, over 100,000 of its readers took part in the travel magazine’s survey of cities, hotels, resorts, islands, airlines and, for the fourth year in a row, they were all given the chance to vote on the world’s friendliest cities.

Charleston, South Carolina was declared to be the friendliest place in the world while Sydney finished in second spot just ahead of dear old Dublin.

The top five positions were rounded out by Queenstown n New Zealand and Park City, Utah after which came Galway.

The rest of the top 10 was filled out by Savannah, Krakow, Bruges and Nashville

“Just look at this city—it’s hard not to be charmed,” the people at Conde Naste Traveller said about Galway. It enchanted readers with the “live music in the pubs and in the street, the food”.

Then there was “the vibe”.

When asked why he was voting for Galway one reader shouted that the “THESE ARE THE FRIENDLIEST PEOPLE I HAVE EVER MET.”

Some of the readers’ comments about Dublin, meanwhile, would cause some hearts to glow and more eyebrows to raise. “The people make the place” here, with “pubs and restaurants filled with locals and tourists alike, coming together to celebrate life”.

Another person said they had “never been somewhere with friendlier drinkers” while another contributor said the Irish “are so much fun,” and “there’s always a smiling face to talk to.”

The praise went on and on “We had best recommendations on where to go and what to see from the locals… better than any guide book,” someone else said.

Then there was the person –possibly the same chap who couldn’t turn the caps lock off his keyboard when he was raving about Galway – who said: simply – and once again very shoutily: “LOVE EVERYTHING ABOUT IRELAND. THE PEOPLE ARE THE NICEST IN THE WORLD.”

Spare a thought for poor Newark New Jersey which was voted the least friendly city in the world, just beating off Tijuana in Mexico and California’s Oakland for the dubious accolade.

“This was one of the saddest looking cities I’ve ever seen,” said one reader.