Checking in bags to Spain on Aer Lingus? That’ll be €280 for the family 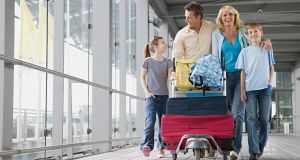 A family of four who have checked in a 15kg bag each will have to pay €280 to Spain or Italy, on top of their flights. Photograph: Getty

Aer Lingus has defended its decision to increase the cost of checking in a bag on flights to and from Spain, Italy and Greece by €10 just four months after it imposed a price increase of the same size.

The cost of checking in a bag on some Aer Lingus flights across Europe is climbing to €35 each way. The cost was €15 last October but in November the airline announced a €10 price hike and has now added a second increase which means the cost of checking in bags with on some routes has climbed by 133 per cent since the autumn.

A family of four travelling to Spain or Italy who have checked in just one 15kg bag each will now have to spend €280 on a return journey on top of the cost of the flights compared to a cost of just €120 this time last year.

A spokeswoman confirmed the price increase but said it was only part of the picture and some of the changes it has rolled out this week will see charges fall for the majority of its passengers.

Under the old system there were two route categories - near and far with different rates applying to each. Now there will be a three tier charging system.

Over 30 destinations qualify as ‘near’ including all UK destinations, Paris, Brussels and Amsterdam. “Guests travelling on these routes total nearly six million annually and make up over 58 per cent of our short haul guests total. These ‘near’ guests will pay just €15 for 15kg bag. Guests travelling on ‘mid’ routes to the likes of Alicante, Lisbon, Rome etc. will be charged a higher fee or €35 for 15kg bag. Equally those travelling further afield to ‘far’ destinations such as Corfu, Pula, Lanzarote will pay €50 for 15kg.”