At peace in a sacred temple in Laos

Travel Writer: Sam McGrath was spellbound by the hypnotic chants of the monks at the Wat Xieng Thong temple 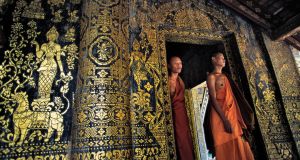 I was sitting cross-legged on the floor of Wat Xieng Thong Ratsavoravihanh, on the banks of the Mekong River in Luang Prabang, entirely alone, when the young monks entered. Their saffron robes, tied at the waist with bright yellow sashes, open at the shoulder, seemed to bring new light to the shadowy interior of the temple.

And yet, as had happened many times in Laos, where my meagre backpacker’s budget made me a wealthy man and my red hair immediately marked me as a foreigner, I could not help but feel like an interloper, a voyeuristic intruder in a foreign house of worship. The calm that had filled me as I admired the beautiful candle-lit altar, with its troop of seated Buddhas and fuchsia flowers, gave way to a feeling of deep discomfort.

As I hesitated, hoping to slip away before anyone took notice of me, two of the monks lifted enormous wooden mallets, painted the same shade of orange as their robes, and began to hammer alternately on a huge black, intricately-inlaid gong.

One monk hit the gong in its centre, filling the hall with a deep, undulating thrum. Between his blows, the second monk hammered along the edges, producing a hollow ringing like that of a small copper bell. They swung their mallets ever more rapidly, building to where the two sounds fused into a single hypnotic, harmonic note.

I could not move.

This final note hung in the air, echoing among the shadows of the high vaulted ceiling, as the monks settled themselves on the floor. Standing, backlit by the flickering altar, aligned with the central silver Buddha, an especially small monk, just a boy really, began to chant. The other monks joined in, their voices rising as one.

What am I doing here in Laos, alone?

What is the point of this endless, itinerant travel?

What was I searching for when I first set out?

I had finally decided to slip out the door, when an old stray dog, a dirty white plastic cone around its head, the lines of its ribs visible through its flesh, padded in, tongue lolling. Its soft steps muffled by the thin red-and-green carpet, the dog settled itself nearby and fixed its gaze directly on me.

It is hard for me to describe the mix of emotions that took hold of me. Somehow that dog’s steady stare seemed to release me from the doubts that had plagued me since arriving in Laos. I cannot fully express why, but the answers I had been looking for seemed to float there in the old stray’s cloudy, unquestioning eyes.

I refolded my legs beneath me, straightened my spine, and filled my lungs with the warm, damp temple air, rich with incense. As I released the breath, engulfed in the rhythmic, inscrutable chanting, I knew why I came to southeast Asia and what I was searching for: peace.