2022 take off may feature planes with gym, bar, creche and sleeping area facilities 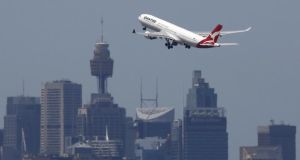 Alan Joyce, Qantas CEO: ’We’re now comfortable that we think we have vehicles that could do it’ Photograph: Jason Reed/Reuters

Airlines’ goal of a non-stop flight from Sydney to London took a leap forward this week as the world’s top aircraft-makers convinced Qantas Airways Ltd they can make the 20-hour route a reality.

This week Qantas CEO Alan Joyce said “We’re now comfortable that we think we have vehicles that could do it.”

The possibility of eliminating unwanted stopovers in countries with questionable human rights might be appealing. But would passengers be able for 20 hours on a plane?

A year ago Joyce publicly challenged Boeing and Airbus to design a plane capable of making a viable direct flight from Sydney to London or New York, and this week he said the manufacturers have succeeded.

Qantas call it Project Sunrise, involving configuring an aircraft to fly about 300 passengers and their luggage further than any regular service to date, with fuel on board for unexpected headwinds and emergencies.

Following the first non-stop, 9,000-mile, 17-hour flight from Perth to London in March this year, maybe it’s not such a stretch to imagine.

The first Qantas Airways service on a Boeing 787-9 Dreamliner aircraft from Perth in Western Australia to Heathrow took off on a Saturday evening this year and landed in London the following day. It was the first direct passenger service between the continents.

The London-Perth flight was 17 hours, about three hours shorter than routes stopping in the Middle East for refuelling or a change of plane.

It’s quite a contrast with the “kangaroo route” as the earliest Qantas flights between Australia and the UK were known, which took four days and seven stops.

Qantas’s Alan Joyce called it a “game-changing route” at the time, and “the antidote to the tyranny of distance and a revolution for air travel in Australia”.

Afterwards passengers were reported as saying it removed the “drudgery” of changing planes and disturbing sleep, and that it was very comfortable. Another regular traveller commented the trip “flew by”, and that “It was amazing, the best flight we ever had, we feel fresh as daisies.”

If the first routes to Australia’s east coast prove viable in 2022, direct connections from major cities in the Americas, Europe and Africa to Australia could follow the Sydney flight.

But how comfortable would it be, spending 20 hours on a plane?

Qantas and the manufacturers are dreaming up cabin interiors geared toward surviving such marathon flights. There’s scope to incorporate bunks, child-care facilities and even somewhere to work out, Joyce said.

“We’re challenging ourselves to think outside the box,” he said. “Would you have the space used for other activities – exercise, bar, creche, sleeping areas and berths? Boeing and Airbus have been actually quite creative in coming up with ideas.”

Qantas is sizing up the long-range Airbus A350 against Boeing’s 777X and executives from both manufacturers flew to Sydney to make presentations. Joyce plans to place an order next year and says neither supplier has its nose in front. Competition for the contract could help Qantas get the design and price it wants.

But 20-hour flights are a reality. In April this year Singapore Airlines had test flights for a 20-hour New York to Singapore route (it discontinued the “world’s longest flight” in 2013 but plans to relaunch by the end of this year), Conde Nast Traveller (CNT) reported.

CNT’s editorial team weighed up what the experience may be like, compared to shorter flights and a stopover: “20 hours squished like a sausage in coach may be too much to handle, regardless of the latest air circulation technology”.

One of the team said the Newark-Singapore direct route on Singapore Air “wasn’t just endurable – it was enjoyable. And I was in economy! It’s an uninterrupted day of someone else taking care of you, like a spa in the sky,” with an oversized seat hot towel on arrival, decent meals and entertainment.

Another Conde Nast writer said the Airbus A350 and Boeing 787 Dreamliner tech is superior (cabin pressure, humidification, LED lighting and air circulation) so “you’ll emerge from that 20-hour trip feeling better than you would after a 14-hour trip on a different plane, guaranteed – no matter how good the layover”. But others “get antsy at the five-hour mark” or would lose their mind without a stopover. – Additional reporting: Bloomberg

Last couple in paradise: The Covid-19 honeymooners stranded in the Maldives
3

Coronavirus and Cystic Fibrosis: ‘It’s hard not to be nervous about it’
Real news has value SUBSCRIBE