Autism spectrum: how to catch a child’s imagination 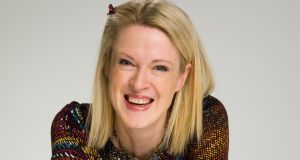 Yellow stars dangled on strings from the ceiling and at least a dozen squishy cushions lay scattered on the floor as teacher Deirdre Sullivan hitched up a length of sunshine-coloured fabric across a ceiling-to-floor window in the new dlr Lexicon overlooking Dún Laoghaire harbour.

She and writer Sarah Webb, the family and schools curator of the Mountains to Sea dlr Book Festival, were finalising the transformation of the room for an innovative series of workshops designed for children on the autism spectrum: a multisensory reading of Oliver Jeffers’s picture book How to Catch a Star.

Sounds of the seashore played on a continuous loop; basins of sand, water and “sea foam” were lined up on a table and the pièce de resistance was real live starfish in the corner, courtesy of SeaLife in Bray.

Sullivan, who teaches children on the autism spectrum, knew that she would have to tailor every reading to each child booked in for the individual workshops that ran on the Saturday of the festival in March.

“They are all so different and they all have different sensory needs,” she told The Irish Times beforehand. “Some might just want to hide under the blanket, and that’s cool too.”

But her first customer of the day was a very articulate seven-year-old, well versed in the ways of the universe. As Sullivan recounted the storybook boy’s endeavours to capture a star, Ben from Co Dublin was able to tell her that stars are not included in the solar system; that they’re as big as the sun and that the boy couldn’t jump high enough to reach one “because of gravity”. A generous sprinkling of “wow”s from Ben showed what he was getting out of the session and his father sitting in the corner was impressed too.

“After months of careful research and planning, the workshops went brilliantly and the positive feedback we received from the parents was heartening,” says Webb, who dreamed up the idea.

As a festival programmer, she aims to “provide excellent, unforgettable events and workshops for all children and families”, she says. “And as the parent of a child on the autistic spectrum I’m acutely aware that there are very few, if any, festival events I can bring my own son to, and children on the spectrum need events tailored to their needs.”

She hopes other festivals will follow their lead and suggests the Arts Council might consider offering training. “If it wasn’t for my personal experience, I’m not sure as an arts programmer I’d know where to start.”

By 2017, she would “love to see an autism-friendly event or workshop at every festival in Ireland”.

Meanwhile, up to 100 children on the autism spectrum were able to enjoy AfriKaa at the National Concert Hall in Dublin last weekend. Staged in the John Field Room, it is a multi-sensory sound installation devised by artist Slavek Kwi and based on sound recordings he made in the African bush. There’s a tent area and tactile, vibrating plates on which children can lie. “It creates a very stimulating but non-threatening environment for the children,” says Nigel Flegg, the NCH’s head of education, community and outreach. “They are free to do whatever they want. They can draw, they can colour, they can run around, they can lie on the plates, they can watch the video.” A couple of musicians wander through the room and play as kids respond.

The twice-yearly “AfriKaa”, and its predecessor “Ama-Zone”, arose from the NCH’s support of Kwi’s work in St Declan’s Special School in Ballsbridge, with “outreach” becoming “inreach”.

A lot of children with special needs don’t get the opportunity to go to the NCH or other cultural institutions, says Flegg. Now the NCH is developing a broader programme of activities across a variety of special needs.

Various cinemas run autism-friendly screenings. The Odeon chain, the Vue cinema and Cineworld in Dublin are among those that hold them every month and a spokesman for the Omniplex chain says some of its cinemas also do them regularly but it would be happy to accommodate more if contacted by local groups.