One Change: The impact of tiny plastics on human health is still unknown 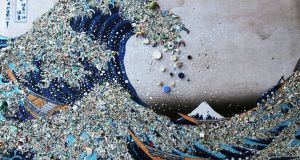 The Great Wave by the Japanese artist Hokusai is just about everywhere these days – printed on tablecloths to notebooks and even dresses, while there’s versions of it with McDonald’s packaging swirling around the spray, as the Cookie Monster, and as part of Banksy’s street art. Most cannily, perhaps, is a rendering by activist and artist Bonnie Monteleone of the Plastic Ocean Project which shows mountains of rubbish being churned up by the towering blue water. It echoes the reality, of course, on many shorelines across the world where photos have emerged of harbours and beaches drenched in plastic containers, bottles and wrappers.

In the Ganges river in India and Bangladesh, for example, an estimated 544,000 tonnes of plastic are dumped each year. As one of the worst waterways in terms of the plastic pollution carried into the ocean, researchers found that a single plastic bottle in the Ganges can travel about 1km a day. They also discovered that, on average, plastic bottles dumped into rivers can travel up to 3,000km in just a few months.

All of which puts the term “throwaway” into a different light. A recent Greenpeace video campaign, which estimated that only 9 per cent of plastic has been recycled globally, had the catchline: “There is no ‘away’.” Everything that we use has to go somewhere, be reused or recycled, or else it will come back to us in the water, on beaches or in the air.

The battle against plastic often focuses on the bigger, more obvious stuff that we can see, but 2021 is set to be a particularly interesting one in terms of research into nano and microplastics. Over the past number of years the presence of these tiny plastics has become increasingly widespread: research has shown they exist in most water sources, in the air, and they have been traced in some foodstuffs. In October last year it was revealed that babies fed bottled formula could be swallowing millions of plastic particles a day. In December a story emerged about microplastics being found in the placentas of unborn babies. The big question that has loomed over all these discoveries, however, is how harmful are they to human health?

With air pollution, the smaller particles proved more dangerous because of their ability to be absorbed into the human cell; whether the same will be found of microplastics it’s too early to say but there are various studies nearing conclusion, many that are funded by the European Commission. It’s a story I’ll be keeping a close eye on. @SorchaHamilton