John Wilson: Roosters and 11 botanicals give this potato gin its texture and soft flavour 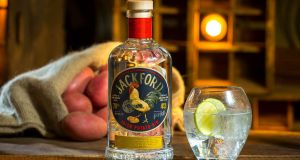 The Stafford family have been farming in Co Wexford for 300 years. Shoppers will be familiar with the name Slaney Farms for both potatoes and strawberries.

“The idea for a gin first came three years ago,” John Stafford says. “Our day job is growing potatoes, so we looked at other ways we could use them. We settled on potato gin. It is quite unique.”

Their Jackford gin is nothing like poitín and doesn’t taste of potatoes, but it does have a very different and attractive texture and soft flavour. “We had a tasting panel of 10 people tasting away for three months, and ended up with 11 botanicals.” These include juniper, liquorice root, angelica, black peppercorns, orris root, cassia, bitter orange, strawberry, gooseberry, rosemary and basil. The potatoes used are Roosters, hence the cockerel on the label.

So far it has been going well. “We launched two years ago and there was a lot of competition, but we had got into SuperValu, some specialist spirit shops like Celtic Whiskey, and airports, including Dubai. Obviously, everything was thrown into confusion this year. We are waiting to see what will happen next year. It is a premium gin; we put a lot of effort into the bottle and the gin,” Stafford says.

Jackford has won quite a few awards, including gold and silver at the prestigious International Wine and Spirit Competition, as well as being a gold medal winner at the Irish Whiskey Awards in 2018. “I think the tonic that you use makes a huge difference. We’ve worked with Poachers [another local product] and our drinks go very well together.”

Jackford gin has a different mouthfeel to most gins: it is smooth, almost creamy, with plenty of juniper, a lovely fruitiness, and attractive, earthy base notes. I tried it with a Poachers tonic and, as Stafford says, the two work very well together. It also works well served neat with ice, highlighting the creamy texture. Jackford is available for €45 at most SuperValu shops, Celtic Whiskey and other spirit specialists.