Paul Flynn: Perk up your taste buds and rein in the calories at the same time 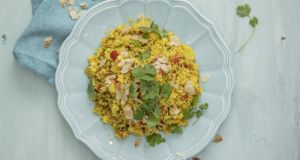 Most of us will be feeling a bit more luxuriant after Christmas. In my case, the clothes have tightened like an inquisitor’s vice. But I’m sad that Christmas is over, I love it. January is so flat and dark, it can be hard to do anything else but hunker down. My cooking changes, less so in the restaurant than at home, where the resolutions are ganging up on me.

We normally have our annual holidays in January. Restaurateurs used to populate the airports like migrating geese. . . not so much anymore. Far Flung Flynn is my alter ego. That fella gets around. He’s a diva, a two-legged version of Condé Nast Traveller who will only stay in exotic, Instagramable dreamscapes. Backpacking is for the great unwashed. Far Flung Flynn wouldn’t be caught dead in a hostel lest his reputation and expectations be tarnished. These days, I can only dream.

My dishes this week represent the need to perk up my taste buds and rein in the calories. They are also a flight of fancy where I swoop and delve into the cooking of different countries. Their food somehow brings me closer to them. Thankfully, there is hope on the horizon that we will travel again.

I love pilaffs. This one resonates of gentle spice, contented restraint and humility. I would have this with shop-bought hummus, mango chutney and warmed naan bread and eat it by the fire. This would also be a magnificent accompaniment to roast lamb or chicken.

I’m a fan of sea trout but use salmon if you can’t find it. This is a one-pan wonder that I cooked at home one night and ate with steamed rice. The soy, ginger and garlic permeate the trout and the cabbage gives it a healthy satisfying crunch.

I’m trying to eat less meat. It just seems the right thing to do. Don’t panic, meat-eaters, inside me lurks the soul of a savage. It won’t be long until I’m craving something slow-cooked, dark and wobbly.

For now though, I’m starting off the year with cauliflower and good intentions, but you know what they say about those.

2 Put the oil and butter into a pot. Add the onion, then cook over a gentle heat for five minutes until the onion starts to soften.

3 Add the garam masala and cook for a little longer, then add the lentils, raisins, rice, bay leaves and orange.

4 Turn everything around in the pot, then add the stock. Season and bring to a simmer.

5 Cover the pot and put in the oven for 20 minutes.

6 Remove from the oven and fluff up the rice with a fork.

1 Layer the cabbage, cauliflower and sea trout on a large frying pan or shallow pot.

2 Scatter the ginger and garlic over the trout then drizzle over the soy sauce, fish sauce, honey and sesame oil.

3 Add the water and season using just a little salt and lots of black pepper.

4 Cover the pan tightly then cook on the hob on the highest heat for 10-12 minutes. Exactly how long it takes will entirely depend on the thickness of the fish.

5 Use a knife to check if the fish is cooked after 10 minutes.

6 The sauce should be nearly all absorbed into the vegetables.

7 If you find that your fish isn’t cooked and your pan is dry just add a little more water and continue to cook for another minute or two.

1 Pour the water over the couscous then cover with cling film and let it sit for 10 minutes.

2 Fork the couscous through so there are no lumps remaining.

3 Put the olive oil into a wide, shallow pan or wok, then add the onion, garlic and pepper.

4 Cook for 15 minutes over a very gentle heat then add the cauliflower, ras el hanout and apricots.

5 Continue to cook for a further 15 minutes until everything starts to get sticky and begins to caramelise.

6 Add the zest and juice of the orange, followed by the couscous, almonds and coriander. Season well and fold together gently.

7 Serve straight away with some hummus or minted yoghurt.

8 You can make this in advance and warm it through in a microwave or it is delicious at room temperature too.