As one of the founders of the Blackrock Clinic, James Sheehan has a unique insight into Ireland’s health service 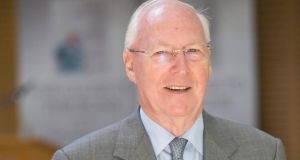 James Sheehan has occupied the same offices on the fifth floor of the Blackrock Clinic since it opened 30 years ago and it is easy to understand why.

From his vantage point he can see the boats coming into Dún Laoghaire harbour, the Poolbeg towers and as far north as the Hill of Howth.

The Dublin skyline has changed as much as Irish society has since the clinic opened in 1981, but its presence in the landscape of Irish health provision remains as dominant as ever.

The softly spoken Kerryman, now 74, has documented his life story in a glossy coffee table book entitled Life Close To The Bone, Musings Of An Orthopaedic Surgeon.

Observers of the Irish health system will find the chapters relating to his involvement in private medicine most interesting, but he also talks about hospital design, his philosophy on health and management and how facilities can be most cost-effectively managed.

“It’s musings, it is not a book on anything. I’m not a writer, I’m more into the action,” he says.

Health entrepreneur
Although he did invent an artificial knee – he also has a PhD in engineering – it is as a health entrepreneur that he is best known. He says the motivation behind the book is setting the record straight about why he set up the Blackrock Clinic.

The clinic was founded in 1981 at a time when thousands of beds were being taken out of the public system. It was a very big deal; the £910,000 paid for the five-acre site in Blackrock was a record for Dublin at the time.

The clinic was founded by Sheehan, his brother Joe, another orthopaedic surgeon, the late cardiologist Maurice Neligan and George Duffy, a nuclear medicine doctor.

It was set up to provide the 30 per cent of Irish people who then had private health insurance with a way of accessing efficient care, but he says the motivations were borne out of frustration with public health services, not a desire to reinforce the two-tier health system.

“I’m interested in a one-tier system that everybody can avail of it. Unfortunately, that is not the case.”

While some will find the admission surprising, Sheehan says equality of access is the single most important thing in medicine.

It is indisputable that the Blackrock Clinic, the Galway Clinic which was set up in 2004, and the Hermitage Clinic in 2007 have been successful, popular with patients and extremely profitable. However, they could also be seen as symbols of the repeated failure of the public health system to provide timely and cost-effective care for all its citizens.

Since the end of the National Treatment Purchase Fund (NTP), they are now solely available to private health insurance customers, reinforcing the two-tier health system in Ireland.

‘Independent’ facilities
Sheehan does not like the term “private medicine”, preferring the word “independent” to describe the facilities he is involved in.

“There’s nothing private about it. It is independent of State funding. This is where universal health insurance will allow people to pick the facility of their choice and the quality facilities will prosper. The poorer facilities won’t.

“That’s what an open market is all about. If you eliminate that element of competition, it is to the determinant of everyone.”

He cites Singapore as a shining example of a country where healthcare provision is well allocated, according to means. Everybody contributes something, he says, and because everybody pays, the health service is not abused. “It is an important principal going forward. Anything that is totally free is abused.”

He believes the long-running saga of the children’s hospital exemplifies how poor the public sector is at building medical facilities.

In 2005 he offered a site on the M50 for the new children’s hospital and promised to build it in three years, but was rebuffed. Instead, the Government has opted for the St James’s site.

“If you handed it over to the private sector, you could have a first-class hospital in two and a half to three years,” he says.

“The concept of putting it on top of an existing hospital without any space for expansion, or even cramped to start with, is absolute insanity to me.

“A country should really be proud of what it does for its children. The way they have handled the redevelopment of the children’s hospital is absolutely crazy.”

Despite his undeniable skill in getting major medical facilities up and running, he says he’s never been courted by Government for advice. “In 57 years I’ve never been once invited to give my opinion. They [the Government] do their own thing.”

The private sector is better at getting things done, at innovating, at cutting out stifling bureaucracy and being efficient, he says. “We know down to the last euro what a procedure costs. The public sector does not know.”

The Blackrock Clinic took 12 months to build; the Galway Clinic took 15 months from start to finish despite well documented difficulties which stopped the project at one stage.

The book features some of the chief luminaries of the Celtic Tiger such as Sean Mulryan and Bernard McNamara, the beef baron Larry Goodman, while Sheehan also recounts that without the support of Anglo Irish Bank, the Galway Clinic may never have been finished.

“We live in a socialised type of society where we knock people who try to do anything different. There is very little encouragement given,” he says.

“We’re really a Communist state now. We’re not far off what Russia was in its worst state. Everybody has to be pretty much brought down to the same level. It is not seen to be right that anybody has anything more than anyone else.

“Work isn’t encouraged. There’s a huge anti-work attitude. Our social welfare benefits for people who are not working are excessive so there is no incentive for people to return to work in a lot of incidences.

“I’m all for people being looked after by the State, but to have levels of subsidy for people who don’t work on a par with what they get if they are working is not sustainable.”

Sheehan retains a strong Catholic faith which is present in the ethos and architecture of the facilities he has been involved in.

“I prefer to refer to it as a Christian ethos. The principals of Christianity are propagating Christ’s message, looking after the sick and the needy. That, to me, is the whole essence of what healthcare is about. We’re there to help them in their hour of need.”

He responds: “To me the big failure of these facilities is that the Government have not funded enough people to use them. That’s why I would welcome the use of universal health insurance because that would allow people to avail of facilities if the need arises.

“We’re not a registered charity and we have to survive.”