St Mels has risen: people clapped in the streets when the bells rang out again

Five years after it was virtually destroyed by fire, St Mel’s Cathedral in Longford has risen from the ashes, just in time for Christmas

Five years after it was virtually destroyed by a fire, St Mel’s Cathedral in Longford has risen from the ashes, just in time for Christmas. Video: Bryan O'Brien 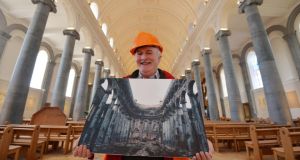 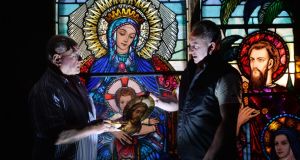 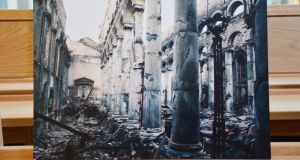 A photographs of the cathedral’s interiors after the fire 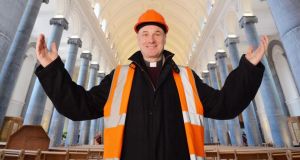 ‘Tempers are getting frayed” smiles Fr Tom Healy, the administrator of St Mels Cathedral in Longford, and that could be putting it mildly. The countdown is on to Christmas Eve, when midnight mass will be televised live across Europe from the neo-classical cathedral – five years after it virtually burned to the ground. Following a €30m restoration one of the biggest ecclesiastical projects in Europe is nearly complete and planning to open its doors to the public in a week’s time.

Fr Healy’s air of equanimity in the midst of impending deadlines, is beatific. He came to Longford 27 years ago at the age of 26 never realising the daunting task he would have to face while still attending to everyday pastoral work. “I have learnt what passion, drive and cooperation can do”, he confesses in the presbytery. “We (St Mel’s Cathedral Project Committee) have achieved more than we thought we could – there were long, hard 3-4 hour meetings, we had rows, snags and problems, but we are now on the verge of opening and I hope it will recreate civic pride in Longford .”

Outside the cathedral, one of the most visible ecclesiastic buildings in Ireland, workers are busy on muddy sites building walls, laying paths and pedestrian routes as the church bells ring out every 15 minutes. “When the bells came back six months ago, it was a very emotional thing. People clapped in the streets. . . there was a nice comforting feel about it,” says Fr Healy gazing up at the massive, 200ft high bell tower.

Inside, the new €600,000 36-stop pipe organ from Italy has been installed in the transept and each of its 2,307 pipes are being “voiced” by its maker Francesco Ruffatti from Padua, one of the most celebrated organ makers in the world. Voicing, he explains, involves making every single pipe produce the right sound. He will stay until Christmas.

“I think this cathedral is amazing”, says the well travelled maestro who once lived in a tree house in the Amazon. “It feels like a modern building and because of natural materials like stone and marble its acoustics are very favourable to sound – it would be fantastic for concerts.” The organ is made from African mahogany, the pipes from lead and Malaysian tin and the leather organically cured “in the old way” in southern Italy. He has built 50 in the US most recently one for the Symphony Hall in San Francisco.

The interior of the cathedral is breathtaking. Its pristine appearance and ethereal feeling of lightness and airiness looks modern and fresh thanks to the magnificent white plasterwork in the wide spans of the vaulted ceiling, the stained glass, the polished lime stone flooring and the dramatic colonnades of blue limestone forming the nave.

The biggest building challenge after the fire was replacing the columns, the architectural glories of the cathedral. According to conservation specialist Peter Cox, the original stone quarried from Newtown Cashel in Co Longford was cut vertically rather than horizontally so that in the intensive 1,000 degree heat of the fire, they “laminated” or shattered.

For the new columns more than 10,000 tons of limestone were quarried at a cost of more than €2½ million. “It nearly broke the quarry in Leighlin getting the right stone”, says chief architect Colm Redmond. “For every ton of stone quarried, 80 per cent was not usable because of fossils or calcite veins. The scrolls at the top were particularly difficult. We had one mason sculptor in Kilkenny and another in Clare producing one a month.”

Redmond also has a diploma in theology and explains how the cathedral came to be built in the wake of Catholic Emancipation through the vision of the then Bishop William O’Higgins. “He was a local and very bright, educated in hedge schools and was brought to Paris during the 100 day war and exposed to nationalism. He was very much a European, a professor of theology in the Irish College in Rome, later going to Vienna before being called back to Maynooth. He didn’t choose the style then in vogue in the UK for the cathedral, but in Europe so the architectural references are Paris and Rome. He was asserting a national identity in the heartland of midlands Ireland.” St Mels is thus architecturally of international importance.

Originally the building, which started in 1840, would have cost around £50,000 and was to be “the finest church that ever existed” according to Bishop O’Higgins in his letter to the pope asking him if he could procure indulgences for contributors. Fr Tom Murray, the Longford historian, reckons the final cost would have been about £100,000, the money collected from England, Canada and America. It would cost €100 million to build today.

In the flurry of activity, I meet Margret Glupker armed with a clipboard who is “snagging”. This, explains the German architect, means going around looking for things that need to be corrected. Overhead, the sun is illuminating the stained glass windows – the restored Harry Clarke studio panels, their deep colours inspiring the work of James Scanlon’s western clerestory windows while the art glass by a Paris based Dominican priest works with the dawn light.

“There are two stories here”, says Redmond. “One is the putting back together of a building badly hurt. Secondly, the brief is to put forward a cathedral for the 21st century. So what you see is the striking of a balance between holding on to the past but looking forward to the future.”

Final preparations are falling into place. Four statues – including one of St Mel (which miraculously survived the fire) are awaiting installation over the altar. The seating from Dromod is in place. The four confessionals have been completed. The Carrara marble altar, all 7½ tons of it from the same quarry as Michaelangelo’s statue of David in Florence, is in situ as is the baptismal font on its “waters of life” mosaic. 10 of the 14 Stations of the Cross have been hung.

“We don’t have a lot in Longford to be proud of, but we had this and it was a massive blow”, recalls photographer Tiernan Dolan who has chronicled the restoration in some 25,000 photographs.. “We lost our army barracks at the beginning of 2009 and then the fire at the end of the year was like being kicked in the teeth. People outside Longford don’t realise how important it was to the people of Longford. Now we are getting 20,000 Facebook hits a month on our website from places as far away as Iran, Iraq, China, Russia, Qatar, Brazil and everywhere else. People are saying they want to come home”.

In the meantime, Fr Healy has to organise five Christmas Day masses, readings, prayers, commentaries, processions, music, servers, minister, ushers and more. Pope Benedict has sent him a set of vestments and a chalice and if there are still more ends to tidy up for the final completion, he has, he says, “a honeymoon” period before the formal dedication on May 17th next. Are fire regulations in place too? “Oh, God, yes” he replies.