‘You’ve made your bed’: life as a single mother

It might be outdated to call me a fallen woman, but there are subtler ways of condemning me for being a single woman who got pregnant unplanned 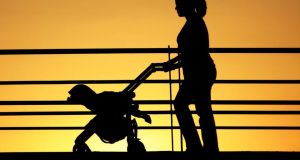 When I read Tara Flynn’s article in The Irish Times last year about her experience of having an abortion in 2006, I felt compelled to write about my experience from the other side of that kind of story.

In 2003, aged 36, I found myself in a similar situation, unexpectedly pregnant. The relationship had ended before I discovered I was pregnant. The father was adamant that I have an abortion. I was in a good, permanent job, which I greatly enjoyed. Having an abortion made sense.

I chose to keep her.

My experience has more in common with Flynn’s than you might think, at least in terms of people’s reactions. Like her, my choice was applauded by some and derided by others. Some said my choice meant sabotaging my future prospects. One friend – who had by that time had two abortions – sent me an email saying that I was “digging my own grave”. We lost touch.

Two years ago, as I faced homelessness, my aunt, a woman I had once marvelled at for having condoms in her bathroom for her teenage children, asked me caustically had I never heard of birth control.

Comments that I have “made my own bed” circulate in close circles. So do comments that I do not deserve any help when others – a reference to married couples – work so hard for their lifestyles. It might be outdated to call me a “fallen” woman, but there are other, more subtle ways of condemning me for being a single woman who got pregnant, unplanned.

Like so many parents, I loved my baby even before she was born. The day I gave birth I waited until daylight before making the first phone call, to a family member. The terse response to my news was that I had woken her. She mumbled a hasty congratulations and said I was to call back later. That was a lonely moment. I knew that had I called with a husband beside me, whatever the time of day or night, I would not have received such a reply.

I know other single women who feel the same: that somehow, without another half, you are treated as a lesser person. Things are said to you that you know would not be said if those words were to be held accountable to another. You are an easy target. Not always, but there are those few.

My choice led to unemployment and near homelessness. By 2005 I could no longer cope with a demanding full-time job and a baby who slept only a few sporadic hours at night. This continued until she was almost three. Then there was the childminder who told me that we should discipline my eight-month-old baby because she had developed a scream. I was physically and mentally stretched to breaking point.

My requests to have my working hours changed were refused. I was given an all- or-nothing choice. I chose all that mattered: my health and my baby’s wellbeing. I lost my job and my home, which came with the job. Again, responses to my choice among my close circle of family and friends were mixed.

I have never, for one moment, regretted my decision, either to have my baby or to leave my job. The alternatives were simply anathema to self-preservation. Like Tara Flynn, had I not made the choices that my instinct was guiding me towards, I might not be here, at least not intact.

Had I not become a single mother, I would certainly have a good job, would probably own a house and might be married. If I was told back then that I would lose all these things by keeping this child, my choice would have been no different.

While it was hardly my plan to live without these things, I could not, above all, have lived without my personal integrity.

Unlike Flynn before she made her story public, my choice was no secret, so my situation was, and continues to be, wide open to gossip and judgment. At times I have felt obliged to explain the circumstances of my becoming pregnant, to somehow set the record straight that it wasn’t my fault, that I didn’t get pregnant to ensnare a man and that I had no choice but to leave my job before I became seriously ill.

A better tactic, in this instance and in life generally, is to avoid unhelpful, negative people who focus on the rights and wrongs rather than the present task, whether it be raising a child or coping with the decision and aftermath of an abortion.

Moral of the stories

The moral of both mine and Flynn’s stories, were this an Aesopian fable, might be “you’re damned if you do and you’re damned if you don’t”. Neither of us made the right choice, according to our critics. Logic might suggest that her critics are my admirers and vice versa. Opinion is not always so logical. Some will criticise both of us for finding ourselves in this situation.

This is where perhaps the real divide lies, between those who acknowledge the messiness of life and those who cannot. Unplanned pregnancies happen in all walks of life, both within and without marriage, to teenagers as well as women in their 40s.

Sometimes contraceptives, good sense or timing fail. Most of us who find ourselves in such a situation make the best choices possible. It is those of us living through the dilemma who know best which choice will be the least devastating for us.