‘You don’t retire from being a woman’

Ambassador Anne Anderson on her trailblazing career in male-dominated diplomacy 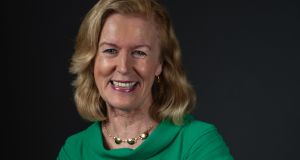 Anne Anderson, the outgoing Irish Ambassador to the United States: “I had to put my foot down, very early on.” Photograph: Andre Chung for The Washington Post via Getty Images

It’s mid-summer in Washington DC and Anne Anderson is taking a break from packing her papers and making some final calls as she prepares to leave the US capital. In the cool of the Irish Embassy, overlooking leafy Sheridan Circle, the outgoing Irish Ambassador to Washington is in reflective mood.

Her departure this summer is part of the regular rotation of Ireland’s diplomatic service – after four years in this post she will be replaced next month by Ireland’s Ambassador to Great Britain, Dan Mulhall. But for Anderson, who turns 65 this year, it also marks the end of a 45-year career at the Department of Foreign Affairs.

Anderson is something of a trailblazer for Irish feminism. The Tipperary native joined the Department of Foreign Affairs in 1972 after graduating from UCD with a degree in history and political science.

“Like many people of my generation, my father was encouraging me to pursue a permanent, pensionable Civil Service career, but I was worried it would be too narrow and I refused to do the application for administrative officer,” she says with a smile. “Then he came home one evening with an application form for third secretary at the Department of Foreign Affairs. I thought, this sounds different; this could offer adventure . . .”

On joining the department, Anderson moved swiftly up the ranks. In her early years in Dublin, Garret FitzGerald was minister for foreign affairs. “I was still very young but Garret FitzGerald was the kind of person who had no regard for hierarchy. He just wanted to engage with whoever was writing the briefs. It was exhilarating to have senior-level exposure at a very young age in the department. I embraced it.”

In 1976 she was sent on her first foreign posting, to Geneva. Anderson had joined the department at a time when it was expanding due to Ireland’s accession to the EEC, a development that also required Ireland to abolish the marriage ban that had obliged women to give up their jobs in the civil and public service on marriage.

A first of firsts

As a result, she became the first married woman to be posted abroad for the department. A battle over allowances and terms and conditions ensued.

I had to put my foot down, very early on

“I saw no issue. I was a married officer. But the Department of Finance took the view, because the regulations were drawn up at a time when married officer by definition meant ‘married man’, that I had no automatic right to the different allowances. I had to put my foot down, very early on,” she recalls.

Ultimately, the issue was resolved on the eve of her departure. But the experience was instructive. “I think that early exposure probably meant that a bit of steel entered my soul.”

As Anderson’s career progressed, she soon discovered this would be just one of many “firsts” in her life. In 1995 she became the first female Irish ambassador to the United Nations in Geneva – a period that coincided with Mary Robinson’s tenure as UN High Commissioner for Human Rights.

“I remember one meeting where we had three Irish women on the panel – Mary, myself as chair of the commission on human rights, and Liz O’Donnell, then minister of state representing the government,” she recalls with a smile. Mary Robinson is still a friend and the two met a few weeks ago in Washington.

As she chaired Ireland’s presidency of the EU in 2004, Anderson took her place alongside dozens of male ambassadors. One simple line in a Financial Times article captured the import of her appointment: “She made history by sitting down”.

While Anderson is keen to stress that she never experienced any discrimination from any of her fellow ambassadors during her posting in Brussels, but she does believe it was remarkable.

“It is simply a completely abnormal situation to have that kind of imbalance at a negotiating table. I don’t think it was just by coincidence that it happened. I think at some subliminal level, there was a sense that Brussels is where the heavy lifting is done. Brussels is a place where you’re often negotiating through the night to get outcomes, and at some subliminal level there was a sense this was a man’s job. I cannot believe it was purely a coincidence that you never had a woman at that inner table before.”

In 2009 she was posted to the UN in New York where she met her partner Frank, a New York surgeon, and in 2013 became Ambassador to Washington. She had previously spent four years in Washington in the 1980s where her daughter Claire was born.

Like the rest of the world, Anderson watched as Donald Trump’s improbable victory unfolded last November. On the Trump phenomenon she is diplomatically reticent, unwilling to be drawn on criticism of the president. “Obviously it is a new context, a new administration, but the tools of diplomacy remain the same, finding the points of connections, building relationships, identifying the commonality of interests for both countries,” she says, tactfully.

She disputes any suggestion that successive Irish governments and diplomats have cultivated Democrats at the expense of Republicans. “Having bipartisan support for our agenda here has always been central to our strategy.” she says, “Even before this election, we had a bedrock of solid relationships on the Hill on the Republican side.” She cites House Speaker Paul Ryan, and his deputy Kevin McCarthy, as well as budget director Mick Mulvaney, who she describes as a friend.

Numerous Republican senators as well as Democratic minority leader Nancy Pelosi attended Anderson’s farewell reception in Washington last month. She also cites economics and trade as one of the key priorities of the embassy in Washington, as well as the issue of immigration reform.

She does believe, however, that sexism played a role in last year’s presidential campaign. “Obviously there were a lot of factors at play, but when you look at the constant observations and criticisms about Hillary Clinton – what she was wearing, the pitch of her voice, did she smile enough. Those questions would not have arisen, certainly to the same degree, if one was commenting on a male candidate.”

“I often suggest a thought experiment,” she continues. “If you reverse the gender for the two candidates. If you gave them exactly the same history, temperament, mode of expression, set of opinions and you reversed simply their gender . . . well I think a lot of people wouldn’t need to think too long about that question.”

She has also been confronted with the conservatism of some sections of Irish-America. She has spoken before about the marginalisation of women from the story of Irish-America. Last year, she became the first woman to be admitted to the Philadelphia branch of the Friendly Sons of St Patrick, a 245-year-old, all-male, Irish-American society which hosts an annual St Patrick’s Day dinner.

To have major events where women have to stay outside the doors, it’s not how I see Ireland

She says it was an important moment: “Of all days, on these national days, to have major events where women have to stay outside the doors, it’s not how I see Ireland.” She adds that this modern vision of an inclusive, forward-looking Ireland was one that was promoted in the hundreds of 1916 commemoration events that took place across the US last year.

As she reflects on her career over four decades, Anderson is optimistic about how far women have come. But she still believes that there are problems in terms of female representation in politics.

“Nobody could be happy with the situation where you have 22 per cent female representation in the Dáil. The imperative is to increase that percentage. I think very dedicated and committed efforts are going to have to be required to accelerate change.”

She sees similar issues in other professions, including the diplomatic service.

“In the Department of Foreign Affairs at entry level we have about 55 per cent female, 45 per cent male intake, but at the very top levels, it’s about 20 per cent female. Obviously what people hope and believe is that time will look after the problem, that there is a pipeline there. But I have constantly made the point – you have to protect your pipelines, otherwise pipelines have a habit of developing leaks.”

Nonetheless, she is conscious about the progress that has been made. She recalls the experience of her mother.

“For my mother, there was the double burden of gender and social class. She was an extremely bright person but left school at about 15, worked as a clerk in the post office and had to resign because of marriage. But she had a very inquiring mind, a lively intelligence, a passion for literature and particularly poetry.

“I think there was a degree of frustration all her life that there were not better outlets for her talents. Things are radically different today in terms of educational opportunity. The change has been extraordinary.”

As she looks back at her career she cites her time at the UN in the field of human rights as one of the key challenges and achievements.