Hilary Fannin: The image of Alan Kurdi’s body, washed up on a Turkish beach in 2015, was, for many of the students, emblematic of their sense of powerlessness 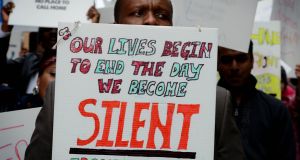 “When I was five years old, my mother told me that good things would come to good people. That was the first message in my life that had an impact on me. But when I saw the motionless body of an innocent infant lying on that beach, I knew that my mother’s ideology was no more than a fantasy. For weeks afterwards all I could do was think of the small things that boy would miss out on. I never thought the day would come where people would actually accept this travesty and move on, yet today even I, who cared so much for that child, struggle to remember his name.”

The name of that drowned three-year-old was Alan Kurdi and the above quote was the searingly honest response to his fate by one of the students involved in Eire: Land of a Hundred Thousand Welcomes, a recent short production devised by pupils at Mount Temple School in Dublin. Directed by their assiduous and dedicated English teacher, Laura Doak, and choreographed by Ciarán Gray, the piece was a sophisticated, layered piece of theatre, fuelled by the students’ raw anger and palpable disappointment at grown-up Irish society’s failure to do more about what is referred to, often over-fatalistically, as “the refugee crisis”.

I had been sitting in the drowsy heat of the Samuel Beckett Theatre in Trinity College Dublin, a member of a packed audience consisting largely of parents and educators – of which I was neither – waiting for the play to begin, while, outside, the humid evening unravelled like a long orange ribbon. Fanning myself with my ticket stub, I had wondered what difference a play by a group of privileged, wide-eyed, purple-haired teenagers in ripped denims could possibly make. But it didn’t take long for my cynicism to be challenged.

Your passivity, your sympathy, your outrage is not enough, the piece ultimately seemed to be saying

Rather than featuring protected kids pretending to be refugees, the performance was made up partly of those students’ own words and observations about what they’d seen and heard, and partly also of compelling video accounts by other teenagers, those living in the limbo of direct provision. When images of these crushed and confused young people, contemporaries of the exuberant, passionate youth on stage, flooded the theatre, the effect was powerfully direct and emotional.

These teenage refugees, some long after completing their Leaving Certificates but still unable to take up college places because of their status, talked movingly about their lives slipping through their fingers, like the wet sand at Mosney, the former holiday camp that is now a direct provision centre.

Your passivity, your sympathy, your outrage is not enough, the piece ultimately seemed to be saying, to parents and teachers, to legislators and opinion-makers. It is no longer enough to shake your well-educated heads in a torpor of lazy despair.

When the students, some weeks earlier, brought the production to Dublin City University, performing to staff, students and some of the Syrian asylum seekers from Mosney, the experience, for performers and audience alike, was, they said, profoundly upsetting, a reliving of past traumas, a blunt account of Ireland’s less than heroic response to a humanitarian crisis. But something else happened too: young asylum seekers felt recognised and heard, and it mattered to them not to be forgotten.

Why are some lives valued more than others? And who makes it that way?”

They need to go on being heard, their fate continually remembered. It is our collective responsibility, the piece clearly showed, not to let direct provision become another guilty chapter in a history tattooed with shame and bleached in indifference to unpalatable and inconvenient truths.

From a production laden with moving testimonies that rested somewhere on a tender shoot of hope and anger, I leave you with another response from one of the student writer-performers to the death of Alan Kurdi. The image of his body, washed up on a Turkish beach in September 2015, is, for many of the students, emblematic of their sense of powerlessness. But for me, witnessing the articulation of their outrage is as close as I feel to hope.

“I was at a play once in which a man described what it’s like to drown. He said at first there’s panic, yes, but soon you become one with the water. I imagine it like floating in amniotic fluid, unconscious, feeling no further weight on your legs. Not long after being in the womb, there he was. He deserved peace in this world. Could we have given him that peace? Did it have to come to this? Why are some lives valued more than others? And who makes it that way?”