What is a micro-cheat and are you one?

Could you be cheating on your partner without knowing it? The internet thinks so 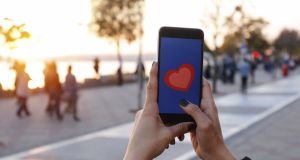 “Micro-cheating” is infidelity for the digital age, meaning it does not involve the exchange of bodily fluids, knowing glances, or any form of physical contact. Photograph: iStock

There are worrying signs of a new puritanism creeping into relations between the genders. Last summer, a survey of over 5,000 adults for the New York Times found that significant numbers of heterosexual Americans regard eating lunch, driving in a car, or even having work meetings alone with someone of the opposite sex as sexually risky behaviour.

And now, the internet is awash with warnings about a new way to be unfaithful without even knowing it. Called “micro-cheating”, it is infidelity for the digital age, meaning it does not involve the exchange of bodily fluids, knowing glances, or any form of physical contact.

Instead, it involves such apparently licentious practices as liking your ex’s six-month-old Instagram post or sending them “romantically-charged” emojis (step forward, you wanton, scarlet dancing lady).

According to Google Trends, the term first emerged in 2004, but it really only exploded into the public consciousness in the first week of 2018, as an article in Thought Catalog highlighting “33 signs your boyfriend is micro-cheating” went viral.

The signs include having inside jokes with people other than your significant other or sending them a “nice to meet you” message “unnecessarily”. Over- and under-mentioning a person of potential sexual interest to your partner are signs of either micro-cheating, or compensating for your micro-cheating. Yes, it is a quagmire.

Micro-cheating is a “grey area which falls between flirting and unfaithful behaviour, with examples including the use of romantically charged emojis in a communication with someone outside of your relationship [or] having a secretive online conversation online with them,” explains Dr Martin Graff of the University of South Wales, who conducted a study on micro-cheating that is currently under review in the Journal of Personal and Social Relationships.

Interactions late at night were judged as more unfaithful than those taking place in the day, due to the secretive nature of night-time interactions

Participants in his study were given different scenarios to judge on the basis of whether they considered them to be cheating behaviour. The scenarios took place at different times of the day, and involved different degrees of disclosure.

“Not surprisingly, interactions late at night were judged as more unfaithful than those taking place in the day, due to the secretive nature of night-time interactions. Similarly, higher disclosure levels between people were judged higher in terms of unfaithful behaviour,” he said in a statement.

But can loaded emojis or inappropriate Instagram likes ever really be said to constitute cheating? It depends, suggests Graff, on the “context and intent”.

Aisling Leonard-Curtin, a chartered psychologist and co-author of The Power of Small, which is due out later this year, agrees that it’s not the behaviour itself that determines whether there is cheating involved, but what those engaging in it hope to get out of it.

If you’re wondering whether you’ve crossed a line, ask yourself “what is the motivation driving the connection,” she advises. “Look at why you’re doing it, and ask yourself ‘if the shoe was on the other foot, how would I feel?’”

I don't understand what people don't understand about this #Microcheating trend. It isn't about not having friends outside your relationship...It's about behaving inappropriately with those friends that you wouldn't want your partner to know about. That's what the definition is.

I just learned about "micro-cheating" and I want to have an intervention for straight people and explain to them what "having friends" is.

Tips to avoid "Micro Cheating."
1. Don't date micros
2. Eat your exes
3. Dump the clinger accusing you of it, cause that's probably the tip of a giant crazy iceberg that will only make you miserable.

Psychotherapist Stella O’Malley sees the panic over micro-cheating as a potential excuse for over-zealous partners to micromanage each other’s interactions. “Yes, an emotional affair can be quite damaging. But you should be able to have a laugh with your ex, have a joke with someone at work, without it being considered cheating. We have a tendency to overanalyse everything and suck all the joy out of life. I’m very concerned about the joylessness that’s creeping into our interactions.”

O’Malley says the contemporary attitude that your romantic partner should be “everything” to you that can lead to high expectations and almost certain disappointment.

Feeling the occasional passing attraction to someone outside your primary relationship is normal, adds Leonard-Curtin. “If we try to tell people that you shouldn’t even think of another person, it has completely the opposite effect. We call it the pink elephant trap – the more we try not to think about something, the more you end up thinking about it, like in the experiments where you’re told not to think about pink elephants.

“We can’t control our thoughts; we can only control our actions. So it’s okay to have attractions – and it’s also okay not to always feel you have to talk about them to your partner.”

But while micro-cheating might be a preoccupation of junior Mike Pences – who famously said he would never have lunch with a woman other than his wife – there is a risk that it can cross the line into emotional infidelity. This is a real and potentially damaging phenomenon, defined by Relate as a “grey area where you know you’re more than just platonic friends with someone outside your relationship. There’s an emotional connection, an intimacy and often an attraction to each other.”

Dermot’s wife would have been “furious”, says Robert who knew these actions were inappropriate. In this case, the early meetings, texts and conversations could be termed “micro-cheating”, but the subsequent fantasy and photo sharing constituted an infidelity on Dermot’s part.

If you’re hiding romantic or sexual conversations from your partner, then you’re cheating. And you know it

Their situation highlights how micro-cheating or flirting can be problematic if the participant wants to take it further.

“Micro-cheating, as in liking online photos, itself is harmless,” says Robert. “What’s behind it is the real issue. It’s flirting without directly admitting to your attraction. If you’re in a relationship, but constantly commenting on someone’s photos because you’d like to date them, or want to have a sexual relationship with them, then it’s cheating.

“If you’re hiding romantic or sexual conversations from your partner, then you’re cheating. And you know it.”

Research by Graff and others has looked at the role of the “online disinhibition effect”, which suggests that we disclose more personal information, and do this more quickly in online environments, which can create an illusion of intimacy, and cause relationships to intensify quickly.

If you suspect your partner of becoming disinhibited with someone else, ask yourself why you think this, says Leonard-Curtin. “Be aware of your own history and thought processes that might lead you to feel like this. But if you’re noticing a consistent theme or pattern in their behaviour, do have a conversation with them.”

The other thing that can make virtual relationships seem more compelling is that our messy and often boring real lives – romantic and otherwise – can pale by comparison with the perfect versions we see others peddle online.

“There was a really interesting research study where they got women in heterosexual couples to rate their relationship satisfaction before and after watching a romantic comedy. And of course, they were much less satisfied after spending two hours looking at Ryan Gosling or whoever.

“Similarly on social media, we’re often comparing our very real life relationships to other people’s curated relationships, and that can leave us feeling like we’ve drawn the short straw.”

SIGNS YOU MAY BE A MICRO-CHEAT

Looking up your ex on Facebook is not cheating. There is another word for this: ‘curiosity’. But if you follow up by friending them, and then messaging them at 3am to compliment their new job/beard/bikini, and complain about your current partner not understanding you, that movement you just caught in the corner of your eye will be the sight of the line you just went whizzing past.

You send aubergine emojis to someone at work

Don’t even try to pretend you didn’t know emoji-sexting was a thing. Unless you’re a chef or a committed vegan, an aubergine emoji means only one thing. Other emojis that should be used with caution include the ‘admit one’ ticket emoji (especially risky when combined with the bed emoji); the orgasm face emoji (no, it does not denote ‘surprise’); the peach emoji (only ever used as a comment on the attractiveness of someone’s rear); the panting tongue emoji, or the fireworks emoji.

When your partner catches you sexting naked photos to “John Work” or “Hair Salon”, you’ll be out the door before you can say “fireworks emoji”.

You keep forgetting to delete Tinder off your phone

Nope, nobody goes on Tinder “for the laugh”.

Yes, yes, yes, we all do it – deep surfing other people’s Instagram accounts, trawling for evidence of bad skin days or previous partners. But to do it openly in the Instagram feed of someone who might conceivably be a romantic interest is as subtle a come-on as taking off all your clothes and lurking on their street corner with a rose gripped between your teeth and Let’s Get It On blaring on your Spotify.