We should ban the word ‘grand’ before we go mad

Imagine if everyone told each other how they were actually feeling 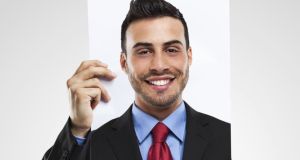 ‘Imagine the workplace where everyone is going around telling each other how they are actually feeling. It would be chaos, but nice chaos.’ Photograph: Thinkstock

There’s so much talk these days about overcoming stigma around “mental illness” that banning the words “mental” and “illness” would be a start. I would also ban the word “okay”. How many times a day do we say it? “How are you?” “Okay, thanks.” It’s the standard greeting and it means nothing. “Are you well?” “Grand, sure, nothing to complain about.” Banning the word “grand” would also help.

Most people live behind masks, never quite exposing their authentic selves.

“Authentic”. That’s a fashionable word in psychology speak these days. Being “authentic” means that you’re marching to your own beat, singing your own tune, not having to tell white lies because you are being yourself most of the time.

“So down I just want to spend the weekend in bed.”

“Anxious with a capital A.”

Imagine the workplace where everyone is going around telling each other how they are actually feeling. It would be chaos, but nice chaos. It might even improve productivity.

A bit of a luxury

Perhaps it’s a bit of a luxury, being authentic. Celebrities and talented artists make their livings being “authentic”. When you’re famous, it’s acceptable to be a bit loony. It may even be your calling card.

Concert pianist James Rhodes, author of Instrumental: A Memoir of Madness, Medication and Music, is an adequate performer, but what his audiences really love is his openness about the “madness” that provoked composers such as Beethoven and Bach to make sense of their crazy worlds through music.

He knows all about it, having gone “mad” himself over 30 years of coping with having been sexually abused by a sports coach at the age of six. His ex-wife tried to have the book banned, so fearful was she of the stigma it might place on their young son.

At the end of a self-exposing in-depth interview about his struggles with being a victim of child abuse and the psychological travails that resulted, John Murray, on RTÉ Radio 1, asked him, “How’s your health?” Rhodes answered that sometimes he felt “just a few bad weeks away from a locked ward, but apart from that not too shabby”.

“Very good thank you. Can’t complain at all,” he answered, in true Irish style.

The snap answer is, of course, polite. And it makes us all feel a little better on one level, but perhaps lonelier on another, if we believe everyone when they say they’re “right as rain”.

There’s a great illustration of this in psychiatrist Jeffrey A Lieberman’s book Shrinks: The Untold Story of Psychiatry. Lieberman attended the launch of a suicide-prevention charity organised by a famous socialite in response to her son’s suicide. It was a brunch event; socialites and other influential people snacked on smoked salmon, sipped Chablis and made polite conversation. These were the sane people helping out those who fall through the cracks. Or were they? Within days of the event, Lieberman started getting phone calls from the seemingly well-adjusted people at the party. One after the other, they rang him to share their psychological difficulties and ask for help.

Most of us are good at masking our inner turmoil, even though emotional pain and confusion are part of the human condition. It’s why the Irish drink so much and why there seems to be a new “mental health” charity or fundraiser launched every week. One of these efforts encourages people to share how they’re feeling with others. Another, for the Alzheimer Society, has posters with pictures of “normal” looking people with the slogan, “I have dementia, I’m still me”.

I’d like to see similar posters with “I have depression, I’m still me”, and “I have chronic anxiety, I’m still me.” People who suffer from such problems look just as normal.

Public campaigns encouraging openness are to be welcomed, but there is some way to go before people with mind problems are given more than sympathy. To feel empathy, you need to identify, but that’s difficult when so many of us are afraid to reveal our authentic selves. We live in a society where the unspoken mantras are “pull yourself together”, “look who you’re hurting” and “try going for a walk in the fresh air”.

A lot of us feel inspired by people such as James Rhodes who share their emotional trials. But would we do it ourselves? A fear remains that saying too much will stigmatise us.

And so we go on saying “okay”.

When we’re screaming inside.