We're living through the drippy Ed Sheeran era – where did the bad boys go? 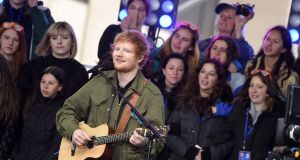 ‘Just 20 years ago, it may be argued, a milksop mewler such as Ed Sheeran would have been laughed off stage by the first audience he stood in front of’

Where have all the bad boys gone? The fast-living outlaw, dagger-eyed and smirking, was until recently a staple of popular culture. But we are today living through the Ed Sheeran era – when an inoffensive strummer can achieve chart-bludgeoning ubiquity precisely because he lacks sharp edges.

Long gone, it appears, are the days a dedicated ragamuffin such as Pete Doherty could expect elevation to the A-list simply on the basis of taking drugs in front of journalists and wearing a pork pie hat at an aggressive angle. Where once we flocked to dangerous celebrities – no matter how hammy or juvenile (or how terrible their headgear) we now recoil.

This is a seismic recalibration. Anti-heroes with a taste for the spotlight were allowed – nay expected – to hurtle through life, hang the consequences. From Frank Sinatra to Johnny Depp via The Rolling Stones and Richard Harris, roguishness wasn’t simply a bad habit among male celebrities: it was a condition of entry to the club. If you weren’t dangerous, you didn’t rate.

Just 20 years ago, it may be argued, a milksop mewler such as Ed Sheeran would have been laughed off the stage by the first audience he stood in front of. Setting aside the merits of his music (personally I would pay hard currency to never again have to listen to the bodhran-mediated torture that is Galway Girl), Sheeran’s persona is that of the harmless naif from up the road. His lyrics are drippy, his look might be kindly described as “unstyled” – even his tattoos are nerdy (if you want to put your kids off getting inked ask them if they really want to go through life looking as perpetually crestfallen as Ed).

What’s interesting is that Sheeran is in no way an outlier. Stadium banjo thumpers Mumford and Sons’ signature is Celtic folk with all the wildness sucked out (but with all that extra facial hair as bonus). What is Hozier, patron saint of Irish contemporary music, but a singing man-bun? Irish newcomers Picture This are a Coldplay ballad made flesh – plangent, bland, so unthreatening it borders on creepy.

The defanging of rock’n’roll hasn’t occurred in isolation. It is bound up with a broader shift – one that has seen our perspectives on how “famous” men should behave twisted inside out. Famous women, it should be noted, are judged much as they have always been – harshly and hypocritically (we demand perfection yet cannot conceal our delight when they inevitably demonstrate chinks of mortality).

Such upheavals are making their presence felt on screen too. Throughout the history of cinema, behaving badly was part of the job description of a certain kind of male movie star.

The professional knave was a beloved Hollywood archetype – from Jack Nicholson to Marlon Brando, there was an understanding audiences would not just forgive their antics but extract from them a vicarious thrill.

Yet here, again, all is changed. Remember when Johnny Depp was worshipped as Hollywood’s ultimate outlaw? He had tattoos, punched photographers, dated Winona Ryder and made it look as if he was doing her the favour. He was, in other words, assumed to be living the dream – all our dreams. And he did so without self-consciousness or apology. Behold a bad boy among bad boys.

Snap forward to today and Depp no longer preens on a pedestal – after all, what pedestal could support his swollen girth and all that Guns N’ Roses man jewellery?

Contrast the sweaty, multi-chinned figure Depp presents with squeaky clean paragons of common sense such as Chris Pratt, Matt Damon and Hugh Jackman. So wholesome is Pratt’s off-screen persona, in particular, he could even get away with playing a layabout lout who sexually harasses a colleague in Jurassic World without putting a dent in his image.

Indeed, he seems acutely aware that, where once male movie stars were obliged to blaze a trail of destruction, today the opposite is demanded. “In the silent-film era all you had to do was look right on camera, and then all of a sudden the talkies came and people had to match your voice with your face and some actors didn’t make it through that,” Pratt told the Nerdist podcast.

“In this day and age there’s a new third thing come to the forefront which is, ‘who are you? What is your personality like? Are you a decent person? How are you in an interview, do you squirm? How much will you give up of yourself?’

“That’s the new transition that people are having to make, and you see actors out there who have bad reputations, who are assholes, who treat the people around them poorly, who don’t get along with their fellow cast mates and shit on the crew and they just don’t get work any more.”

Some may argue there is a danger of throwing out the bad boy with the bathwater. Do we need to have a conversation about the fact Ed Sheeran represents the gold standard for 21st-century rock star? That the entertainment industry, as currently constituted, is incapable of giving us a new Oasis – much less another Brando?

The lazy argument is that this shift is generational – that modern teenagers and twentysomethings prefer their culture light to the touch, untainted by darkness or danger. The snowflakes want their idols snow-white to the core.

A more nuanced reading, perhaps, is that everything comes in cycles. Where once audiences swooned in the presence of outlaws and ne’er do wells, now those with manners and a sense of propriety have their chance to shine.

Such logic, of course, implies things inevitably turn full circle. Ed Sheeran and chums will eventually be replaced by a new generation of Pete Doherty and Liam Gallagher clones, scuffling with photographers and clutching their crotches, priapic monkey-style, as they mooch down the red carpet.

In which case, rather than condemning Sensible Ed as a harbinger of the music apocalypse, we should perhaps appreciate him for what he is: a nice young man who doesn’t mean to offend. It’s difficult to imagine – but what comes next may be more unpalatable by a considerable distance.