‘We are created in the image of God, so we’re all perfect’ 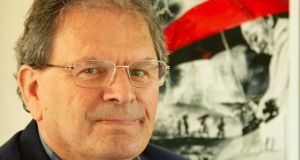 Gabriel Rosenstock: “If we’re talking about this incarnation, marrying Eithne was a change, for the better.”

The biggest challenge you have faced?

Waking up! Most of us are asleep. Don’t you think so? We have a haiku on the garden wall that says, “Tá na torbáin ina ndúiseacht – dúisímis leo”, which more or less says that if the tadpoles in the pond are awake, let’s rouse ourselves, too, into wakefulness. A challenge our children Héilean, Saffron, Tristan and Éabha had to face as kids was having to listen to this haiku a little too often!

The best advice you have ever received?

I’ve forgotten, so it couldn’t have been all that good.

I’ve forgotten, so it couldn’t have been all that bad.

A moment that changed your life?

Hold on a while now, which life are we talking about? I’ve been around before you know, as indicated in a book called Cuach ó aois eile ag glaoch, which translates as a cuckoo calls from another age. But if we’re talking about this incarnation, marrying Eithne was a change, for the better.

At the moment, Gandhi comes close, as I have got to know his strengths in the course of writing Walk with Gandhi, a book for young adults, and their seniors, that we launched in Liberty Hall in Dublin in October to celebrate the 150th anniversary of his birth.

The biggest influence on your career?

I was never a careerist. By the way, if you look at Gandhi, what a life! – but hardly a career. He never even held office. How did he manage to do that?

A practical thing you do to help your personal development?

I don’t believe in development. We are all of us perfect, since we are created in the image of God. If we needed development, then God would have some imperfections that I am entirely unaware of.

I don’t think of such things as imperfections as I’m constantly drawn to the transcendental.

Again, I don’t see the point of negative self-portrayal.

The thing you are most proud of?

We shouldn’t be proud. Gandhi loved the mango tree and said of it: “The mango tree as it grows and spreads bends lower. Similarly, as the strength of the strong increases, he should become progressively more humble . . .” I love that.

Your motto for life?

I have no motto but certain words in Irish give me some comfort knowing that they still exist – well, just about. Words such as aingeal, which means angel, of course, but also a burnt-out cinder taken from the fire, sometimes given in their hands as protection to children going out at night. It’s not a motto, it’s just a word. But, oh, what a word!

Gabriel Rosenstock’s life and work was celebrated at the IMRAM festival of Irish Literature, which finishes today. imram.ie