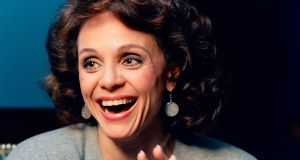 “My name is Rhoda Morgenstern. I was born in the Bronx, New York, in December 1941. I’ve always felt responsible for World War II.” These voiceover lines began each episode of the television sitcom Rhoda, in which the title character was played with great gusto and wit by Valerie Harper, who has died of cancer aged 80.

“The first thing I remember liking that liked me back was food,” the introduction continued. “I had a bad puberty. It lasted 17 years . . . I decided to move out of the house when I was 24. My mother still refers to this as the time I ran away from home.”

The show, which ran for 110 episodes between 1974 and 1978, made Harper, in the guise of Rhoda Morgenstern, a model for many young women wanting to make their own way in life. She was an outgoing and outspoken career girl, in an era when women in sitcoms were mainly the homebody addressees of “Honey, I’m home”. Harper herself was involved in the women’s liberation movement in the 1970s, and a campaigner for the Equal Rights Amendment.

The character of Rhoda, who was to win Harper four Primetime Emmys, first appeared in 1970 in The Mary Tyler Moore Show as best friend to Mary Richards, played by Moore. The characters served as perfect foils for one another: the quietly spoken, elegant midwesterner Mary, a TV producer, was calm and rational, whereas the bold and blunt Jewish New Yorker Rhoda, a window dresser, was impulsive and passionate. Mary went in for nicely tailored trouser suits, while Rhoda wore bohemian kaftans, headscarves and layers of chunky costume jewellery.

Harper was born into a Catholic family in the small town of Suffern, New York. Her Canadian mother, Iva (née McConnell), was a nurse, and her father, Howard Harper, a lighting salesman. Because of her father’s peripatetic work, Harper went to many schools throughout the US before studying ballet and acting in New York City.

Among her first breaks were as a chorus girl in the Broadway musicals Take Me Along (1960), Wildcat (1961) and Subways Are for Sleeping (1962). The always quick-witted Harper then joined the Second City improvisation theatre in Chicago, where she met Dick Schaal, a fellow performer, whom she married in 1965.

In 1970, while Harper was doing theatre in Los Angeles, a casting director for CBS saw her and invited her to audition for Rhoda in The Mary Tyler Moore Show. Harper made such an impression in the role that she was offered the spin-off series Rhoda in 1974. Being committed to Rhoda for four years left her little time to do anything else. But just before the series took off, she had her first credited role in a feature film as Consuela, the fiery, cheating wife of a cop (Alan Arkin) in Freebie and the Bean (1974).

After Rhoda’s run ended, Harper appeared in three dud films in showy supporting roles: Chapter Two (1979), The Last Married Couple in America (1980) and Blame It On Rio (1984). But she was most active on television.

Apart from regularly popping in as Rhoda on The Mary Tyler Moore Show, she starred in another sitcom called Valerie, playing a mother of three teenage boys whose husband, an airline pilot, is away most of the time. However, following a salary dispute, she was fired after the second series in 1987. Harper sued NBC and Lorimar for breach of contract and unfair dismissal, and was awarded $1.4 million plus 12.5 per cent of the show’s profits. The series continued without her, renamed Valerie’s Family and then The Hogan Family, with the explanation that her character had died.

There followed guest spots in Missing Persons (1994), Melrose Place (1998), Sex and the City (1999), That ’70s Show (2001) and Desperate Housewives (2011), among others. In 2000, Harper and Tyler Moore were reunited for a TV special, Mary and Rhoda – both characters now with grown-up daughters – with the intention of launching a new series. But it failed to rekindle the inspiration of the past, and the idea was abandoned.

After being diagnosed with lung cancer in 2009, Harper worked almost as much as before. In 2010 she took on the strenuous role of Tallulah Bankhead on Broadway in Looped, produced by her second husband, Tony Cacciotti, whom she married in 1987, her first marriage having ended in divorce. The New York Times critic praised her “enjoyably big, blustery performance, nailing every last laugh with a professionalism that the real Bankhead would surely admire”.

In 2013, Harper announced that she had a rare condition in which cancer cells spread into the membranes surrounding the brain. She appeared as often as she could on TV shows to talk about the illness.

She is survived by her husband and their daughter, Cristina. – Guardian

Dining out: 12 of Dublin’s best restaurants with outdoor spaces
5