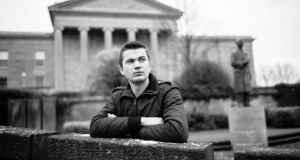 This article is part of The Irish Times Generations project. Since April 2014, people ranging in age from 20 to 102 have shared their views on Irish life, past and present, with reporter Rosita Boland. Read all those published so far at irishtimes.com/generations

I always knew I wouldn’t spend all my life in Clare. I would have seen there were opportunities outside Clare. I was very eager to move to Dublin; I noticed such a different mentality up here. I felt like people were a lot more open-minded here.

In so many places in rural Ireland you have to be part of some established clique to fit in, and that’s usually the GAA. It’s the older generation who established it and who now keep it going. If you’re not into GAA it’s hard. You might be as young as seven, but the abuse that is hurled at you on the pitch if you’ve played a bad game is horrendous.

Even at the age of 15 I felt a fear of recession. I stayed awake thinking about it. We didn’t know how bad it was going to be; my parents didn’t know, and we kids definitely didn’t know.

My mother, Anne Marie, is a secretary for a property developer, so there was a question mark over her job. It was a major fear, losing a job.

What the recession did to me was destroy any idea that I was entitled to anything, and I also knew that I was going to have to fend off so much competition for all sorts of jobs.

I was 18 when I came to Dublin as a communications-studies student at DCU. I was pretty naive. When I first moved up my accent was a running joke. When I was in my apartment once I stayed quiet when the angelus came on, and people thought that was funny, because I stopped talking.

Going into college, I would have seen myself as Catholic; coming out of college, I want nothing to do with it. I have liberal views. I hate the idea that the church controls so much of our education.

There is no one moment when you turn into an adult. When I turned 20 I felt fear. And shock that time had gone so fast. It wasn’t that long ago since I thought 20-year-olds were adults, and suddenly I am one.

I’m finishing college this summer, and I’m certainly not looking forward to leaving. University really is your own little world at its most liberal and accepting and nonjudgmental. It’s the most forward-thinking society you’re going to live in, and it works. Outside of that little world, in the wider society, judgment is cast on people all the time.

We have higher expectations for ourselves, the younger generation. I feel the older generation were told, you follow this path and that is your life; don’t question it.

The older generation are so reluctant to complain about the minor things we attach so much meaning to. If I break my phone I’m in a bad mood for the rest of the day, whereas my grandmother will say, there’s nothing so bad that couldn’t be worse.

I can’t wait until my age group are running society, because I think we have a much better idea of the way things should be. Our generation is more liberal and less judgmental.

I think Ireland has been run by older people – predominantly men – for too long. They’ve been behind all the things that have gone wrong with the country.

Ireland was a man’s world, and probably still is, but we are moving forward. Not fast enough but still moving. What I mean by older people is anyone over 40, who usually hold traditional values.

Many 20-year-olds are capable of taking on senior positions. It’s reverse ageism to suggest we aren’t capable. People in their 20s don’t have as much experience, but we’re open to the idea of young people being at the top of society and politics.

My generation wants to see liberalisation, marriage equality and the breaking down of the old institutions. I’d be excited to see that happen.

I really want to emphasise that my generation have radically different views to the older generations’. I can see on my Facebook page for the first time ever that people are putting up their status about the marriage referendum. I don’t think that happened with the Lisbon Treaty.

I will definitely be voting. I don’t want to be associated with a country who would say no to marriage equality, and I don’t think most people my age would want to be, either.