Veteran actor best known for ‘Last of the Summer Wine’ 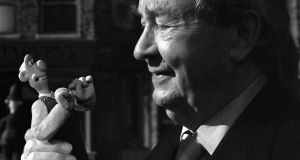 Peter Sallis with the character Wallace who he voiced. Photograph: PA

Often self-effacing and meek, but with a sly smirk and a beady eye that hinted at mischief, the actor Peter Sallis, who has died aged 96, played the cloth-capped widower Norman Clegg for 37 years in the BBC TV comedy series Last of the Summer Wine, and was also the voice of Wallace in Nick Park ’s acclaimed stop-motion animated films based around the adventures of a cheese-loving inventor and his pet dog, Gromit.

Running from 1973 to 2010, Roy Clarke’s meandering series about three childish old men getting into all kinds of scrapes in a small Yorkshire town was gentle and often poignant, and the character of “Cleggy” absolutely fitted Sallis’s nasal, hesitant and semi-apologetic speech patterns.

In Clegg’s wry utterances there were many stereotypical British qualities: understatement, calmness in the face of adversity, self-deprecation and, above all, a willingness to see the funny side of life.

And it was that wonderfully evocative voice that made Sallis first choice for the Wallace and Gromit films. He recorded the lines for Aardman Animation’s short A Grand Day Out in 1983 for a smallish fee, forgot about it, and it was six years later that Park rang him to say the film had been completed.

From such modest beginnings came an industry that, for Sallis, climaxed with his attending the Academy Awards ceremony in Hollywood, when the Aardman/Dreamworks full-length film The Curse of the Were-Rabbit (2005) won an Oscar for best animated feature.

Born in Twickenham, south-west London, he was the only child of Harry Sallis, a bank manager, and his wife, Dorothy (nee Bernard), and grew up in Palmers Green, in the north of the city.

In his autobiography, Fading Into the Limelight (2007), he wrote that his parents did not get on at all well: “I had a little prayer that I used to say: ‘Please God, make Mummy and Daddy live happily together’.”

After his education at Minchenden grammar school in Southgate, he followed his father into banking, as a clerk, and during the second World War joined the RAF. Turned down in 1943 for aircrew because of a disorder that might cause him to black out at high altitudes, he became a wireless mechanic and taught radio procedures at RAF Cranwell.

One of his students was putting on a production of Noël Coward ’s Hay Fever at a local YMCA, and Sallis agreed to play the leading male part, though he had never acted before. As he put it: “When I went on the stage and spoke the lines, people laughed . . . that night, in my bunk, I couldn’t sleep. I just lay there going through the play over and over again. I knew everybody’s lines and after a while I thought to myself, yes, I know what it is: I’ve got what they call the acting bug.”

He appeared in various other amateur productions and still had the bug when the war ended. He was accepted by the Royal Academy of Dramatic Art, London, on an Alexander Korda scholarship, and when he left was offered work in the theatre almost immediately – he had been taken on by the Myron Selznick agency while still at Rada.

The 15 years that followed contained what Sallis considered to be his best creative achievements: in spite of his later fame as a TV and film performer he always saw himself primarily as a serious stage actor.

His professional debut came in Sheridan’s The Scheming Lieutenant at the Arts theatre in 1946, and notable subsequent appearances included Orson Welles’s Moby Dick (1955) at the Duke of York’s theatre, Coward’s Look After Lulu (1959) with Vivien Leigh at the Royal Court, and Welles’s production of Ionesco’s Rhinoceros (1959) with Laurence Olivier, also at the Royal Court. He spent two seasons at the Lyric, Hammersmith – with John Gielgud in 1953 and the Fifty Nine Theatre Company in 1959.

He married the actor Elaine Usher in 1957, but it was not a happy relationship and she divorced him in 1965. They were briefly reconciled but she left him for good in 1983, describing him in tabloid newspapers as a devious, serial adulterer. Reflecting on his marriage in 2004, Sallis told the Daily Express that he was “not ideal as a husband”. The couple had a son, Crispian, who went on to become an Oscar-nominated film set designer.

Sallis began his television career at the top, with the title role in the 14-part BBC serial Samuel Pepys in 1958, and he also appeared in smaller parts in shows such as Doctor Who, Catweazle and The Persuaders!

His was already a familiar face, and Last of the Summer Wine made Sallis a household name; he was the only actor to appear in all 295 episodes of what became the world’s longest-running comedy series.

Clarke had already collaborated with him on various projects, and wrote Clegg with him in mind. Of the original trio of anarchic old men reliving their childhoods, Blamire (Michael Bates) was the figure of authority, the Nora Batty-besotted Compo ( Bill Owen ) was the funniest and most outrageous, and Clegg occupied a middle ground: a witty but timid little man who preferred to be observer and commentator on his friends’ follies but was invariably roped in to the stunts as a reluctant participant.

Bates died before the third series and was replaced first by Brian Wilde, as the ex-soldier “Foggy” Dewhurst, then Michael Aldridge as the former head teacher Seymour Utterthwaite and, finally, by Frank Thornton as the retired policeman Herbert “Truly” Truelove.

Owen died in 2000, and was never really replaced, though Brian Murphy as Alvin Smedley became Nora’s new neighbour. In the final two series the physical action was undertaken by younger members of the cast and Thornton and Sallis appeared mainly in indoor or background sequences.

The first Wallace and Gromit short film, A Grand Day Out, was released in 1990 to tremendous acclaim. It was nominated for an Academy Award, and from the start the voice of Sallis was a vital ingredient in its success. The Wrong Trousers (1993), A Close Shave (1995) and the full-length The Curse of the Were-Rabbit followed. All three earned Academy Awards, and Sallis was awarded an Annie award for voice acting for Were-Rabbit.

Sallis was 84 when the film came out, and his sight was failing through macular degeneration. He had no immediate plans for retirement and adjusted his life to meet the challenges involved, moving from his cottage close to the Thames in Richmond to a central London apartment and using a talking portable typewriter with a specially illuminated scanner.

With the aid of these devices he was able to voice Wallace in A Matter of Loaf and Death (2008) and the TV science show Wallace and Gromit’s World of Invention (2010), and then had to step back from the role.

Since 2011 Wallace has been voiced by Ben Whitehead. Sallis was also able to complete work on the final series of Last of the Summer Wine in 2010 and shortly afterwards he formally retired.

Just before doing so, he became happily reconciled to the fact that his enduring global fame lay with Wallace. “I realise now, though it’s taken me nearly a hundred years, that my voice is distinctive,” he said. “I’m very lucky indeed.” In 2007 he was appointed OBE. Sallis is survived by Crispian and two grandchildren.