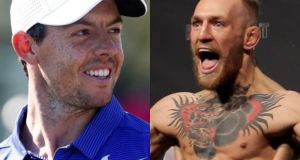 McGregor made it in at No 89, with a total of $34 million. His much-touted potential boxing fight with Floyd Mayweather could see him pocket up to $75 million if it comes to fruition.

Pop star Taylor Swift has fallen from No 1 to 49th place on the 2017 list after her earnings dropped $126 million in a year.

Rapper and entrepreneur Sean “Diddy” Combs topped the list for 2017 with annual earnings of $130 million. Combs’s big payout was thanks to his Bad Boy Family Reunion Tour, earnings from his Sean John clothing line, and his partnership with Ciroc vodka.

Beyoncé moved into the second spot with $105 million, courtesy of her bestselling Lemonade album and world tour.

Britain’s top earner was Harry Potter author JK Rowling ($95 million), who moved back into the top three thanks largely to her Harry Potter spin-off movie franchise Fantastic Beasts and Where to Find Them.

The novelist’s return to the list, comes two weeks ahead of the 20th anniversary of her first book in the wizarding series, Harry Potter and the Philosopher’s Stone.

Swift led the top 100 list in 2016 with takings of $170 million thanks to her successful world tour, which raked in a quarter of a billion dollars and saw her travel the world from May through December in 2015.

Swift’s new position on the yearly entertainment round-up follows her recent return to streaming giant Spotify after a three-year absence.

Rowling was just one of two British entries in the global top 10. Coldplay secured eighth place with earnings of $88 million, after failing to make the list in 2016.

Other British celebrities in the top 100 list include musician Sir Paul McCartney at No 32, DJ and producer Calvin Harris at 40, Formula One driver Lewis Hamilton at 46, and TV and music mogul Simon Cowell in 50th place.

Forbes ranks talent from across the entire entertainment industry to compile the annual list, and its findings are based on numbers from Nielsen, Pollstar and IMDB, as well as interviews with industry experts and many of the stars themselves. This year its top 100 have earned a cumulative $5.15billion before tax between June 2016 and June 2017.