‘The sparks flew. He became more than a driving instructor’

New to the Parish: When a Polish woman moved to Wexford and started driving lessons, she acquired more than a licence 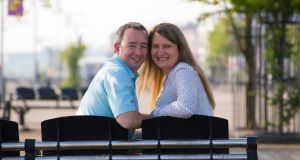 Dressmaking always felt like the obvious career path for Agnieszka Tyghe. She was just 15 when she began her training in the trade, following in the footsteps of her grandmother, who worked as a dressmaker during the second World War.

“She used to make the clothes for my dolls. People back then were really into sewing and knitting. They had to learn because they needed to make their own clothes. I was really impressed by my grandmother’s knitting skills, so I think she was an influence. She inspired me.”

1 Pricewatch: Left on the shelf - what we are no longer buying
2 Unidentified man has been in Irish psychiatric hospital for 30 years
3 Coronavirus: Numbers receiving pandemic payment falls as thousands return to work
4 Prof Luke O’Neill: ‘It’s definitely beatable, Covid-19’
5 Ireland’s coronavirus restrictions may lift more quickly if case numbers keep falling
6 Dominic Cummings affair reflects Brexit exceptionalism
7 Tax on Covid-19 payment could cause 'terrible shock' late in year
8 Archaeologists are ‘quite sure’ they have found Red Hugh O’Donnell’s burial place
9 Coronavirus: People told not to make appointments to buy furniture
10 Dominic Cummings controversy: The unanswered questions
11 Una Mullally: Young people will rebuild Ireland from ashes
12 Tiger shines and Brady bites back as charity match proves an enjoyable release
13 Maureen Dowd: Trump has been wearing a mask for years
14 Player Wills site: Hines and APG to seek permission for 416 homes
15 ‘What planet are they on?’ — UK press attacks Johnson and Cummings
16 Temperatures expected to hit 25 degrees on Thursday
17 Róisín Ingle: My sister Rachael dropped me at that London clinic in a black taxi
18 Eamon Ryan leaves door open to becoming tánaiste
19 André Leon Talley: How Anna Wintour threw her right-hand man ‘under the bus’
20 There’s absolutely no anonymity in this year’s Leaving Cert
21 How Jacinda Ardern’s straight talking sold a drastic lockdown to New Zealand
22 Ken Early: Liverpool fans, Bamber Gascoigne and a close shave in Istanbul
23 The Offload: Philip Browne’s grave outlook should be taken seriously
24 Government to face opposition for plan to cut €350 Covid-19 payment
25 Sinn Féin massively dominant on Facebook during general election
26 Hairdressers to present proposals for earlier reopening
27 EU divisions laid bare by ‘frugal four’ Covid recovery proposal
28 Pricewatch: Coronavirus has given us four categories of shopper
29 Fintan O’Toole: Ireland is again collateral damage in Britain’s self-harm
30 Teachers at Donegal school give sixth-year students a 1980s sendoff
31 Maureen Gaffney: ‘Covid-19 has scored a direct hit on our most basic psychological drives’
32 Traveller realities amid the pandemic: ‘I thought I’d never see a sup from a tap again’
33 Dublin could be heaven: Frank McDonald reimagines the capital
34 ‘Oh my God, how do you stand there and know that the whole nation is looking at you?’
35 Eir sells mobile mast infrastructure company for €300m
36 Case of Irishman allegedly murdered in Australia mentioned in court
37 Patio pleasers: 10 tips for summer plant pots that will flower all season long
38 What will happen to all those new hotels Dublin was to get?
39 As news gets better, can the pull of The Field be resisted?
40 The Irish Times view on the new Garda powers: Enforcing the unenforceable
Real news has value SUBSCRIBE