The disappearance of Trevor Deely, part 2: the search 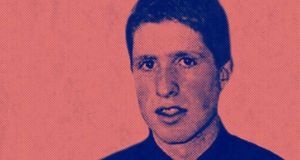 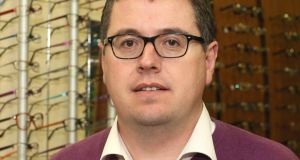 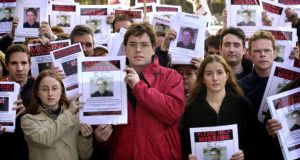 Trevor Deely vanished from the streets of Dublin in the early hours of December 8th 2000. His disappearance at the age of 22 was the subject of a high-profile search and publicity campaign, but no trace was ever found. Part one of this series recreated the days and hours leading to his disappearance. Below, Rosita Boland chronicles the search for the missing young man. Part 3 will explore the effect on the Deely family.

‘You get a sixth sense when something is wrong,” says Mark Deely, recalling the first call he got while he was at work in Castlebar, Co Mayo, that indicated his brother Trevor was possibly missing.

“I got a phone call at around 10.30 on Monday from Mum. She was not quite in hysterics but she was frantic. Trevor’s work had been on to her: they’d said he hadn’t been at work on the Friday and that he wasn’t in on the Monday either, which was completely unusual and out of character.”

On the Friday morning, the morning after the BIAM Christmas party, Trevor did not turn up for work. This was noted benignly by his colleagues and by his boss, Daragh Treacy.

“A number of people wouldn’t have showed up the next day, but it was most unusual for Trevor. For all the nights he would have been out with the guys socialising, he was never, ever late for work. It was let slide on the basis that, look, it was a late night.”

When Trevor did not appear on the Monday either, “alarm bells started to go off with us”, says Daragh, “because this was way out of character for Trevor. We knew very, very quickly he wasn’t in.”

He first ascertained that nobody had spoken to Trevor over the weekend. Trevor’s mobile was called but was not answered. Daragh then went to human resources. “I said, ‘We have a problem here. This guy is not to be found. We can’t get hold of him and we don’t know where he is. What should we do?’ ”

Then a series of calls started fanning out across Dublin, Naas and beyond, alerting family and friends to the fact Trevor could not be located. The first call was made to Ann Deely, Trevor’s mother, at the family home in Naas. She in turn called her husband, Michael.

“The first call was just saying he hadn’t come into work, but that didn’t concern her too much.” Not long after, she called again and asked Michael to go check on the apartment in Serpentine Avenue in Ballsbridge that Trevor shared with two others. None of Trevor’s friends she contacted had seen or heard from him since the previous Thursday.

Michael Deely did not have a key for his son’s apartment, and nobody answered when he rang the doorbell. “My head began to buzz eventually when it began to dawn on me: could he be missing? I was getting more and more concerned, thinking, Is this going to be our situation? Is Trevor a missing person now?”

After Mark Deely took the call from his mother that morning in Castlebar, he decided to leave for Naas immediately. “I went into work and cancelled whatever had been organised.” His wife was three months pregnant at the time with their first child, who was to be the first grandchild for Michael and Ann. She stayed behind. Driving away, he had no idea how long he was going to be gone.

As it turned out, Mark Deely would not return to his home in Castlebar for more than two months. “It’s funny the things you remember,” he says of that drive east. “I stopped at a butcher’s in Clane, and I went in and bought three fillet steaks. I’ll never forget it. I knew what I was doing: I was going to get something to eat, and make sure my mum and dad had something to eat, and I was going to go up to Dublin and look for Trevor.”

Both his parents were at home when he arrived later that afternoon. “We were going absolutely frantic, and no wiser as to where he could be,” says Michael. By evening, the decision was made to report Trevor’s disappearance. Glen and other friends went with Michael to Naas Garda station. Ann remained at home to man the ever-ringing phone.

By then, Mark had arrived in Dublin. He had used his father’s pass to park at the Bord Bia offices at Clanwilliam Court on Lower Mount Street. It was dark and there was an anticipatory buzz around town at the prospect of the visit to the city next day of the then US president, Bill Clinton. “I don’t think I was fully sure what I was going to do. I didn’t know exactly the timeline of [the Thursday night] at that point.”

Mark started at Copper Face Jacks, thinking Trevor might have gone back there, and asked if there was “any chance a fellow could be lying around here over the weekend?” He then walked a route out towards Trevor’s apartment in Ballsbridge. He went into alleyways, looked in skips and opened big bins. “I suppose when I look back, what I was doing was looking for him. I expected to find something bad.”

He talked to the security guard in front of the US embassy. The guard told him that due to the imminent Clinton visit, all skips and bins had been emptied over the weekend, and all manhole covers sealed and checked, and that Mark was probably wasting his time looking for anything that might have been dropped or lost.

“Any looking I was doing became cursory looking after that.”

After the call he went into the Horse Show House on Merrion Road and asked for a large brandy. “I was nearly in danger of losing it, emotionally. Before the girl came back with the change, it was gone. I said to her, ‘Can I have one more of those, please?’ ”

Michele Deely, Trevor’s sister, was at a friend’s house in London that Monday evening when her mother called with the news. “I put the phone down and said to my friends, ‘I have to go home.’ There was an instant realisation that this was bad. I couldn’t think straight. I knew it was bad. I knew it was awful. It’s like a flash of light; it just blanks everything else out.”

She came home the following morning on the first flight she could get.

“Mum stayed at home with Dad, and myself, Mark and [our sister] Pamela and Trevor’s friends and colleagues and Dad’s work colleagues looked for him. People were amazing; the help they gave us.”

Once a timeline of Trevor’s last known movements had been established, they realised that they had lost almost four vital days of the search for him.

“We were four days late, unfortunately, so you’re working with a different set of cards completely,” says Det Sgt Michael Fitzgerald, who worked on the case from the beginning.

“I was gone from half seven in the morning to midnight the whole time,” says Mark. The wide circle of Trevor’s family, friends and colleagues, and Michael Deely’s colleagues, organised into teams.

They put up hundreds of laminated posters, distributed thousands of leaflets, went house to house, went into pubs, clubs, restaurants, stood on street corners, spoke to homeless people and sought CCTV footage. They mapped all the possible permutations of Trevor’s route home and searched every one. They did this day after day, night after night.

Dubliners that December became accustomed to seeing Trevor Deely’s face looking at them from countless lamp posts and poles across the city. Some of the posters remained there for many months, and even years, until they finally disintegrated. Nobody wants to be the person who removes the poster of a person who remains missing.

“I don’t think the police could keep up with us,” says Michele.

“They were very proactive,” says Det Sgt Fitzgerald. “I’ve never worked on a case where the family were so proactive.”

“The Deelys set the standard for what families do when someone is missing,” says Supt Michael Cryan, the family’s fourth liaison officer. “The town is postered now before we get out the door.”

On Tuesday 12th, the day after Trevor was reported missing, the Grand Canal between Leeson Street Bridge and Baggot Street Bridge was searched by a subaqua team.

“The canal became, to my mind, the most obvious place for something to have happened,” says Mark. He stood with his sisters and friends, on the banks of the canal, watching the divers work. “You have yourself braced,” he says.

“People are passing by and they’re stopping and gawking, and your focus is on the divers under the water and who’s going to come up with something, and you’re getting yourself ready for that.”

Michele says, “I was fully expecting them at that time to find Trevor, and every time they pulled something up I was just waiting. And when they didn’t I was doubtful. And then we found the CCTV footage that found he had crossed that body of water anyway. It corroborated what the diving unit had said. No umbrella had been found, nothing.”

Tosh Lavery, a former garda who worked in the force’s subaqua unit for 30 years, was one of the people diving in the Grand Canal that day. “The canal is an easy place to search; it’s like a swimming pool,” he says.

“If we had come up with a body in the canal, the investigation would have been over, but we don’t and the investigation gets bigger and bigger. Then we kept searching out, farther and farther. We searched the Dodder, and the fellows there weren’t even in wetsuits, they were able to walk through the water.”

He then speculates: “The brolly was never found and for me that says he never went into water.”

“If I won the EuroMillions, I’d do that in the morning. It’s the one thing I’d do.”

CAN YOU HELP? WHAT TO DO IF YOU HAVE INFORMATION

Anyone with information about Trevor Deely or another missing person can email the missing-persons bureau at missing_persons@garda.ie or contact any Garda station.