The disappearance of Trevor Deely, part 3: living with loss

The final part of this series explores the effect on the Deely family of losing their son and brother. ‘Family life will never be the same again,’ they say 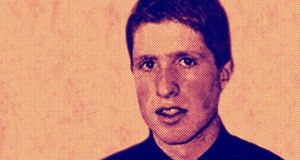 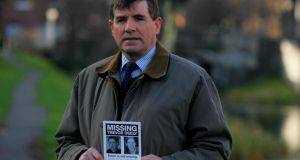 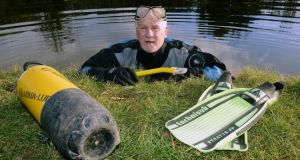 Tosh Lavery, formerly of the Garda subaqua unit, who took part in the search for Trevor Deely. Photograph: Dave Meehan 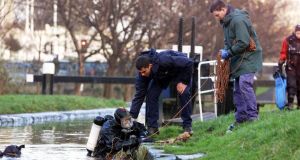 Trevor Deely vanished from the streets of Dublin in the early hours of December 8th, 2000. His disappearance at the age of 22 was the subject of a high-profile search and publicity campaign, but no trace was ever found. In Part 1 of this series, reporter Rosita Boland recreated the days and hours before Trevor Deely’s disappearance. Part 2 chronicled the search for the missing man. Part 3, below, concludes the series by exploring the effect on the Deely family.

Ciaran Casey is the helpline co-ordinator of the Missing in Ireland Support Services, which was established in 2003. It offers support to families and friends of people reported missing. “Garda liaison officers give families all the practical support they can, but they don’t give emotional support. That’s what we offer,” he says.

In January this year, the Garda press office issued press releases in relation to 13 people around the county who had been reported missing: nine men and four women. By the end of January, five had been found or had come home, three were still missing and five had been found dead. “People can be found dead in rivers, lakes or on land,” says Casey.

Cases of missing persons that remain unsolved, such as Trevor Deely’s, remain open. The file on the investigation into his disappearance is held at Pearse Street Garda station. Among the file are records of the 300 jobs assigned to the case, and more than 140 statements.

All files on missing persons remain open in case a body turns up and there is evidence of murder, because the case then becomes a criminal investigation. There is no specific police term for people who have been missing long-term. “They’re always missing,” says Det Sgt Michael Fitzgerald, who worked on the Deely case from the beginning.

“Families don’t know what to do when someone goes missing,” says former Garda diver Tosh Lavery, now retired. During three decades as part of the Garda subaqua team, he experienced first-hand the anguish of family members waiting for news as he dived.

Lavery was one of the team that searched for Trevor. “Families with missing persons will never be pro-guards until their missing person is found. Nothing will ever be enough that the guards can do, and you can appreciate that. Families can break up after someone goes missing,” he says.

‘It doesn’t get easier’

“Dad still gets stopped on the street, with people saying, ‘Well, it must be getting easier with time.’ Unfortunately it is one of those things where it doesn’t,” says Michele Deely, Trevor’s sister.

“There are many families suffering,” says his father, Michael Deely. “And they are all working with the same limited information that we are, and we all have to soldier on together.”

“The unfortunate thing for the family is that we just don’t know what happened,” says Supt Michael Cryan, the family’s Garda liaison officer. “If you can find a body, people can grieve. They have acceptance. They have a place to go. And the longer it goes on, the harder it gets.”

Not only was Trevor not found, but nothing he was known to have had with him that evening was found either. “Umbrella, coat, phone, wallet: nothing was ever found,” says Michele.

The weekend Trevor went missing, Michele called his mobile “probably four times” without knowing he was missing. She says his phone rang, but from this distance of time it’s impossible to be sure. At some point the phone went dead.

Dr Philip Perry is a senior research fellow in the radio and optical communications laboratory at DCU. When asked how a phone that operated in 2000 would operate if dropped in water, he says: “If the phone was on when it went in the water, it would be dead in seconds.

“The radio signals would not penetrate more than a few inches of water. So it couldn’t ring. If a phone has been in the water since 2000, there may still be a slim chance of getting the sim out of it and getting phone numbers off it, but that’s really all you could get from it now.”

“I don’t accept that [the Garda] couldn’t have done more at the time,” Michele says in relation to the fact that Trevor’s phone was never located or pinpointed via its network. “I know it wasn’t as advanced as today, but it was still the mobile-phone era: it wasn’t back in the day when there was nothing electronic or digital.”

Two gardaí travelled to Anchorage in Alaska, which Trevor had visited shortly before he disappeared. Det Sgt Fitzgerald was one of them. Trevor had “just appeared out of nowhere and it was rather difficult”, as he puts it. “He was not invited out.”

The gardaí interviewed the young woman he had gone to visit. Trevor’s sisters, Michele and Pamela, also travelled separately to Anchorage, with the same purpose. “There were no leads,” says Det Sgt Fitzgerald.

‘Everyone has a theory’

“Everybody has a theory. I get told theories today still from people, who will talk to me and say, ‘Oh, do you not think this happened?’ People do still think water. They talk about it a lot, and more people think about it from the angle that he took his own life, which is one thing I do know not to be true. I get asked a lot, ‘What do you think happened and do you accept it?’ I don’t know what happened and I’ll never accept it.”

Mark stayed in Dublin from December 10th, 2000, to February 22nd, 2001, searching for his brother. “I came back because I couldn’t do any more. I just ran out of ideas. I made the decision to come home because I said, ‘If I keep going the way I’m going, I’m going to drive myself absolutely mad; and it’s time for life to move on.’ ”

He hopes some day that there will be resolution. “Good or bad. It doesn’t matter. At this stage the unfortunate thing is that he’s been out of our lives so long now that in a way he has been dead for 14 years now. He hasn’t been alive to any of us; he’s only in our imagination, but that’s not the same as saying he’s officially dead.”

Michael Deely did not return full-time to his job at Bord Bia for six months after Trevor went missing. His office on Lower Mount Street, overlooking the canal where his son had last been seen, was a daily reminder of his loss.

“It couldn’t have been worse from that point of view. You were reminded every day and every hour when you went out.” He is now retired and the Deelys are grandparents of nine.

Both Michael and Ann Deely take comfort in their faith. “It’s very important,” says Michael. “You have to believe in something. You have to have the strength to get up the next day and carry on. When you finish each campaign, you’re down. There is still no phone call and still no breakthrough at the end of it.”

They hope that someone, somewhere, will yet recall something about the early hours of Friday, December 8th, 2000, that will solve the mystery of what happened to their missing son.

CAN YOU HELP? WHAT TO DO IF YOU HAVE INFORMATION

Anyone with information about Trevor Deely or another missing person can email the missing-persons bureau at missing_persons@garda.ie or contact any Garda station.

Turbocharge your barbecue: Tips from the pros for cooking over flames
9