Sr Aileen McCarthy obituary: a visionary who pushed the limits of rehabilitation medicine

She specialised in the care of patients with spinal cord injuries, and was a founder of Spinal Injuries Ireland 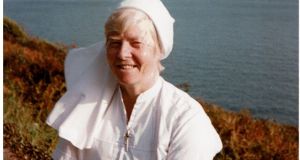 Sr Aileen McCarthy: “she challenged everything to get the best care. She was fearless in dealing with authority and bureaucracy”

Sister Aileen McCarthy, who has died aged 90, was a pioneering presence in the area of rehabilitation medicine in Ireland. Throughout her nursing career she specialised in the care of patients who suffered spinal cord injuries. She was a founder of Spinal Injuries Ireland, a charity that provides support services and advocates for people who have suffered spinal injuries. She was also was an accomplished sportswoman who represented Ireland at golf.

She joined the Sisters of Mercy in 1952, and was given the name Sister Marie of the Cross, but later reverted to her original name. Throughout her life she was an independent spirit with a healthy disregard for authority that occasionally got her into hot water with her superiors.

Aileen McCarthy was born in Cork in November 1928 to Dan McCarthy and his wife Christine (nee Hyde). She had an older sister Maura and three brothers Jim, Owen and Dan. She grew up in a very sporting household – her brother Jim was on the Ireland grand slam winning rugby team of 1948, and toured with the Lions in 1950.

She was educated in St Mary’s boarding school in Arklow, Co Wicklow. On leaving school she worked in the family painting and decorating business. Most of her time, however, was occupied playing sport – she represented Munster at hockey and swimming, and represented Ireland at golf in 1952, playing off scratch.

Her decision to enter the convent later that year at the age of 24 came as a surprise to her parents and siblings who, knowing her outgoing and somewhat rebellious nature, had serious reservations. However, it was a decision she never regretted even though it did mean abandoning golf, for a time at least.

After Sr Aileen took her vows in 1956, she trained to become a nurse working in Jervis Street hospital.

At the time the Sisters of Mercy, prompted by Dr Thomas Gregg, decided to convert the TB hospital on Rochestown Avenue in Dún Laoghaire into a rehabilitation hospital. In 1960, in preparation for this, Sr Aileen travelled to England with Sr Bernadette (who subsequently became the matron at the National Rehabilitation Hospital) and two other nurses Brid Murphy and Anne Kilcoyne. The group worked together at Stoke Mandeville Rehabilitation Hospital, and learned how to train nurses in rehabilitation medicine.

On returning to Ireland, Sr Aileen and her colleagues began getting the hospital ready. Dr Gregg was appointed as the first medical director of the NRH. In 1961, Sr Aileen began her first ward manager position in the NRH spinal unit, which was then called St Joseph’s ward – the first rehabilitation unit in Ireland. She was later appointed to the board of management of the NRH.

For over 50 years she worked with spinal injury patients on their rehabilitation, and was a powerful life-affirming presence in the ward. Her efforts significantly enhanced the quality of the lives of patients who had often suffered life-changing injuries.

Her friend and NRH colleague Eva Wallace said: “Aileen was a visionary. She pushed the boundaries of healthcare and challenged everything to get the best care. She was fearless in dealing with authority and bureaucracy.”

She also took a keen interest in what happened to patients after they were discharged from hospital. She travelled around the country on her Honda 50 motorbike to visit them, ensuring that family members had the necessary skills to look after the patients post-discharge from the NRH.

Her love of golf never deserted her, and she surreptitiously returned to the game in the late 1970s. It was not unknown to see her climbing down the fire escape of the NRH to sneak off to play a round of golf on her Honda 50.

However, her cover was blown when she won a competition at Lahinch Golf Club and the Irish Independent ran the story under the headline “The Swinging Nun”. This resulted in a dressing down by her mother superior, who pointed out that playing golf was unbecoming of a nun. Undeterred, she continued to play, but took the precaution of using the alias “Aileen Driver”.

Her commitment to the aftercare of patients led to the establishment of Spinal Injuries Ireland, which last year named its new headquarters the Sister Aileen McCarthy Resource Centre in her honour. It is a fitting tribute to a life spent selflessly caring for others.

She is survived by her brother Dan, and is predeceased by her sister Maura Zwiebel and her brothers Jim and Owen.