Obituary: Thatcher’s ‘favourite clergyman’ was, for some, George Smiley incarnate 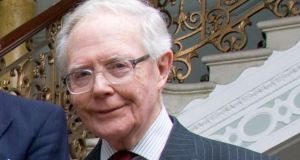 Sir David Goodall was an exceptional diplomat: as deputy secretary in Margaret Thatcher’s cabinet office, he and his boss, Lord Armstrong, the head of the British civil service, played the central roles on the British side in the negotiation of the Anglo-Irish Agreement of 1985.

The Anglo-Irish Agreement gave Dublin a significant role on all issues except foreign affairs and external defence in the government of Northern Ireland. The deal remains unique in international relations as a means to deal with a region that had been historically disputed between two sovereign governments and between the two main communities in conflict there.

The agreement was formally replaced as a concession to the unionists by the Belfast Agreement in 1998, but its terms are preserved and become the default arrangement for government in the event that the cross-community structures of the Belfast Agreement break down. This could prove significant should Brexit tensions threaten the peace process.

David Goodall was born in 1931. One side of his family had Wexford ancestors who were on both sides of the 1798 Rising. Though he had no professional involvement in Anglo-Irish relations until 1982, Goodall had a lifelong scholarly interest in Irish and, especially, Wexford history. He was president of the Irish Genealogical Research Society from 1992-2012.

Goodall was educated at the Ampleforth Benedictine Abbey in Yorkshire, where he early exhibited the talents of the highly accomplished watercolourist he would later become. He earned a First in Classics at Trinity College Oxford. He joined the British Foreign Office in 1956 and had a brilliant diplomatic career, culminating in his appointment to the vital role of British high commissioner to India in 1987.

By December 1982, Northern Ireland was in crisis, with many in the nationalist community dangerously alienated by the disastrous mismanagement of the hunger strikes. Earlier, and to Thatcher’s fury, Dublin had ludicrously oversold the significance of the “totality of relations” project as portending Irish reunification.

However, the forum was stymied as a negotiating instrument by Haughey’s repeated insistence that the only possible policy outcome was for Dublin to demand of Mrs Thatcher a united Irish State.

In September 1983, as an official at Foreign Affairs, I invited David Goodall to join me in an afternoon walk in Dublin. On Garret FitzGerald’s instructions, I argued that the alienation of the Northern nationalists from the system of government had reached such a venomous point that the British had no resource left to begin to address the problem on their own. I said the only possible mitigant would have to involve Ireland’s military, police and judiciary directly on the ground in Northern Ireland.

These ideas were reported to Mrs Thatcher and Lord Armstrong. Goodall returned to seek further clarification, and in particular to inquire whether the taoiseach would be willing to undertake to change Articles 2 and 3 of our Constitution in return for such measures.

Again on instructions, I said this could be done only if the settlement were broadly politically balanced.

These exchanges gave rise to a marathon negotiation, beginning in the absence of the Northern Ireland Office (by a unilateral British decision, which we found encouraging), between two sets of officials.

The Dublin party was led by the government secretary, the late Dermot Nally, supported by head of foreign affairs Sean Donlon, Irish ambassador in London Noel Dorr, and myself. The British team comprised Armstrong and Goodall and the British ambassador in Dublin, Sir Alan Goodison.

Nally and Armstrong, brilliant and highly experienced negotiators, had a relationship of profound mutual trust.

David Goodall epitomised for some of his Irish interlocutors the supremely gifted English schoolboy at his best. “My favourite clergyman,” Thatcher had called him.

Goodall was short of stature and slightly owlish in appearance. For some, he was George Smiley incarnate (David Cornwell, alias John le Carré, and Goodall had been friends ever since working together in the British embassy in Bonn in the 1960s). For others, he recalled the penetrating innocence of Father Brown.

The British negotiating team was necessarily augmented in 1984 by senior officials from the Northern Ireland Office in London. There were key meetings between Fitzgerald and Thatcher which, with the exception of the famous “Out, Out, Out” press conference, mostly saved the talks from breaking down, and in which the taoiseach showed forbearance and endless ingenuity.

At several stages throughout his career, David Goodall maintained private journals in which he recorded in sparkling prose entertaining vignettes of the absurdities and challenges of diplomatic life. These exercises, often redolent of the younger Waugh, will hopefully be published.

This is an insider’s account of the negotiations over 36 meetings (some lasting several days) and – perhaps even more gripping – of the sometimes vigorous infighting within the British side as the Northern Ireland Office strove doggedly to thwart or even stop the process.

Goodall’s narrative is laced with humour and anecdote. It is also a testament to Thatcher’s well-concealed but determined guile (and, indeed to her courage) that she continued to allow the embattled Armstrong and Goodall to press forward with the negotiations for nearly two years.

Thatcher did this despite her well documented dislike of all things Irish nationalist; despite several attempts by the Provisional IRA to kill her; despite the murder of many of her closest friends; despite the passionate objections of those she admired, such as Enoch Powell and Ian Gow (later murdered by the INLA); and despite her own almost physically palpable misgivings.

Goodall, Armstrong and the prime minister, even at her most reluctant knew exactly what they were doing: however painful, however convulsed the consequences, unionism’s hitherto impermeable veto on a shared future for Northern Ireland was at an end.

David Goodall’s contribution to the outcome and to the cause of peace and friendship in Anglo-Irish relations and in Northern Ireland has been historic and will, we must hope, prove to be irreversible.

Sir David Goodall, GCMG, was distinguished by many honours, including an honorary doctorate in law conferred by the National University of Ireland in 2015.

In 1962 he married Morwenna Peecock, Lady Goodall, his wise and vivacious life companion, who survives him with their daughter Elisabeth and two sons, John and Dominic.

Michael Lillis retired as deputy secretary general in the Department of Foreign Affairs in 1990. In the December 2010 edition of the internet journal The Dublin Review of Books, Lillis and David Goodall published parallel essays on the negotiation of the Anglo-Irish Agreement. See drb.ie/essays/ edging-towards-peace.

Our children have sacrificed so much – educationally, socially and mentally
6