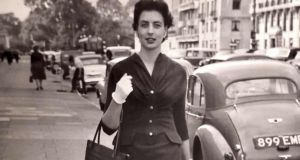 Catherine Freeman outside BBC Broadcasting House in London in the 1950s

The BBC in the 1950s was not a hostile place for women, but it was slow to recognise their abilities. Female employees had a task on their hands to prove they could produce serious work, and not just arts stories, which were considered by male bosses to be a “safe place” for women. Catherine Freeman, who has died aged 88, was a pioneering spirit, working with David Attenborough, Malcolm Muggeridge and Richard Dimbleby, under the producer Grace Wyndham Goldie.

As a young woman, Freeman often worked 14-hour days at the Lime Grove television studios in Shepherd’s Bush, west London. She was a producer and director of Panorama during the Suez crisis and the Hungarian uprising.

BBC foreign correspondent Charles Wheeler, who in 1958 would become her first husband, travelled to Budapest with a cameraman and Panorama’s only portable camera, capturing the last days of the revolution before the Soviets crushed it. Back at Lime Grove, he and Catherine fought with managers to feature the story prominently.

She dealt with world events and the need for change without losing her sense of humour. “Richard Dimbleby was on the border,” she later said, “but the antenna in the Alps was facing the wrong way, so we had to send a man up on a bicycle to correct it.” Her time on Panorama, and that of the whole team, was a chief influence on The Hour, the 2011 TV drama series about a new current affairs show at the BBC in 1956.

“The BBC was a male club,” the broadcaster Joan Bakewell says, “and Catherine was a bright, educated, hard-working member of the team, very powerful behind the scenes. Like many women who were doing what was considered a man’s job, she was a path-breaker. She had intellectual nous and social intelligence. She was the equal of any man and she represented something to which we women aspired.”

She pulled off a number of coups. Panorama was the first programme to show the birth of a baby on television and is thought to be the first to feature the word “f**k”, spoken by the playwright Brendan Behan live on air in 1957. “It was really the first decade of TV, and very experimental,” she later said. “We made it up as we went along.” She was responsible for one of the best hoaxes ever instigated at the BBC, when she produced a report on a “spaghetti farm”, made for April Fool’s Day, 1957.

Catherine, born in Penang, Malaya (Malaysia), was the fourth child of British parents, Harold Dove, the manager at a rubber plantation, and Eileen (nee Carroll), from a family of potters. The family returned to Britain when Catherine was a baby and she was schooled at the Convent of the Assumption in Ramsgate, Kent, later evacuated to Herefordshire, before attending a grammar school in Bromley and studying English at St Anne’s College, Oxford.

She joined the BBC after a six-month training course. As a producer on The Brains Trust, she was known for having a fearless attitude to booking interesting guests, and was responsible for the rehabilitation of the former journalist and academic Goronwy Rees, disgraced at that time for selling the story of his friendship with the spies Guy Burgess and Donald Maclean.

According to one source, she “badgered” the head of talks for an evening arts show, and in 1958 Monitor was born. It was initially intended that she be its editor but due to her inexperience (she was 26) it went to Huw Wheldon.

Her second marriage, in 1962, to the former MP John Freeman – by then New Statesman editor and Face to Face presenter, and later a diplomat – took her out of TV for a number of years. They had three children. When he was appointed high commissioner to India in 1965, Catherine became famous in New Delhi for her parties. The writer Prem Shankar Jha said they were like going into “a room full of fresh air”. The MP and journalist Tom Driberg called it “Camelot in Delhi”.

She fell in love with India and forged a connection that remained. During the 1967 drought in Bihar, she travelled through the villages and wrote a report for the UK Foreign Office, and she later raised funds to build wells. When her husband became British ambassador to the US, Catherine got along well in diplomatic circles, though she didn’t have a great liking for Richard Nixon. “I sat next to the president at one grand dinner at the White House, ” she said. “I was wearing a Jean Muir evening dress … Mr Nixon plucked at one of the sleeves and said, ‘All women should wear clothes like these all the time’ – a familiarity not really suitable in the circumstances.”

Her marriage to Freeman ended in 1976, at which point she returned to work, at Thames Television. Rising fast, in the 1980s she worked as the controller of documentaries, features and religion, and the was the originator of the Citizen 2000 programme, which followed a group of children from birth to 18, for Channel 4. She served both on the literature and the broadcasting panels of the Arts Council and was on the council of the ICA until 1993.

With a titanic memory for poetry, Catherine was formidably cultured and brilliantly opinionated. Young writers sought her out and she was a catalyst who brought people and ideas together.

She is survived by her sons, Matthew and Tom; her daughter, Lucy; and her grandchildren, Lily, James and Conor