When Hamill was fired from the Post, staff published scathing pieces about the owner 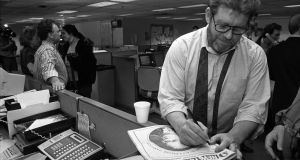 Pete Hamill autographs a copy of the New York Post on March 16th, 1993, following his dismissal from the position of editor in chief, in the newsroom in Manhattan. Photograph: Fred R Conrad/The New York Times

Pete Hamill, a high-school dropout who turned a gift for storytelling, a fascination with characters and a romance with tabloid newspapers into a storied career as a New York journalist, novelist and essayist for more than a half century, died on Wednesday in Brooklyn. He was 85.

The writer Denis Hamill, his brother, said he had a fall at his home in Manhattan on Saturday after returning from receiving dialysis and was in intensive care at Methodist Hospital when “his kidneys and heart failed him”.

In another age, when the newsrooms of metropolitan dailies pulsed to the rising thunder of typewriters on deadline, Hamill, searching for a future after years of academic frustration, navy life and graphic design work, walked into the city room of the New York Post in 1960 and fell in love with the newspaper life.

“The room was more exciting to me than any movie,” he recalled in a memoir, “an organised chaos of editors shouting from desks, copy boys dashing through doors into the composing room, men and women typing at big manual typewriters, telephones ringing, the wire service tickers clattering, everyone smoking and putting butts out on the floor.”

Hamill became a celebrated reporter, columnist and the top editor of the New York Post and the Daily News; a foreign correspondent for the Post and the Saturday Evening Post; and a writer for New York Newsday, the Village Voice, Esquire and other publications. He wrote a score of books, mostly novels but also biographies, collections of short stories and essays, and screenplays, some adapted from his books.

He idolised Hemingway and covered wars in Vietnam, Nicaragua, Lebanon and Northern Ireland. He lived in Dublin, Barcelona, Mexico City, Saigon, San Juan, Rome and Tokyo. But his roots were in New York, where he pounded out stories about murders, strikes, the World Series, championship fights, jazz or politics, and then got drunk after work with buddies at the Lion’s Head in Greenwich Village.

His presence at crises was uncanny. In 1968, he was steps away from his friend Senator Robert F Kennedy in Los Angeles on the night he was assassinated and helped subdue the killer, Sirhan B Sirhan. On September 11th, 2001, he was blocks away when terrorists attacked the World Trade Center, killing thousands, and described it in the Daily News.

He was widely respected in newspaper circles, not only for his innovative writing and advocacy of underdogs, but for promoting higher tabloid news standards and for standing up to publishers in squabbles over pay and treatment of employees and his own autonomy as an editor.

His first crack at running a newsroom came in 1993, when Peter S Kalikow, who had bought the Post from Rupert Murdoch in 1988, went bankrupt. Steven Hoffenberg, a shady financier who later went to jail, secured control and asked Hamill to become editor-in-chief and rescue the shaky paper. He was enthusiastic about it, had fresh ideas and seemed a perfect choice to resuscitate the patient. He would also write a column.

But he had three conditions: restoration of a 20 per cent pay cut recently imposed on the staff, money to hire more reporters and absolute editorial autonomy. Hoffenberg agreed. A month later, however, Abraham Hirschfeld, a buffoonish parking lot mogul who knew nothing about newspapers, won a court case to buy the Post.

He fired Hamill. The staff mutinied, publishing an entire edition filled with scathing pieces about the new owner. Hamill was rehired with a big, wet Hirschfeld kiss. Later, in his own protest over staff dismissals, he briefly edited the paper from a nearby diner. New Yorkers relished the uproar, but the turmoil ended when Murdoch bought the Post back and sacked Hamill.

In 1997, he got another chance, this time at the Daily News. Mortimer Zuckerman, the owner, hired him to replace a British editor who had turned it from a brash, tough-guy paper into a tattler of celebrity gossip and supermarket tabloid stunts to compete with the Post and New York Newsday.

Hamill refocused on city news, covering immigrants, ethnic communities, Russian mobsters and infrastructure problems. He serialised Mailer’s novel The Gospel According to the Son. Circulation fell, and Hamill clashed with Zuckerman, but staffers said he brought glamour, collegiality and respectability to the paper. More than 100 of them signed a letter urging Zuckerman to retain him. “He’s a mensch,” said JoAnne Wasserman, a reporter. But after eight months he resigned under pressure.

Hamill became nationally known for articles in Vanity Fair, Esquire, the New Yorker and other magazines, and for books. His first novel, A Killing for Christ (1968), spun a plot to assassinate the pope. “Pete Hamill is set on ripping the lid off the rotten church, the rotten upper classes, the rotten rightists,” John Casey wrote in a not entirely favourable review in the New York Times.

William Peter Hamill jnr was born in Brooklyn on June 24th, 1935, the eldest of seven children of Billy and Anne (Devlin) Hamill, immigrants from Belfast. His mother was a cashier at a movie theatre and a midwife in the maternity ward of Methodist Hospital, and his father, who lost a leg in a soccer accident, was often unemployed but sometimes worked in a factory.

Pete went to a Roman Catholic school and delivered the Brooklyn Eagle. Fascinated with comic books, he began drawing. He attended Regis High School in Manhattan, but dropped out in his second year to work at the Brooklyn Navy Yard. In 1952 he joined the US navy. Discharged in 1956, he studied at the Pratt Institute in New York and at Mexico City College.

Back in New York in 1957, he became a graphic designer for three years, but his future remained cloudy. Then a letter to James Wechsler, editor of the New York Post, got him a trial as a reporter, even though he had no daily journalistic experience. He was hired, got drunk in celebration and was soon writing prizewinning articles.

In 1962 he married Ramona Negron. They had two daughters, Adrienne and Deirdre, and were divorced in 1970. In 1987 he married Fukiko Aoki, a Japanese journalist. In addition to his brother Denis, a journalist, novelist and screenwriter, she survives him, as do three other siblings – Kathleen, a human rights lawyer; Brian, a photographer; and John, a spokesman for the Federal Emergency Management Agency – as well as his two daughters and a grandson. – New York Times