Sean Moncrieff: ‘They’re idiots. Leave it ... by the time I sit down again, I’m speechlessly angry’ 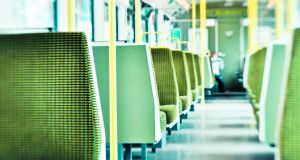 Should I have said something to the maskless man on the Dart? Photograph: Getty Images

I’m on the Dart, heading into work. It’s quiet. A couple of other workers, a family trying to keep the kids entertained. Two men get on: white, middle-aged. They sit in different seats, but conduct a noisy conversation.

He’s not wearing a mask. Neither of them is.

He shouts at his friend: “I’m not going to wear a mask because I’m not a sheep. No one is going to tell me what to do.”

But this isn’t a mindless rant. There’s structure; a rhetorical thread. First, he makes an ominous socio-political observation: all these people, being told what to do; and they’re just doing it.


Then he brings in hard science: where is the flu gone?

Finally, he deploys a soul-stirring patriotic argument: this isn’t what the men of 1916 died for.

I pick up my stuff and move to another carriage. I don’t want to listen to this. I don’t want to get involved in a pointless row. They’re idiots. Take a deep breath. Leave it. Yet by the time I sit down again, I’m speechlessly angry. While he was mouthing off, people with Covid were in ICUs, struggling to breathe. Or at home in bed, wiped out by the enervating after effects. Or stuck inside for months on end, fearful of going outside. And I was angry for me too: for all the daily soul-destroying crap we’ve all had to endure.

Should I have said something? Should I have pointed out that there’s no flu because people are wearing masks? That a republic where citizens care for themselves and each other is exactly what the men of 1916 died for? That the vast majority in this country are acting in a patriotic manner? That his “patriotism” –  and that of people like him – seems predicated on the idea that the vast majority of Irish people are idiots?

I spend the rest of that day coming up with l’esprit de l’escalier retorts. But none of them, I suspect, would have altered his point of view. We were sitting just three metres apart, but existing in different universes.

Donald Trump may be out of office, but the selfish idiocy dressed as ideology that he promoted lives on and will continue to do so. It has spread around the world through social media, self-reinforcing webs of belief and even attention-starved corners of the mainstream Irish media. Of course, Joe Biden had to appeal for unity and mutual respect. American presidents always do. We all do. But it’s a platitude. I can’t respect Dart Man’s legitimate point of view because his point of view is not legitimate. It’s a lie and an insult to the rest of us.

It will take the greatest minds of this century to figure out how to bridge that rational divide.

It may not be possible. Like Covid, we may have to hope that this thought-virus dies off. That could take a generation. In the meantime, those men on the Dart will spew their ideas to other people, to their children, somehow managing to convince themselves that all the evidence to the contrary is in fact evidence that they are right.

When I get off the train, I walk past their carriage. I notice that other people are getting off and getting back on again further up. Man Number One is still there, joined by others who are also maskless. He has just lit up a cigarette: because the right to smoke on public transport was what Padraig Pearse and the lads died for too.