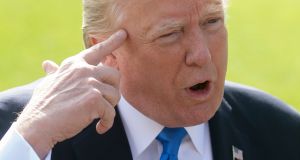 The current US president is the result of all our projections, from those looking for a disrupter of ‘political correctness’ to those who finally have a demonic bogeyman to whom they can affix all their loathing. Photograph: AFP photo / Saul Loebsaul LOEB/AFP/Getty Images

How time swoops by. It was only last year that we could still be appalled by Donald Trump’s involuntary verbal spasms. Back in those more innocent times, we assumed the global gasps at what he said would matter; that no one could really vote for this kind of thing.

Now, like bad weather and Brexit controversies, we’ve become inured to it. There’s virtually no one left for him to offend. Women, the disabled, football players, Muslims, the planet, anyone who isn’t white, anyone who is white with a sense of decency: we’ve all had our turn.

And with that, the power of his Twitter froth has started to wane. He’s become diminished, somehow: which throws up the question of whether Donald Trump actually exists. Yes, there are news reports and pictures and the daily vomit of tweets, but all of these could be easily manufactured. If anthropogenic climate change and evolution can be doubted, then why not the president of the United States?

Consider this: according to the Washington Post, ‘Donald Trump’ made 1,145 false and misleading claims since he took office. During and after his election campaign, he’s made repeated references to his friend “Jim”: but there is zero evidence that Jim exists. We haven’t seen tax returns, records of his charitable donations, passports records, medical records or evidence of his military deferments.

After sitting for only a few minutes in his suit and tie, Trump became impatient and irritable

‘Donald Trump’ claims he wrote the best-selling Art of the Deal, but he didn’t. It was ghost-written by Tony Schwartz, who in an interview with The New Yorker last year described the difficulty of getting his subject to speak about the past:

“He asked Trump to describe his childhood in detail. After sitting for only a few minutes in his suit and tie, Trump became impatient and irritable. He looked fidgety, Schwartz recalls, ‘like a kindergartner who can’t sit still in a classroom’. Even when Schwartz pressed him, Trump seemed to remember almost nothing of his youth, and made it clear that he was bored.”

Trump seemed to remember almost nothing of his youth. There’s scant documentary evidence that ‘Donald Trump’ is the person he claims to be. The TrumpBot on Twitter blasts out lies on a daily basis. So isn’t it time that we started to consider that Donald Trump isn’t real? That we, in fact, have made him up?

‘Donald Trump’ is like God, in the Voltaire sense: if he did not exist, it would be necessary to invent him. So that’s what we've done. He is a many-faced creation sprung from our darkest fears and wildest revenge fantasies. He is a self-made billionaire, he is a buffoon, he’ll bring back jobs to the US, he’s enabling white supremacists, he’s goading North Korea and Iran into war, he’s making America great again. He is all of these things and more, but also none of them. None of it comes from inside ‘Donald Trump’ because there’s nothing there.

The current US president is the result of all our projections, from those looking for a disrupter of ‘political correctness’ to those who finally have a demonic bogeyman to whom they can affix all their loathing.

Maybe that ancient mammy-wisdom is true. Maybe if we ignore him he’ll go away

Alright, there probably is a fleshy individual sitting in his pyjamas in the White House who goes by the name Donald Trump, but he’s not a person in the way we understand the term: more like a set of switches which only activate if there’s some exterior stimuli, and who only exists in the incorporeal world of the media.

So what if that stimuli was turned off? Maybe that ancient mammy-wisdom is true. Maybe if we ignore him he’ll go away.