Pioneering and inspirational figure in world of design and sailing 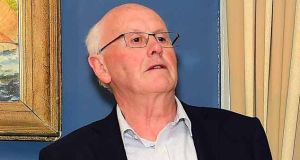 Martin Crotty: charming and helpful manner served to bring out the best ideas

Martin Gerard Crotty was a man of many interests and talents, most notably in design and sailing.

He served as president of the Institute of Designers of Ireland and vice-commodore and trustee of the National Yacht Club. In both arenas, his legal background, and charming and helpful manner served to bring out the best ideas, while a keen eye for detail ensured both work and leisure pursuits were done to a very high standard.

Martin was born into a legal and political family in Kilkenny and went to school locally in St Kieran’s College. Early family holidays in Duncannon, Co Wexford, engrained a love of the sea that was to last a lifetime.

In UCD, he studied politics and economics and then went on to qualify as a barrister. Though he never practised, he maintained a strong friendship with a group of King’s Inns classmates.

In the 1970s Kilkenny Design Centre and the the industrial development agencies of Shannon Development and Córas Tráchtála were helping focus Irish businesses on design excellence as a precursor to business success. This became Martin’s field.

He joined Shannon Development before going out on his own as and founding the pioneer firm VizMark, and then Martin Crotty Design, before forming BFK Brand Ltd with Kevin Barry.

His core expertise was design management and strategy and his excellence in this arena led to his being elected president of the Institute of Designers in 1988.

He was active in BFK Brand right up until May this year when cancer struck.

He had a great eye for things and a sense of wonder – and this led him not just to be an excellent sailor but to build a detailed understanding of the art of navigation by sextant and chart.

He initially sailed a Flying Fifteen dinghy in the National Yacht Club at Dún Laoghaire with Jim Gorman. After success in this arena, he wanted to do more offshore and long-distance events and bought a share with his best friend Peter Cullen in the Cruiser Racer half-tonner, Eliminator. They were the first Irish boat to win the prestigious Victoria Cup run by the Royal Dee Yacht Club, a thrilling victory. Peter and Martin moved up to the yacht Nyala and while doing a Round Ireland race in 1991 pulled into Dingle for refuge and repairs. It was here that the plan to develop the Dún Laoghaire to Dingle (D2D) race was hatched.

Martin was the first chairman of the NYC D2D and ran it successfully for 22 years, only stepping down this year. He served on the committee of the Volvo Dún Laoghaire Regatta and was vice-commodore of the National Yacht Club in 1993.

His sage advice was treasured by the Irish sailing community and he served as trustee of the National Yacht Club over the last three years.

Peter Cullen recalls their trips across the notorious Bay of Biscay, when in the midst of frightful winds and seas, Martin would remain composed, logical and humourous! He was excellent company, had a wide range of interests, which combined with his excellent navigation and sailing skills, made him a terrific companion on long voyages.

He was a private man and it was only in later years that we heard that his only brother Adrian had died in the Moorhead London Underground crash of 1975, along with 44 others.

He shared the last 30 years with his partner Sabina Saar and loved to spent time in Dromcollogher, Co Kerry, where they had a house. He is survived by Sabina, sister Marie Therese, nephew Luke and brother -in-law Noel Gardiner.