Latest Irish whiskey on the market is Velvet Cap 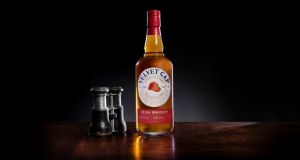 Made from 50 per cent grain and 50 per cent malt whiskies, Velvet Cap was finished in a mix of bourbon, port and stouted rye casks.

They just keep on coming. The latest Irish whiskey to be released is Velvet Cap from Blackwater Distillery, producer of some excellent gins, including Blackwater No. 5 and Boyle’s Gin for Aldi.

This is their first whiskey release, although owner Peter Mulryan is something of an expert in this area, having written a book, The Whiskeys of Ireland. Blackwater is based in a purpose-built micro-distillery in the picturesque village of Ballyduff Upper on the banks of the Blackwater river. The company had planned to open for guided tours in April this year, but Covid has put that on hold for the moment. Mulryan hopes they will be open for small bespoke visits in early July.

Mulryan and his distiller, John Wilcox, have distilled a number of fascinating whiskies using old mash bills in Ballyduff, but these are currently maturing. “Our own new make is now 18 months old, so it will be another two years before we release anything that has been distilled here,” Mulryan says. “We felt we needed to let people know that we are here and build some recognition. I think it’s good value, it’s a very nice, drinkable whiskey and well priced.”

Made from 50 per cent grain and 50 per cent malt whiskies, Velvet Cap was finished in a mix of bourbon, port and stouted rye casks. It has ripe plums, tropical fruits and vanilla on nose and palate, with a rich smooth texture. As Mulryan says, it’s a very nice drinkable whiskey.

Six thousand bottles of the first batch have been released, but more will follow. Velvet Cap is available for €40 from independent spirit retailers, and from irishmalts.com for delivery nationwide and worldwide. Mulryan’s book, available from the Blackwater website, documents the rise and fall of Irish whiskey, and is well worth a read.