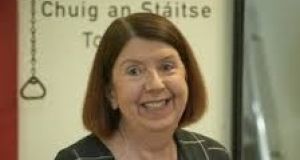 Stage and screen actor Rynagh O’Grady has died suddenly in her home.

A versatile actor who ably performed in roles in theatre, film and television productions, she was best known for her role in the hit TV series Father Ted. In that series, she played one half of the fighting couple, John and Mary, who ran a shop on Craggy Island and presented a nice front to Father Ted but bickered and insulted each other when on their own.

O’Grady trained in the Abbey Theatre School of Acting and first appeared on the Irish stage in 1969. Her contemporaries and friends from that time include Colm Meaney, John Olohan and Catherine Byrne. The plays she performed in include Donal O’Kelly’s Mamie Sighs in 1990 and more recently Deirdre Kinahan’s The Unmanageable Sisters in 2018.

Neil Jordan’s Breakfast at Pluto, Alan Parker’s The Commitments and Ron Howard’s Far and Away are among the many films she had roles in. She also starred in A Love Divided, Widow’s Peak, The Snapper, Moll Flanders and The Lilac Bus over her 50-year-long acting career. She was known in France for her role in the comedy, À nous les petites Anglaises (Let’s Get Those English Girls), made in 1976.

O’Grady started to write and direct plays and documentaries for television in the 1990s. In 1992, she won an RTÉ Jacobs Award for Born Bolshie, the documentary she wrote and directed on the theatre and television director Chloe Gibson.

In 2006, she toured Europe, Asia, Australia, New Zealand and the US with the one person show, Voices in the Wind with music played by her husband Eamon Murray.

In 2013 she wrote, directed and performed in Keep Coming Back, a play based on real life experiences of addiction in Ireland. The show toured Europe and north America. It was nominated for a Fringe First Award at the Edinburgh Fringe Festival.

O’Grady’s television work included many series including Bless me, Father for London Weekend Television, Blind Justice and Brotherly Love for the BBC, Ultimate Force for ITV, The Cassidys for RTÉ and Father Ted.

“I was thrilled to play Mary O’Leary in Father Ted. Arthur [Mathews] and Graham [Linehan] wrote fantastic wacky scripts with this undercurrent of shocking truth. We recorded it in front of a live audience in London which was good as it gave us something to bounce off.”

A committed socialist, O’Grady was actively involved in Irish Equity, the actors union and was chair of Women in Film and TV Ireland for many years. On film sets, she always stood up for the rights of actors and crew to be fairly paid and treated well.

She was also active in many political campaigns and had a passion for social justice. She regularly joined protests for the rights of Palestinians and Syrian refugees and latterly highlighted the plight of children of Yemen.

In 2015, she joined the Waking the Feminists campaign to push for a shift away from what she described as “an appalling bias against women” in the acting industry. “We all know there is nothing new in what was said and nothing new in the demands or reasoning but what is new is this wave of energy and this widespread support,” she said at the time.

Rynagh O’Grady grew up in Howth, Co Dublin, the second eldest of five children of Ken and Maeve O’Grady. Following her education at Santa Sabina school in Sutton and initial training at the Abbey Theatre, she moved to London, working for a time on productions in the Half Moon Theatre in the East End. She joined the National Theatre Company for more than three years under the artistic director, Peter Hall. “It was a wonderful company to be part of with every possible facility available and dance, voice and movement teachers at your disposal every day,” she said.

In the late 1980s, she returned to live in Ireland and bought a house near Glendalough, Co Wicklow. She and musician Eamon Murray, who she had grown up with in Howth, officially became a couple in the 1990s. They bought land in Greenane and built log cabins which they sold, keeping one as their family home. Over the years, the couple enjoyed many holidays in France where they married in 2010.

A warm and generous character, O’Grady had lots of friends and kept in contact with people from different stages in her life. She travelled both for work and pleasure and had an adventurous spirit travelling to India on her own in the 1980s and later to Mexico, Central and South America, north Africa and Asia.

Rynagh O’Grady is survived by her husband, Eamon Murray, her sisters Kate, Emer and Dara, and brother Kyran.