George McCullagh obituary: The MD of Brown Thomas was guided by his faith 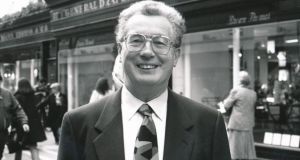 George McCullagh outside Brown Thomas: his son says he just wanted people to live together in peace, respecting each other’s heritage and beliefs.

George McCullagh, who has died aged 84, was a leading figure in the retail sector in Ireland and a prominent lay member of the Presbyterian Church.

Born on a small farm in Co Monaghan, McCullagh became an accountant and a partner in the long-established Dublin firm of Ormsby & Rhodes. A step change in his career at the suggestion of Galen Weston saw him take the helm at Brown Thomas. As managing director he was a driving force behind the expansion and development of the upmarket store, as well as being a strong supporter of the pedestrianisation of Grafton Street.

Peace for him was very important and, as a Monaghan-born Presbyterian, he really didn’t see the Border

His Ulster background, together with his faith, which he wore lightly but which was the bedrock of his outlook, allowed him play a not insignificant role in the peace process on behalf of the Presbyterian Church in Ireland.

“He really, really cared deeply about the North,” his son Ken recalled. “Peace for him was very important and, as a Monaghan-born Presbyterian, he really didn’t see the Border. He just wanted people to live together in peace, respecting each other’s heritage and beliefs.”

George McCullagh was born in October 1936 to Alexander and Mary (nee Branyan) McCullagh on a small farm near Ballybay. He had two brothers, Raymond and Alex, and a sister, Jean. He was educated at Dundalk Grammar School, one of only two children from his locality to receive secondary education at that time.

After passing the Intermediate Certificate (forerunner of today’s Junior Certificate) he moved to Dublin in the early 1950s. He lived initially in the Harding Boys Home on Lord Edward Street and later in a flat in Rathgar.

He worked for a time at Kinnears, as an articled clerk and qualified as a chartered accountant, before moving to Purtells and then Ormsby & Rhodes where he became a partner. It was in his role there as an auditor that he came into contact with Galen Weston, the Canadian-British retailer who was beginning to make an impact on retail in Ireland.

As Weston’s businesses grew from a single grocery store in 1961 into the Powers supermarket chain, followed by his acquisition of the bankrupt Todd Burns, which he renamed Penneys, and, in 1971, Brown Thomas, he and McCullagh worked closely as client and accountant.

In 1980, Weston offered McCullagh the managing directorship of Brown Thomas. It was a shrewd move and one not without risk for both men, but it proved to be a fruitful partnership for each.

McCullagh maintained Brown Thomas as the city’s premier upmarket fashion retailer (he was responsible for the first full colour advertisement in The Irish Times, on August 18th, 1986) and, 10 years later in 1990, secured the purchase of the shop’s nearest rival – Switzers which was immediately opposite. The debt-ridden group, which included Cash’s of Cork, Moon’s of Galway and Todd’s of Limerick, was secured from its then owner, Mohamed Al-Fayed.

After the sale of the original Brown Thomas store to Marks and Spencer, Switzers was gutted and rebuilt as Brown Thomas’s new home.

Over time, McCullagh expanded his interests. He took a leading role in the Dublin Chamber, serving as president, and over his lifetime was a director of several companies, many related to Brown Thomas, but also of Castle Park School, The American College, Dublin, and the PA Foundation, a Presbyterian Church charity that seeks to relieve poverty and promote education.

In the 1960s, he was one of the founders of the Dublin Christian Aid Committee, which evolved into Christian Aid Ireland. He also worked with Miss Carr’s Home, a Ranelagh-based charity originally set up for orphaned children (now Carr’s Child and Family Services), and Taney School in Dundrum.

For more than 60 years, he attended Adelaide Road Presbyterian Church – “a bedrock of his life”, according to his family. “His faith was so important to him and underlined his strong principles of doing what was right and looking after others,” according to Ken.

He was an elder of the church and served on several regional and national committees. As co-convener of the Church and Government Committee of the Presbyterian Church, he was involved in discussions with many of the leading figures in the peace process.

Whether at work or play, McCullagh was a man who needed to have a project in hand. One such was while considering switching from accountancy to retailing, he took the whole family on a 3,000-mile, two-month long road trip across Canada in a converted school bus, visiting family and exploring the Rocky Mountains.

He had many hobbies, several of them relating to competitive horses. He was a steward at the Turf Club.

The cornerstone of his personal life was his wife, Edie (nee Bourke), who survives him along with their four children, Ken, Bruce, Joy and Mervyn.