Tanya Sweeney: 'I shop just to feel something other than dread and anxiety'

Surely I’m not the only one emotionally spending my way through the Covid-19 pandemic? 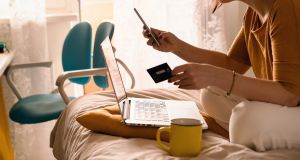 This week’s haul included a new foundation to complement the other five or six, a third teapot, bedclothes, a jumpsuit, a spree of six new books and new kitchen chairs. File photograph: Getty Images

My postman must hate me. Our interactions are starting to feel depressingly uniform: I open my front door most mornings in wreck-of-the-Hesperus chic (dressing gown and topknot); he lugs some box or another across the threshold while I make surprised “ooh, for me?” sounds. I don’t know why I always sound like someone has just gifted me something. The box comes, the bank balance gets leeched.

It’s going from bad to worse too. Last week my neighbour popped their head out of the door and, noting a significant number of brown boxes on the doorstep, wondered if we might be moving house.

This week’s haul included a new foundation to complement the other five or six somewhere in the bathroom, a third teapot, bedclothes, a jumpsuit and a spree of six new books on the Kindle. New kitchen chairs also arrived. “Where were you planning on putting the others?” my partner asked, not unreasonably.

I’m not just getting my adrenaline kicks when the overburdened postman knocks on the door. I am the queen of the spontaneous supermarket sweep, going in for apples and leaving with a slow cooker. The bank keeps blocking my debit card, believing most of the purchases – frequent, substantial spends here and there – to be the work of a canny, enthusiastic fraudster.

Why exactly am I doing this, amassing three teapots and six books at a time? Why am I buying things I don’t need and probably don’t even want?

I have long realised that shopping is my go-to stress response: the one way to chuck a soothing plaster over any kind of emotional problem. Stressed over work? Buying a new “office outfit” will help lance the boil (yes, I work from home).

I found myself in a strange cycle: the harder I worked, the more stressed I felt and the more I treated myself, using the logic that I was making enough money to cover the “treats”. My bank account would always hit zero at the end of the month regardless.

I spent the year after my mother died on the other side of the world in Australia, interrupting the slow ooze of grief – and, later, what felt like a nervous breakdown – with regular shopping trips. I remember the momentary dopamine hit before I handed over the credit card, then . . . nothing. And yet, I shopped and bought and amassed and stared at the clothes, knowing that I’d probably never wear half of them.

Experts coined a phrase at the outset of the coronavirus pandemic – “revenge shopping” – denoting consumers’ desire to reopen their wallets after being starved of opportunities to spend. A bubbling stew of anxiety, loneliness and a deep-seated general feeling of scarcity is usually the perfect starting point for emotional spending. Humans crave novelty and excitement by nature and where better to get that than an online sale, designed to quicken the pulse with phrases such as “only two left”?

“In the last hundred years, objects have become connected to emotions, rather than valued on their usefulness,” author and decluttering expert Emma Gleeson told me recently. “You might buy something not because it’s useful, but because it might build part of your identity. And in this time of individualism, we’ve also been taught that buying something new will make you feel better.”

Still, the official statistics hint that if indeed there has been pointless or emotional shopping going on, things are slowing down. Spending in Dublin retailers contracted in the fourth quarter of 2020, falling by 4.8 per cent compared to the previous three-month period, according to data from Mastercard SpendingPulse.

At last count, it is estimated that Irish households had put more than €123 billion into bank and credit union accounts by October 2020, up €12.6 billion from the year before.

Surely I can’t be the only one wearing out the add-to-basket function, just to feel something, anything, other than low-level anxiety and dread?

I checked in with some pals to see whether they were saving or spending. Perhaps I run with a fairly profligate bunch. One friend was investing hundreds of euro in luxury haircare, figuring that she might as well have nice hair if nothing else. Another friend admitted that she rarely left the supermarket without buying a gift for her home-schooled children – a way, she admitted, to mitigate the strange sort of guilt she felt about the circumstances. Someone else noted she had bought a bumper number of charity prints and started a cheese-club subscription. All open-and-shut cases of trying on a new lifestyle, curating a new self or, well, simple boredom, perhaps.

Next week, I will Zoom with my financial adviser and it is very likely that, as I am attempting to polish my fiscal halo in front of him with talk of credit union lodgements and tax bills, he will make loaded and withering references to “discretionary spending”. And once we start crunching the figures and realise just how much that add-to-basket habit has cost . . . well, there’ll be nothing boring about that conversation, will there?