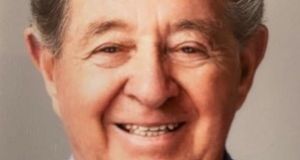 Liam (Bill) Harrington was a proud Mayo man with a beaming smile and a can-do attitude, who never forgot where he came from despite living in some of the world’s biggest cities.

His parents worked hard to put food on the table, and this work ethic was instilled in all of them as they were reared on the bogs and hayfields of their hometown.

His grandfather was a carpenter and built many of the houses in the village, and passed on this interest in woodwork to Liam, who later trained to be a carpenter.

After school he left rural Ireland and went to London for five years, where he worked for Wimpeys, a major construction company based in Hammersmith.

“He was just like, oh my God. It was everything and more. You could have your own apartment, your own telephone, a colour TV. He played Gaelic football, there were a lot of people from home there so he had a big base and he worked on a lot of the big buildings like the World Trade Centre, the Lincoln Centre.

“He just loved the American can-do spirit. Anything was possible there,” his son Jimmy says.

It was there he met his wife, Mary Gallagher, a nurse from Crossmolina in Co Mayo.

The couple married in America and had three children there – Jimmy, Karen and Michelle – before moving back to Ireland in 1975 and settling in Malahide, Co Dublin.

Here he ran his own small business, buying a couple of apartments in the city and renting them out while also carrying out repairs on people’s houses.

“He developed a love for the library in Malahide and I think if he had had a chance at more education he would have been an engineer or an architect, because he really loved the building industry and he wasn’t afraid to get his hands dirty. He made us work too, he was a hard taskmaster,” Jimmy says.

He had a real passion for Mayo, always seeking out Mayo connections with people he met and travelling all over the country and even to the Polo Grounds in New York to watch the footballers play. He remembered their last All-Ireland Final win in 1951, and lived in hope that he would see them lift the Sam Maguire again – but it was not to be.

Liam had dementia in his later years and a stroke in April 2020. He went to a nursing home in July and died on October 16th after contracting Covid-19.

Summing up his father, Jimmy says: “He loved the GAA, he loved his grandkids; he loved Malahide, Mayo and New York. He just loved life, he was a very happy type of a guy. He always had a beaming smile and a glint in his eye. He was loyal, a great family man and very positive – he would always say life is too short.”