Ruth Negga: ‘There aren’t many black people on film sets’

The actor, who is an early Oscar tip for Loving and also stars in the ‘entrancing’ Iona, talks about the ‘white Oscars’ controversy and her desire to move home 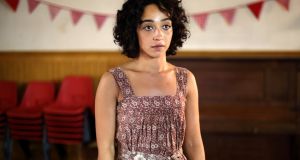 ‘I’m so sorry,” says Ruth Negga. “How do I explain this? I’m always trying to figure these things out in my head. But saying them aloud is another thing. I’m not the most articulate person.”

It’s not as bad as all that. True, the Irish-Ethiopian actor speaks carefully and sometimes haltingly; one gets the sense that she would really rather not say the wrong thing. She is, however, as articulate as they come.

“Sometimes people know me from Marvel’s Agents of SHIELD,” she says. “But that usually only happens in America. Not so much here.”

Here is London, where Negga has based herself for the past decade and where she lives with her partner, Dominic Cooper, a fellow thespian. Both are signed up for her next film, Preacher; as we speak, Negga is preparing to jet off to New Mexico for a five-month shoot. The hotly tipped project is an adaptation of the DC comic-book series by Garth Ennis and Steve Dillon, as cowritten by Seth Rogen and brought to TV by the makers of Breaking Bad.

Long-time Negga watchers will have plenty to savour in 2016. In June she will don a heavy frock as Lady Taria Wrynn, queen-consort of Stormwind, in Warcraft, a film version of the video game from David Bowie’s son, director Duncan Jones.

And sit tight for next spring’s awards season, and Negga is an early Oscar favourite for her work on Jeff Nichols’s Loving, a drama concerning Richard (played by Joel Edgerton) and Mildred Loving (Negga), a married Virginia couple who were given prison sentences under anti-miscegenation laws in 1958.

“The story is all the more extraordinary because they’re ordinary people,” says Negga. “They just wanted to be married.”

What of this year’s heated #oscarssowhite campaign?

“Where do you start?” says the 34-year-old. “Part of me thinks, finally we’re talking about this and finally people aren’t just turning around and saying, ‘Oh, they’re banging on about racial parity again’. It’s a good thing that this has become a mainstream conversation. But just expanding the membership of the Academy to include more minorities, that’s kind of a distraction really.

“America has a black president, but there are no black studio heads and there just aren’t that many black people working anywhere on film sets, let alone in positions of power in Hollywood. That’s what needs to change. Because if we don’t have parity in media – where such things are visible – then how will there be parity in other sectors? They can’t use the excuse that black films don’t make money, because the box office proves that they do.”

Tulip – as Negga’s character in Preacher is called – was originally a trashy blonde. Her casting in Iona, a drama from Shell director Scott Graham, was similarly colour-blind. The film sees a single mother (Negga) and her teenage son (newcomer Ben Gallagher) fleeing to the Inner Hebridean island of the title and the tight religious community where she grew up, following a violent incident and botched cover-up.

“The final product is extremely beautiful and entrancing,” says Negga, with her characteristically soft Limerick consonants. “When I got involved I hadn’t read anything like that script in a very long time. She’s a very contradictory, conflicted character. That’s brave. And I loved the idea of fate that runs through the story.”

Iona was made on a fraction of the budget of something like Warcraft. Such variety has defined Negga’s career. The actor has happily moved between smaller supporting parts – in say, World War Z or Breakfast on Pluto – to headlining turns in the 2005 Irish horror Isolation and in a much-cheered 2011 BBC biopic of Shirley Bassey. She has done Ophelia at London’s Royal National Theatre, a season of Love/Hate for RTÉ and a season of Misfits for Channel 4.

Size, she notes, is not everything. “I never think about that,” she says.“You can’t presume or predict that anything will be a hit or a success,” she says. “There are lots of films that don’t make any kind of impact until much later. It’s nice to be seen, but as an actor it’s beyond my control. You hope for the best. You choose what you want to do based on the process that you have to go through. And you hope that you get them. You can’t know if something will resonate with people.I can’t force or hurry my career or anything else. I don’t know many people who can.”

Negga was born in Addis Ababa in 1982 to an Irish mother and an Ethiopian father. The family moved to Limerick when she was four, although she has certain “sense memories” of Africa.

There were few pomegranate trees in Limerick, but the culture shock was not as traumatic as one might suppose.

Her father died in a car crash when she was seven. She subsequently moved between Limerick and London for schooling, emerging from Trinity College Dublin with a BA in drama.

“I don’t think I ever wavered when it came to my choice of career,” says Negga. “I was quite stubborn about it in many ways. Not that I was ever challenged about it. I wasn’t. I grew up watching a lot of films. I went to the video store and I chose my six videos for the weekend. As a teenager I gravitated towards American indie cinema: Jim Jarmusch, stuff like that.”

After Trinity she moved to London for work. She’s still planning a homecoming.

“Ireland is home,” she says. “And I’d love to move home. That’s always been the plan. When you’re home for Christmas, you always think, I wish I didn’t have to go. When I went to London – about 10 years ago – I thought I needed to be there to be visible. I’m getting more and more hopeful in the last couple of years that things are changing. Most of my work is in Canada or the US now. The last time I worked in the UK is more than a year ago. But I know some people who have gone home and it was tricky. I’m hoping they’ll do something to make it easier for all of us.”