Sorcha’s decided to go back to work, and wants me to stay home to look after the kids 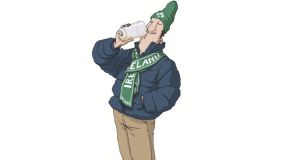 Ross O’Carroll-Kelly: “I know you’re trying to make me feel better, but I know I’m a terrible father”

“Your godfather told me this wonderful joke,” the old man goes, just as I’m about to tee off on the third. “Why is a golfer like a woman? Well, the answer is that they’re both – oh, what was it he said? And then when you do such-and-such, they always bloody well something-something else. Hennessy has all the details. The point is that it was very, very funny, even if some people would argue that it crossed a line.”

We’re in Portmornock Golf Club, playing our annual round to celebrate the week of Father’s Day and it’s, like, the worst I’ve played in about 10 years. It’s not long before the old man brings it up. He goes, “You’re thinking about Joey Carbery going to Munster, aren’t you?”

I’m like, “No. Well, yes – all the time. But the reason I can’t hit the ball straight today is Sorcha. She’s decided to go back to work. Yeah, no – for LinkedIn.”

The old man sort of, like, smiles to himself? “Ross,” he goes, “have you ever read the letter I wrote to The Irish Times after the famous Córas Iompair Éireann announced that it was to allow women to drive its buses for the first time?”

“Well, then you’ll know that I predicted all sorts of dire consequences that would result from the decision. Thousands of commuters would be killed every week and our entire road network – such as it was – would grind to a halt. The reason I had that letter framed was to remind myself just how wrong I can occasionally be. Women make wonderful workers, Ross – oh, they’ve proved it.”

You’ve just committed a serious libel against the man who led Castlerock College to victory in the Leinster Schools Senior Cup and kept the mighty Seapoint in Division 2B of the All Ireland League!

“I’m not worried about what kind of worker she’ll make. Jesus, this is Sorcha we’re talking about – she’ll be the global chief executive of that place within, like, 12 months. What I’m worried about is me.”

“She wants me to stay home to look after the kids.”

“You see, the old Charles O’Carroll-Kelly – inverted commas – would have been reaching for his Mont Blanc pen right about now. But we’re living in a changed world, Ross. We just have to accept it. We’ll always have Portmornock.”

“What in the name of Hades do you mean by that?”

“Yeah, no, unless it’s escaped your attention, I’m a complete moron with a blancmange for a brain.”

“You’ve just committed a serious libel against the man who led Castlerock College to victory in the Leinster Schools Senior Cup and kept the mighty Seapoint in Division 2B of the All Ireland League! And if Paul Meagher was in front of me right now, I’d engage his services and tell the chap to do the bloody well necessary!”

“I know you’re trying to make me feel better, but I know I’m a terrible father.”

“Another gross calumny! You know, I was talking to young Ronan just this morning.”

“He’s taking a huge interest in this private prison that Hennessy and I are building on Lambay Island. He’s drawing up a snag list for me of all the potential security problems – wrinkles, he calls them – in the architectural design. And I thought to myself, what an absolute credit he is to you, Ross.”

“The way Ronan turned out is down to his mother and his friends, especially Nudger and Buckets of Blood.”

I mean, at least Honor had the benefit of Sorcha’s influence to take some of the more extreme edges off her personality

“And then there’s Honor.”

“When I look at her, Ross, she reminds me so much of you.”

“I know that’s intended as a compliment but it’s actually not one?”

Three old dudes arrive at the tee and ask us if they can play through. I’m about to tell them to fock off until the old man goes, “Yes, of course! My son and I are having one of our famous tête-à-têtes – pardon the French! We’ll only hold you up!” and the dudes all thank him and I end up having the most random thought, which is that I wish I was more like him – as a father and as a man.

“I’m worried about the triplets,” I go. “I mean, at least Honor had the benefit of Sorcha’s influence to take some of the more extreme edges off her personality. Brian, Johnny and Leo are just going to have me. And they’re already thugs?”

He’s like, “Thugs? I’ll not listen to another word of this! Let me tell you something, Kicker, those three little chaps are high-spirited, that’s all. And one day they’ll count themselves fortunate to have had you as a father and a mentor.”

“We left them back at the first tee.”

I suddenly take off, covering the ground like Simon literally Zebo. But when I reach the first tee, they’re not there. I’m suddenly, like, screaming their names at the top of my voice, going, “Brian! Leo! Johnny!” but there’s no sign of them.

I’m thinking, yeah, no, it’s Sorcha’s first day at work and I’ve managed to lose three quarters of our children. And she’s bound to notice.

The old man appears beside me, puffing and panting. He’s not as fast on his feet as I am, especially because he’s carrying our two golf bags.

“Had a call… from one of the chaps… in the clubhouse,” he goes. “They’re in… the cor pork… apparently.”

So that’s where we head – again, running all the way. I spot them from, like, 40 yords away. The first thing I notice is that Leo is holding a putter and he’s staring at the old man’s vintage, chocolate-brown Rolls, which only comes out for special occasions.

But, of course, he actually is? He swings the putter and puts a humungous dent in the side of the thing. Then he swings it again and takes out one of the headlights. I manage to reach him and grab the thing out of his hand just after he brings it crashing down a third time on the bonnet.

“Ross,” the old man goes, “do you have any idea how much it’s going to cost to repair this?”