Obituary: The Dublin man was predicted to be ‘one of the significant poets of his generation’ 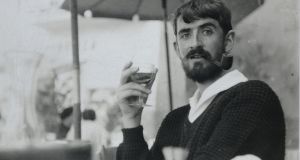 Dublin poet Richard Weber, whose work has been included in numerous Irish and international anthologies, has died aged 87. He began his rise to prominence in the early 1960s, when critics variously described his work as lyrical, reflective and assured.

However, his career as a poet was a relatively short one, with his last book published in 1972. In 1995, poet Rory Brennan lamented his silence, in his overview for Poetry in Contemporary Irish Literature. “Richard Weber is a pellucid lyricist whose two-decade silence is to be greatly regretted,” he wrote. “Having mastered his art, he mysteriously ceased to exercise it. A manufacturer of buzzing squibs, a love poet in the high old manner, a ruminator on the function of literature, a payer of homage to the deserving person and place, Weber must not be overlooked because of his sudden silence.”

Richard Weber was born in September 1932 in Dublin’s Terenure, to Mary Morris and James Weber. He was the eldest of seven children. His talent for drawing and painting was noted early on and, while he was in Synge Street CBS, Brother Gilroy encouraged him to take up an apprenticeship as a commercial artist with the Ormond Printing Company. He left school at 15 but would later return to education and would spend most of his working life in educational institutions.

He was soon working six days a week with the printing company and doing evening classes with the National College of Art on Kildare Street. With the encouragement of a helpful boss, he became a voracious reader and his passion for poetry grew in tandem with his dislike of the commercial pressures on the work of an artist.

He later worked in another printing house, Alex Thom & Co, while honing his poetry skills. His first poems were published in Poetry Ireland when he was 18, and years later, Dolmen Press published his first book. It was a slim volume of a single poem called The Time Being, which was inspired by his favourite poet TS Eliot’s The Waste Land. Dolmen also published his O’Reilly: Poems, and a single poem in broadsheet form about this time. He later described these poems as “juvenilia”, but it was thanks to this published work that he won a scholarship to take up American studies in Salzburg in Austria. He studied the plays of Eugene O’Neill and received a diploma, while also editing an Irish poetry issue of the University of Cambridge magazine Delta.

A move to London followed, where his jobs included being a lamplighter and working as a bookseller’s assistant. He occasionally gave readings from his work and this helped secure him a job as an assistant to Percy Lubbock in Italy. Lubbock edited some of Henry James’s work and wrote the influential and controversial The Craft of Fiction.

After another stint in London, Weber returned home in 1961 when his mother became ill, and he took up a job with the Chester Beatty Library. His work was brought to a much larger audience in 1962 with his inclusion by Robin Skelton in Six Irish Poets, published by Oxford University Press. His poems were published alongside those of Austin Clarke, Thomas Kinsella, John Montague, Richard Murphy and Richard Kell. This was followed by his first full collection, Lady & Gentleman, which was published by Dolmen Press in 1963. It was also published by Oxford University Press in Britain and Dufour Editions in the US.

Of his first collection, the Times Literary Supplement said: “. . . such a breath of fresh air reminds us once again how much we owe to the Irish in the present era of English literature.”

In the previous year, Weber was one of a group of young poets who revived Poetry Ireland’s magazine under the editorship of John Jordan. Weber was on the editorial board, along with John Jordan, James Liddy and James McAuley.

He met his wife, Sigrid Stöhr, when she came from Germany to pursue her studies of WB Yeats in Trinity College. They married in 1966 and both began working in the University of Massachusetts in Amherst the following year. Richard was subsequently awarded a BA for his published work and the couple’s daughter Niamh was born there. Their family would be complete in 1977 when son Niall was born, back in Ireland.

Richard and Sigrid had moved to work in Mount Holyoke College when his second collection Stephen’s Green Revisited was published, by the same three publishing houses as his first, in 1968. Welcoming the originality of his work, Poetry – the Chicago magazine – said Weber looked like he was going to create “an individual and valuable poetic identity . . . he should prove one of the truly significant poets of his generation”.

The title poem contained a line that has often been quoted since: “But sadness is surely the secret mother of memory”, most recently by Anthony Glavin as a preface in his book Colours Other Than Blue.

The Weber family moved back to Ireland in 1970, setting up home in Ballyknockan, Co Wicklow. Richard took up a job in the library of the National College of Art and became a slide librarian there. He also set up his own publishing concern, Ballyknockan Press, which published his last poetry collection, A Few Small Ones, in 1972.

When the rural idyll of Ballyknockan proved too challenging, the family made their home in Blackrock, Co Dublin. This is where Richard and Sigrid grew old, until ill health forced them to move to full-time care. Sigrid passed away in 2018, at a time when Richard was also facing health challenges. He died after contracting Covid-19, on April 15th, 2020.

The poem he was most proud of, according to his family, was A Visit to Bridge House, written as a tribute to his friend Austin Clarke on his 70th birthday. He was a frequent visitor to Clarke’s home at Templeogue Bridge and championed his work. Among the other friends in his literary and artistic circle were the stained-glass artist Patrick Pye, the weaver Nóirín Pye, and artists Barbara Warren and William Carron.

In their tributes, Weber’s family members and friends remembered an entertaining conversationalist with a mischievous wit, who often surprised with his original insights. Pádraig Ó Snodaigh of the Irish-language publisher Coiscéim said he was a “gentle bohemian” whose publications were always anticipated and appreciated. Ó Snodaigh said he lived in hope that some unpublished work might yet surface.