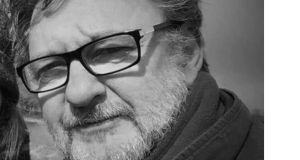 The recession of the 1980s was a difficult time in Ireland, forcing countless people to emigrate. But there were many who didn’t leave because they had ideas,plans and dreams, and were prepared to fight to make a contribution to the country’s regeneration. One of those was Liam O’Neill,  who has died as a result of coronavirus at the age of 64.

His strong sense of commitment may have been due to the fact that he was born in Chicago, first-generation Irish, his mother returning to Dublin with him and his siblings in 1968, when he was 12.

One of the first graduates of the fledgling film course at Dún Laoghaire Art College (now the National Film School), he emerged in the mid-1980s as a budding director, writer and cinematographer, at a time when there was virtually no film industry here. Despite this, there were ideas, plans, and ambitions in the air. Organisations emerged to support film-makers and to lobby for a more positive policy towards the industry, and O’Neill was highly active in these.

For four years in the early 1990s, he was chairman of Film Base, the film-makers’ resource centre, which was followed by participation on the board of the EU-funded Media Desk. Both organisations in their own way contributed to the blossoming of the Irish film industry and the energy behind them formed an important part of the impetus for the reconstitution of the Irish Film Board (now Screen Ireland) in 1993.

While developing his early film projects, he worked with Co-Motion Theatre Company for a number of years, producing, directing, doing lighting design and photography, and was involved with a number of key productions at the Dublin Theatre Festival between 1988 and 1991,

He also conceived and co-founded the Irish Film and Television Network, which continues to this day as an important information resource for the film and television business.

O’Neill contributed a huge amount of energy and time to these enterprises on a voluntary basis, and they are an important part of the early chapters of the history of Ireland’s current media landscape.

As that landscape improved, he set up Paradox Pictures in 1990, producing a significant number of feature films, including Pete’s Meteor, which premiered as part of the 1998 Berlinale, How Harry Became a Tree, premiering in competition at the 2001 Venice Film Festival, and Separation Anxiety.

He was always prepared to produce and help other film-makers get their films made. While a student, he reached out to those in the years below him in a respectful and inclusive way. Later, as a lecturer, he brought the same qualities to his teaching work at various institutions including the National Film School, NCAD, and the Dundalk Institute of Technology.

But his own first love was directing and writing, and his credits include Frankie and Johnnie, The Barber Shop, Northern Lights, Lost and Found, and most recently Danny Boy, and Kathleen. When he fell ill he was preparing to shoot a film he co-wrote, The Spectator, and was completing the development of a feature film script, Hiding in Plain Sight, that he intended to direct.

He brought great commitment and generosity to his work with and for other people, but he was also a man with a strong sense of social and political commitment, of which his creative work was a part. Even in the middle of the enormous stress that film production can generate, he fought his way through those situations with determination and good humour and will be fondly remembered by the many people who were the recipients of his friendship and generosity over the many decades he was active in the media business.

He is survived by his partner, Annabel Konig, and by their children, Ben and Ella.