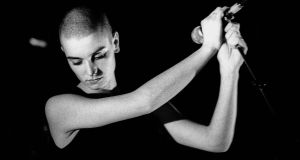 Everyone should have a pandemic pal like Q. I called him the other night for a video chat. It was late in Ireland but dinnertime in Self-Isolating Manhattan. He was gingerly dropping spaghetti into boiling water and heating up meatball sauce in a microwave. For a moment I didn’t recognise him. I thought I’d accidentally contacted the electro pop artist Moby, also New York based, even though I don’t actually have his number.

“Your hair,” I said. But what I meant was “Where the feck is your hair?” He went and found his electric clippers and held them up to the camera, and we laughed. “My therapist was just telling me I have a lovely shaped head.”

She’s right, his therapist. It turns out he has a gorgeous-shaped noggin. And fetching eyebrows, of which I had previously not taken much notice.

As several people have concluded lately, hairwise, it’s only a matter of time before many of us join my friend Q in going full-on Sinéad O’Connor. He went early, like a baldy Wild West pioneer fed up looking at his tufty bits on video conferencing calls.

For the rest of us it will take more time. There will be many a botched box-hair-dye job, hundreds of partner-on-partner kitchen-scissor dramas, but eventually some people, and not just men, will get the clippers out and go all Dalai Lama on themselves.

I drank red wine and ate cheese and crackers while Q had his dinner. We laughed and vented for two hours. This was our first time having virtual dinner since he left Dublin years ago, but we’ve already made plans to do it again.

As you’ve probably noticed by now, certain friends are coming into their own during this time. Even in the pre-pandemic era, G and his wife, E, were already stand-out people. For example, G converted his dining table into a table-tennis one, employing a spirit level to ensure perfect playing conditions. G does not know how to do things by halves.

He is, among his many and varied talents, an excellent chef. Before all of this G and E used to invite a gang of us around with our kids for lunches that went on into the night, serving up morsels of deliciousness – duck confit and forced rhubarb several ways. We ate standing up and had marathon ping-pong sessions.

Last week he announced a “click and collect” of his legendary buttermilk fried chicken and Asian slaw. My daughters made chocolate cake with Oreo icing that we bartered outside G and E’s house at a socially responsible distance. Devouring fried chicken, all greasy hands and grateful bellies, made by for you by your friend in a global crisis is a unique and beautiful experience.

Because we’re all scared in different ways aren’t we? For different reasons. There are friends we can be more honest about this with than others. S is my tell-her-everything friend. We all have an S who listens and doesn’t interrupt as we rehearse the growing list of anxieties we are trying to minimise.

The death toll is rising, there are fewer places that feel safe; our parents are worried; our parents are sick; our parents are failing. We know someone who has it; our sister is a nurse; we think we have it; we saw someone spitting in the street; we didn’t go out for three days; we haven’t enough money; we can’t pay the rent; work is sending ominous emails.

There is no work.

We clap on our doorsteps for the healthcare heroes, and it feels good but it does not feel like enough. We have no control. There is nothing we can do. We shout at the kids. We’re drinking too much. We want to run away. We are stuck. It will get worse. Leo says it will get worse. He can’t say when it will get better.

Friends like S say the right things. They tell you about new words like “caremongering”, which was coined as a counterpoint to all the coronavirus scaremongering. Apparently, the caremonger movement started in Toronto, with citizens signing up to help get food and essential supplies to the most vulnerable. Now it’s global.

Caremongers India is an online collective run by a single mother in New Delhi who fields 450 calls a day from people who need help or who want to help those most affected.

But my friend S says that, as well as helping others, it’s also important to be caremongers for ourselves. Self-caremongers. Whatever form that takes.

We’ve never needed our friends more. I am grateful for mine. PH offers guaranteed laughs. Two Ps, T and A join me for virtual Friday-night singing sessions that are, it turns out, just as good for the soul as the real thing. R understands the importance of Isolation Wine. M makes me feel special and loved. PLM tells me about the birds. A gives me updates about her husband’s Larry David moments. C tells me how to turn my soups into stewp. J holds my hand in the dark.

Friends are the little lifeboats we need at this time. Keeping their distance, keeping us afloat. There are better days coming. But until then our pandemic pals are making these days a bit better. Thank you to all of them.

Róisín Ingle: Even Matt Damon has fecked off back home
10