Childhood in England explains two endearing idiosyncrasies: his accent and his love of Liverpool FC 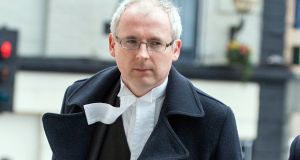 Paul Anthony McDermott who has died following a short illness, was widely regarded as one of the leading academic lawyers and barristers of his generation.

Whilst it is common for academics to dabble in practice and for barristers to lecture law, few other Irish lawyers, with the distinguished exception of Gerard Hogan, now Advocate General at the European Court of Justice, have simultaneously been regarded as leading academics and practitioners.

The tragedy of his passing at the age of 47 on Tuesday is that he died before his legal and writing talents could have found full expression in the judicial career for which he always seemed destined.

He was born to Irish parents living in London in 1972. The family returned to live in Clontarf, Dublin when in his early teens. He attended St Paul’s College, Raheny and his formative years accounted for a legendary work ethic, a strong belief in the rule of law and an expectation that career advancement should derive from merit rather than patronage.

His childhood in England also explained two of his endearing idiosyncrasies, an accent which occasionally veered towards a lisp, the provenance of which always puzzled those unfamiliar with his upbringing, and a devotion to Liverpool’s stuttering fortunes in the Premier League.

From the time that he commenced studying law in UCD in 1991, his career was one of extraordinary accomplishment.

A prodigiously talented student debater, he served two terms as Records Secretary of the UCD Law Society and, amongst many other achievements, was a winner of The Irish Times debate with Helen Boyle in 1996. His particular skill was to fuse an intuitive capacity for stand-up comedy with erudition on serious topics.

He graduated in first place with a BCL degree in 1994, before completing an LLM at Cambridge and a PhD in UCD where the then Dean, Professor Paul O’Connor was quick to identify his skills and recruit him as a member of the Faculty. He continued to lecture in what is now the Sutherland Law School for more than two decades up to the time to his death where his powerful intellect and ever-present humour were appreciated in equal measure by generations of law students.

His PhD thesis on the law on Res Judicata became his first published work and it was quickly followed by lengthy texts on Contract Law and Prison Law, all of which were published when he was still in his 20s, productivity unparalleled in Irish legal academic history.

He was called to the Bar in first place as the John Brooke Scholar in 1996 and quickly established a substantial practice, particularly in the public law sphere. He acted in a wide variety of litigation, but will be best remembered for his representation of the State, whom he always regarded as a privilege to represent, in many significant Constitutional law cases.

He acted for the State in leading Supreme Court cases such as Maguire v. Ardagh and A v. Governor of Arbour Hill Prison. The DPP, one of many clients who constantly sought out his services, instructed him in the trial of Sean Fitzpatrick, the longest criminal trial in the history of the State.

He was a prolific contributor to conferences and public debate on legal topics. He frequently appeared on RTÉ news and current affairs programmes as a legal expert and authored a fortnightly column in The Sunday Times. Despite his busy schedule, he always made time to attend Irish soccer and rugby matches and provide fervent support to the home team.

He was widely known as Paul Anthony McDermott in order to distinguish him from his namesake at the Bar, Paul McDermott, a Judge of the High Court since 2012.

He bore his grave illness with characteristic fortitude and serenity. His religious faith, the love of his family, the exemplary care provided in the Donal Hollywood Unit at St James’s Hospital and the good wishes of his friends and colleagues sustained him through adversity. He retained his acerbic wit to the end.

He is survived by his wife Annick, two sons Harry and Andrew, his mother Margaret, and his brother James, also a barrister and a UCD law lecturer, who co-authored the second edition of his Contract Law text in 2017. His father predeceased him in March 2018.

Pasta is not past it when it comes to nutrition

Recycling, reusing and reimagining rubbish into clothing and accessories
5